Module 3: Motions of the Moon, Sun, and Stars 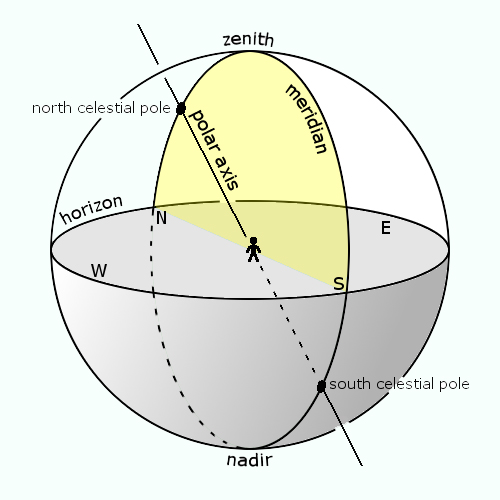 The Celestial Sphere is an imaginary sphere on which all the objects in the sky appear when observed from a specific place, which also appears to move. This sphere appears to surround the Earth. The Sun and Moon, as well as the bright planets, also appear on the Celestial Sphere, moving independently from the background of stars.

Directions on Earth, in the Universe

On the Earth we use several directional indicators. We use North, East, South, and West. North is 0o, East is 90o, South is 180o, and West is 270o. We use latitude and longitude. Latitude is an imaginary line that runs north or south from the Earth’s equator, and longitude runs east or west from the Earth’s meridian. We use similar directional and positional indicators for other Solar System bodies.

Points on the Celestial Sphere

The Celestial Equator is a projection of Earth’s equator onto the Celestial Sphere. The Ecliptic is the Sun’s annual path across the Celestial Sphere. Note that the Ecliptic is not the same location as the Celestial Equator due to Earth’s tilt of approximately 23.4°. The Zenith is the point directly overhead. And the Meridian is an imaginary line from due north to the zenith to due south. The Meridian divides the sky into halves and can be considered a division between rising objects – those to the east of the meridian, and setting objects – those to the west of the meridian.

Let’s go back to the North, East, South, and West system. Generally speaking, objects rise in the East and set in the West. This depends on the object’s location on the Celestial Sphere and the observer’s location on Earth. For example, if you live at the North or South Poles, the stars will simply circle, neither rising nor setting.