As the structure of family changes over time, so do the challenges families face. Events like divorce and remarriage present new difficulties for families and individuals. Other long-standing domestic issues such as abuse continue to strain the health and stability of today’s families.

Divorce, while fairly common and accepted in modern U.S. society, was once a word that would only be whispered and was accompanied by gestures of disapproval. In 1960, divorce was generally uncommon, affecting only 9.1 out of every 1,000 married persons. That number more than doubled (to 20.3) by 1975 and peaked in 1980 at 22.6 (Popenoe 2007). Over the last quarter century, divorce rates have dropped steadily and are now similar to those in 1970. The dramatic increase in divorce rates after the 1960s has been associated with the liberalization of divorce laws and the shift in societal make up due to women increasingly entering the workforce (Michael 1978). The decrease in divorce rates can be attributed to two probable factors: an increase in the age at which people get married, and an increased level of education among those who marry—both of which have been found to promote greater marital stability.

Divorce does not occur equally among all people in the United States; some segments of the U.S. population are more likely to divorce than others. According the American Community Survey (ACS), men and women in the Northeast have the lowest rates of divorce at 7.2 and 7.5 per 1,000 people. The South has the highest rate of divorce at 10.2 for men and 11.1 for women. Divorce rates are likely higher in the South because marriage rates are higher and marriage occurs at younger-than-average ages in this region. In the Northeast, the marriage rate is lower and first marriages tend to be delayed; therefore, the divorce rate is lower (U.S. Census Bureau 2011).

The rate of divorce also varies by race. In a 2009 ACS study, American Indian and Alaskan Natives reported the highest percentages of currently divorced individuals (12.6 percent) followed by blacks (11.5 percent), whites (10.8 percent), Pacific Islanders (8 percent), Latinos (7.8 percent) and Asians (4.9 percent) (ACS 2011). In general those who marry at a later age, have a college education have lower rates of divorce.

So what causes divorce? While more young people are choosing to postpone or opt out of marriage, those who enter into the union do so with the expectation that it will last. A great deal of marital problems can be related to stress, especially financial stress. According to researchers participating in the University of Virginia’s National Marriage Project, couples who enter marriage without a strong asset base (like a home, savings, and a retirement plan) are 70 percent more likely to be divorced after three years than are couples with at least $10,000 in assets. This is connected to factors such as age and education level that correlate with low incomes.

The addition of children to a marriage creates added financial and emotional stress. Research has established that marriages enter their most stressful phase upon the birth of the first child (Popenoe and Whitehead 2007). This is particularly true for couples who have multiples (twins, triplets, and so on). Married couples with twins or triplets are 17 percent more likely to divorce than those with children from single births (McKay 2010). Another contributor to the likelihood of divorce is a general decline in marital satisfaction over time. As people get older, they may find that their values and life goals no longer match up with those of their spouse (Popenoe and Whitehead 2004).

Divorce is thought to have a cyclical pattern. Children of divorced parents are 40 percent more likely to divorce than children of married parents. And when we consider children whose parents divorced and then remarried, the likelihood of their own divorce rises to 91 percent (Wolfinger 2005). This might result from being socialized to a mindset that a broken marriage can be replaced rather than repaired (Wolfinger 2005). That sentiment is also reflected in the finding that when both partners of a married couple have been previously divorced, their marriage is 90 percent more likely to end in divorce (Wolfinger 2005). 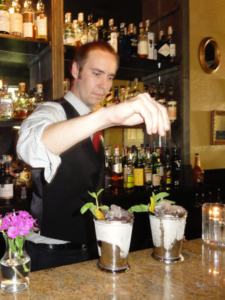 A study from Radford University indicated that bartenders are among the professions with the highest divorce rates (38.4 percent). Other traditionally low-wage industries (like restaurant service, custodial employment, and factory work) are also associated with higher divorce rates. [ “Sporting Chance at the Rail” by Bart Everson is licensed under CC BY 2.0]

People in a second marriage account for approximately 19.3 percent of all married persons, and those who have been married three or more times account for 5.2 percent (U.S. Census Bureau 2011). The vast majority (91 percent) of remarriages occur after divorce; only 9 percent occur after death of a spouse (Kreider 2006). Most men and women remarry within five years of a divorce, with the median length for men (three years) being lower than for women (4.4 years). This length of time has been fairly consistent since the 1950s. The majority of those who remarry are between the ages of twenty-five and forty-four (Kreider 2006). The general pattern of remarriage also shows that whites are more likely to remarry than black Americans.

Children of Divorce and Remarriage

Divorce and remarriage can be stressful on partners and children alike. Divorce is often justified by the notion that children are better off in a divorced family than in a family with parents who do not get along. However, long-term studies determine that to be generally untrue. Research suggests that while marital conflict does not provide an ideal childrearing environment, going through a divorce can be damaging. Children are often confused and frightened by the threat to their family security. They may feel responsible for the divorce and attempt to bring their parents back together, often by sacrificing their own well-being (Amato 2000). Only in high-conflict homes do children benefit from divorce and the subsequent decrease in conflict. The majority of divorces come out of lower-conflict homes, and children from those homes are more negatively impacted by the stress of the divorce than the stress of unhappiness in the marriage (Amato 2000). Studies also suggest that stress levels for children are not improved when a child acquires a stepfamily through marriage. Although there may be increased economic stability, stepfamilies typically have a high level of interpersonal conflict (McLanahan and Sandefur 1994).

Children’s ability to deal with a divorce may depend on their age. Research has found that divorce may be most difficult for school-aged children, as they are old enough to understand the separation but not old enough to understand the reasoning behind it. Older teenagers are more likely to recognize the conflict that led to the divorce but may still feel fear, loneliness, guilt, and pressure to choose sides. Infants and preschool-age children may suffer the heaviest impact from the loss of routine that the marriage offered (Temke 2006).

There is empirical evidence that divorce has not discouraged children in terms of how they view marriage and family. A blended family has additional stress resulting from yours/mine/ours children. The blended family may also have an ex-parent that has different discipline techniques. In a survey conducted by researchers from the University of Michigan, about three-quarters of high school seniors said it was “extremely important” to have a strong marriage and family life. And over half believed it was “very likely” that they would be in a lifelong marriage (Popenoe and Whitehead 2007). These numbers have continued to climb over the last twenty-five years.