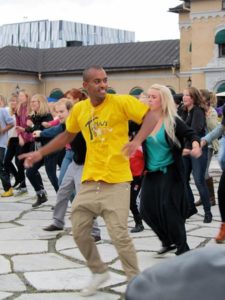 Is this a good time had by all? Some flash mobs may function as political protests, while others are for fun. This flash mob pillow fight’s purpose was to entertain. [“Flash Mob för Fred” by Dimmkim1 is licensed under CC BY 4.0] 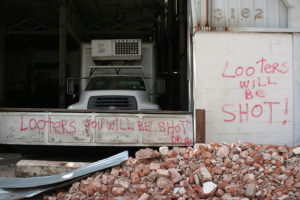 According to the emergent-norm perspective, Hurricane Katrina victims sought needed supplies for survival, but to outsiders their behavior would normally be seen as looting.
[“Looter warning post-Katrina” by ioerror is licensed under CC BY 2.0]