Reading: Healthcare in the United States 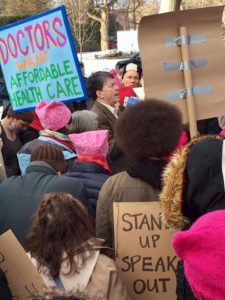 Many people in the United States worry that governmental oversight of healthcare represents a federal overstepping of constitutional guarantees of individual freedom. Others welcome a program that they believe will make healthcare accessible and affordable to everyone. [“Congressman John Faso, Healthcare, ACA protest” by Klkl3000 is licensed under CC BY-SA 4.0]

The PPACA remains contentious. The Supreme Court ruled in the case of National Federation of Independent Businesses v. Sebelius in 2012, that states cannot be forced to participate in the PPACA’s Medicaid expansion. This ruling has opened the door to challenges to the PPACA in Congress and the Federal courts, some state governments, conservative groups and independent businesses.

A concern to public health officials is fear among some parents that certain vaccines such as the measles, mumps, and rubella (MMR) vaccine are linked to higher risk of autism. According to Uchiyama et al (2007), there is no link between the MMR and autism. However fear of this perceived link pushes some parents to refuse the MMR vaccine for their children.

What do you think are the best and worst parts of the PPACA? Why?

Show Answer
b
2. What does the individual mandate provision of the 2010 U.S. healthcare reform do?
Show Answer
c
Show Glossary

individual mandate:
a government rule that requires everyone to have insurance coverage or they will have to pay a penalty

public healthcare:
health insurance that is funded or provided by the government

underinsured:
people who spend at least 10 percent of their income on healthcare costs that are not covered by insurance