Module 13: Population, Urbanization, and the Environment

Children have always contributed to the total number of migrants crossing the southern border of the United States illegally, but in 2014, a steady overall increase in unaccompanied minors from Central America reached crisis proportions when tens of thousands of children from El Salvador, Guatemala, and Honduras crossed the Rio Grande and overwhelmed border patrols and local infrastructure (Dart 2014).

Since legislators passed the William Wilberforce Trafficking Victims Protection Reauthorization Act of 2008 in the last days of the Bush administration, unaccompanied minors from countries that do not share a border with the United States are guaranteed a hearing with an immigration judge where they may request asylum based on a “credible” fear of persecution or torture (U.S. Congress 2008). In some cases, these children are looking for relatives and can be placed with family while awaiting a hearing on their immigration status; in other cases they are held in processing centers until the Department of Health and Human Services makes other arrangements (Popescu 2014).

The 2014 surge placed such a strain on state resources that Texas began transferring the children to Immigration and Naturalization facilities in California and elsewhere, without incident for the most part. On July 1, 2014, however, buses carrying the migrant children were blocked by protesters in Murrietta, California, who chanted, “Go home” and “We don’t want you.” (Fox News and Associated Press 2014; Reyes 2014).

Given the fact that these children are fleeing various kinds of violence and extreme poverty, how should the U.S. government respond? Should the government pass laws granting a general amnesty? Or should it follow a zero-tolerance policy, automatically returning any and all unaccompanied minor migrants to their countries of origin so as to discourage additional immigration that will stress the already overwhelmed system? 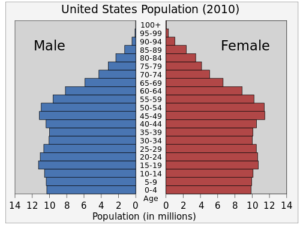 Figure 1. This population pyramid shows the breakdown of the 2010 U.S. population according to age and sex. [USpop2010.svg by Ro4444 is in the Public Domain]

Comparing the three countries in the table above reveals that there are more men than women in Afghanistan, whereas the reverse is true in Sweden and the United States. Afghanistan also has significantly higher fertility and mortality rates than either of the other two countries. Do these statistics surprise you? How do you think the population makeup affects the political climate and economics of the different countries?

demography:
the study of population

mortality rate:
a measure of the number of people in a population who die

population composition:
a snapshot of the demographic profile of a population based on fertility, mortality, and migration rates

population pyramid:
a graphic representation that depicts population distribution according to age and sex

sex ratio:
the ratio of men to women in a given population