There are several major manifest functions associated with education. The first is socialization. Beginning in preschool and kindergarten, students are taught to practice various societal roles. The French sociologist Émile Durkheim (1858–1917), who established the academic discipline of sociology, characterized schools as “socialization agencies that teach children how to get along with others and prepare them for adult economic roles” (Durkheim 1898). Indeed, it seems that schools have taken on this responsibility in full.

This socialization also involves learning the rules and norms of the society as a whole. In the early days of compulsory education, students learned the dominant culture. Today, since the culture of the United States is increasingly diverse, students may learn a variety of cultural norms, not only that of the dominant culture.

School systems in the United States also transmit the core values of the nation through manifest functions like social control. One of the roles of schools is to teach students conformity to law and respect for authority. Obviously, such respect, given to teachers and administrators, will help a student navigate the school environment. This function also prepares students to enter the workplace and the world at large, where they will continue to be subject to people who have authority over them. Fulfillment of this function rests primarily with classroom teachers and instructors who are with students all day. 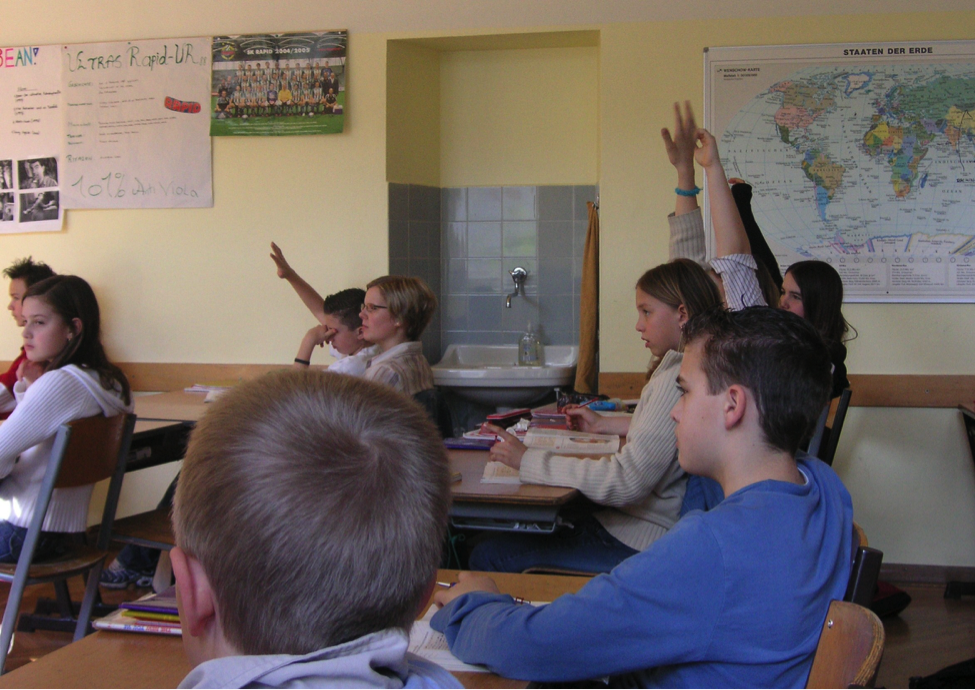 The teacher’s authority in the classroom is a way in which education fulfills the manifest functions of social control. [“Manual communication” by KF is in the Public Domain]

Education also provides one of the major methods used by people for upward social mobility. This function is referred to as social placement. College and graduate schools are viewed as vehicles for moving students closer to the careers that will give them the financial freedom and security they seek. As a result, college students are often more motivated to study areas that they believe will be advantageous on the social ladder. A student might value business courses over a class in Victorian poetry because she sees business class as a stronger vehicle for financial success.

Education also fulfills latent functions. As you well know, much goes on in a school that has little to do with formal education. For example, you might notice an attractive fellow student when he gives a particularly interesting answer in class—catching up with him and making a date speaks to the latent function of courtship fulfilled by exposure to a peer group in the educational setting.

The educational setting introduces students to social networks that might last for years and can help people find jobs after their schooling is complete. Of course, with social media such as Facebook and LinkedIn, these networks are easier than ever to maintain. Another latent function is the ability to work with others in small groups, a skill that is transferable to a workplace and that might not be learned in a homeschool setting.

The educational system, especially as experienced on university campuses, has traditionally provided a place for students to learn about various social issues. There is ample opportunity for social and political advocacy, as well as the ability to develop tolerance to the many views represented on campus. In 2011, the Occupy Wall Street movement swept across college campuses all over the United States, leading to demonstrations in which diverse groups of students were unified with the purpose of changing the political climate of the country.

In the United States, schools also fill the role of preparing students for competition in life. Obviously, athletics foster a competitive nature, but even in the classroom students compete against one another academically. Schools also fill the role of teaching patriotism. Students recite the Pledge of Allegiance each morning and take history classes where they learn about national heroes and the nation’s past. 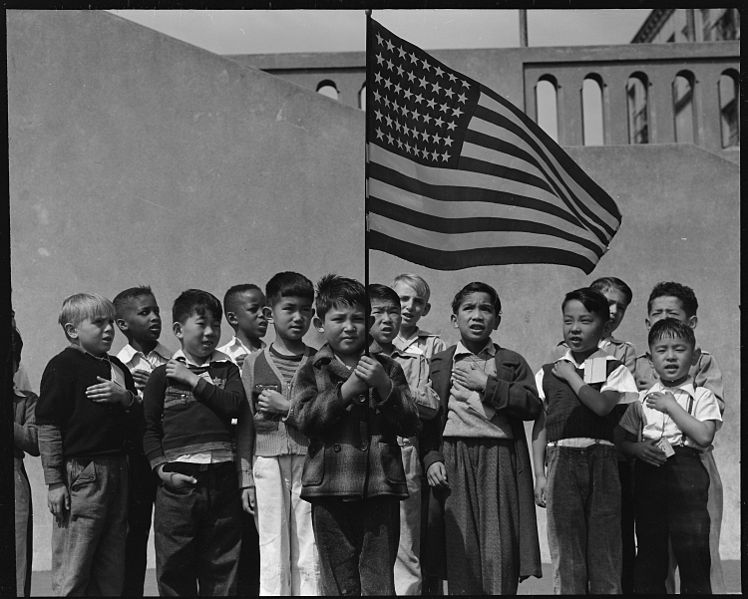 Starting each day with the Pledge of Allegiance is one way in which students are taught patriotism. [“San Francisco, California. Flag of allegiance pledge at Raphael Weill Public School, Geary and Buch . . . – NARA – 537476” by Dorothea Lange is in the Public Domain]

Another role of schools, according to functionalist theory, is that of sorting, or classifying students based on academic merit or potential. The most capable students are identified early in schools through testing and classroom achievements. Such students are placed in accelerated programs in anticipation of successful college attendance.

Functionalists also contend that school, particularly in recent years, is taking over some of the functions that were traditionally undertaken by family. Society relies on schools to teach about human sexuality as well as basic skills such as budgeting and job applications—topics that at one time were addressed by the family.

1. Which of the following is not a manifest function of education?

Show Answer
b
2. Because she plans on achieving success in marketing, Tammie is taking courses on managing social media. This is an example of ________.
Show Answer
c
Show Glossary

social placement:
the use of education to improve one’s social standing