Module 13: Population, Urbanization, and the Environment

Why It Matters: Population, Urbanization, and the Environment

Why describe the nature and growth of population and the resultant impacts on the environment?

As you read this module, consider how an increasing global population can balance environmental concerns with opportunities for industrial and economic growth. Think about how much water pollution can be justified by the need to lower U.S. dependence of foreign energy supplies. Is the potential employment and economic growth associated with fracking worth some environmental degradation? 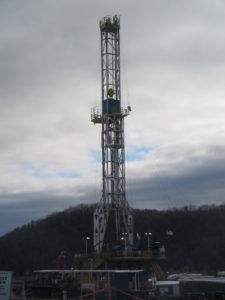 This is a Marcellus shale gas-drilling site in Lycoming County, Pennsylvania. [“Marcellus Shale Gas Drilling Tower” by Ruhrfisch is licensed under CC BY-SA 4.0]

How do sociologists study population and urbanization issues? Functionalist sociologists might focus on the way all aspects of population, urbanization, and the environment serve as vital and cohesive elements, ensuring the continuing stability of society. They might study how the growth of the global population encourages emigration and immigration, and how emigration and immigration serve to strengthen ties between nations. Or they might research the way migration affects environmental issues; for example, how have forced migrations, and the resulting changes in a region’s ability to support a new group, affected both the displaced people and the area of relocation?

A conflict theorist, interested in the creation and reproduction of inequality, might ask how peripheral nations’ lack of family planning affects their overall population in comparison to core nations that tend to have lower fertility rates. Or, how do inner cities become ghettos, nearly devoid of jobs, education, and other opportunities? A conflict theorist might also study environmental racism and other forms of environmental inequality. For example, which parts of New Orleans society were the most responsive to the evacuation order during Hurricane Katrina?