Module 12: Work and the Economy

Reading: Poverty in the United States

Poverty in the United States

When people lose their jobs during a recession or in a changing job market, it takes longer to find a new one, if they can find one at all. If they do, it is often at a much lower wage or not full time. This can force people into poverty. In the United States, we tend to have what is called relative poverty, defined as being unable to live the lifestyle of the average person in your country. This must be contrasted with the absolute poverty that is frequently found in underdeveloped countries and defined as the inability, or near-inability, to afford basic necessities such as food (Byrns 2011).

The unemployment statistics provided by the U.S. government are rarely accurate, because many of the unemployed become discouraged and stop looking for work. Not only that, but these statistics undercount the youngest and oldest workers, the chronically unemployed (e.g., homeless), and seasonal and migrant workers.

A certain amount of unemployment is a direct result of the relative inflexibility of the labor market, considered structural unemployment, which describes when there is a societal level of disjuncture between people seeking jobs and the available jobs. This mismatch can be geographic (they are hiring in California, but most unemployed live in Alabama), technological (skilled workers are replaced by machines, as in the auto industry), or can result from any sudden change in the types of jobs people are seeking versus the types of companies that are hiring.

Because of the high standard of living in the United States, many people are working at full-time jobs but are still poor by the standards of relative poverty. They are the working poor. The United States has a higher percentage of working poor than many other developed countries (Brady, Fullerton and Cross 2010). In terms of employment, the Bureau of Labor Statistics defines the working poor as those who have spent at least 27 weeks working or looking for work, and yet remain below the poverty line. Many of the facts about the working poor are as expected: Those who work only part time are more likely to be classified as working poor than those with full-time employment; higher levels of education lead to less likelihood of being among the working poor; and those with children under 18 are four times more likely than those without children to fall into this category. In 2009, the working poor included 10.4 million Americans, up almost 17 percent from 2008 (U.S. Bureau of Labor Statistics 2011). 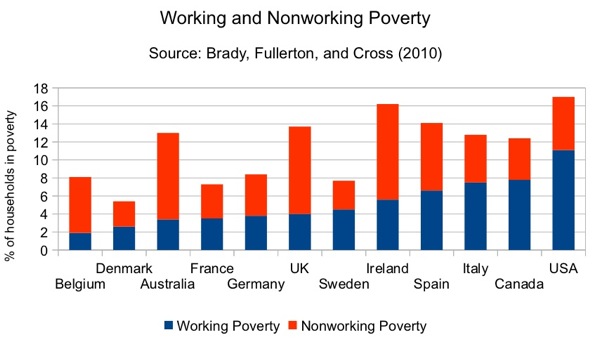 A higher percentage of the people living in poverty in the United States have jobs compared to other developed nations. [“Pov crossnatl.jpeg” by Amcook is licensed under CC BY 3.0]

Most developed countries such as the United States protect their citizens from absolute poverty by providing different levels of social services such as unemployment insurance, welfare, food assistance, and so on. They may also provide job training and retraining so that people can reenter the job market. In the past, the elderly were particularly vulnerable to falling into poverty after they stopped working; however, pensions, retirement plans, and Social Security were designed to help prevent this. A major concern in the United States is the rising number of young people growing up in poverty. Growing up poor can cut off access to the education and services people need to move out of poverty and into stable employment. As we saw, more education was often a key to stability, and those raised in poverty are the ones least able to find well-paying work, perpetuating a cycle.

There is great debate about how much support local, state, and federal governments should give to help the unemployed and underemployed. The decisions made on these issues will have a profound effect on working in the United States.

1. If someone does not earn enough money to pay for the essentials of life he or she is said to be _____ poor.
Show Answer
a
Show Glossary

structural unemployment:
a societal level of disjuncture between people seeking jobs and the jobs that are available

underemployment:
a state in which a person accepts a lower paying, lower status job than his or her education and experience qualifies him or her to perform

Self-Check: Work in the United States