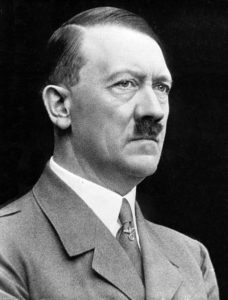 Nazi leader Adolf Hitler was one of the most powerful and destructive dictators in modern history. He is pictured here with fascist Benito Mussolini of Italy. [“Adolf Hitler cropped restored” by German Federal Archives is licensed under CC BY-SA 3.0]