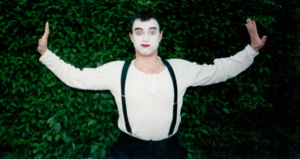 Who are we? What role do we play in society? According to sociologists, we construct reality through our interactions with others. In a way, our day-to-day interactions are like those of actors or mimes on a stage. Pictured is a Mime actor. [“Pantomima-Marko Stojanović.tiff” by Ivana Madzarevic , Wikimedia Commons is licensed under CC BY-SA 4.0]