Reading: Socialization Across the Life Course 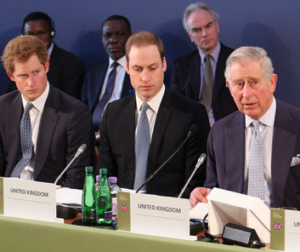 Age transition points require socialization into new roles that can vary widely between societies. Young adults in America are encouraged to enter college or the workforce right away, students in England and India can take a year off like British Princes William and Harry did, while young men in Singapore and Switzerland must serve time in the military. [“Harry, William and Charles (cropped).jpg” by Foreign and Commonwealth Office, Wikimedia Commons is licensed under CC BY 4.0]

Just as young children pretend to be doctors or lawyers, play house, and dress up, adults also engage in anticipatory socialization, the preparation for future life roles. Examples would include a couple who cohabit before marriage or soon-to-be parents who read infant care books and prepare their home for the new arrival. As part of anticipatory socialization, adults who are financially able begin planning for their retirement, saving money, and looking into future healthcare options. The transition into any new life role, despite the social structure that supports it, can be difficult.

Consider a person who is joining a sorority or fraternity, attending college or boarding school, or even a child beginning kindergarten. How is the process the student goes through a form of socialization? What new cultural behaviors must the student adapt to?

1. Which of the following is not an age-related transition point when Americans must be socialized to new roles?

2. Which of the following is true regarding U.S. socialization of recent high school graduates?

anticipatory socialization:
the way we prepare for future life roles

degradation ceremony:
the process by which new members of a total institution lose aspects of their old identities and are given new ones