Sociologists distinguish between two types of systems of stratification. Closed systems accommodate little change in social position. They do not allow people to shift levels and do not permit social relationships between levels. The most extreme closed system of social stratification is that of slavery. Open systems, which are based on achievement, allow movement and interaction between layers and classes. Different systems reflect, emphasize, and foster certain cultural values and shape individual beliefs. Stratification systems include class systems and caste systems, as well as meritocracy.

Systems of slavery are closed stratification systems in which the lowest level has absolutely no control over their social standing. A select group of individuals exercise complete power (and ownership) over an identified group that is offered no access to resources. There is no chance of social mobility of the lowest group. 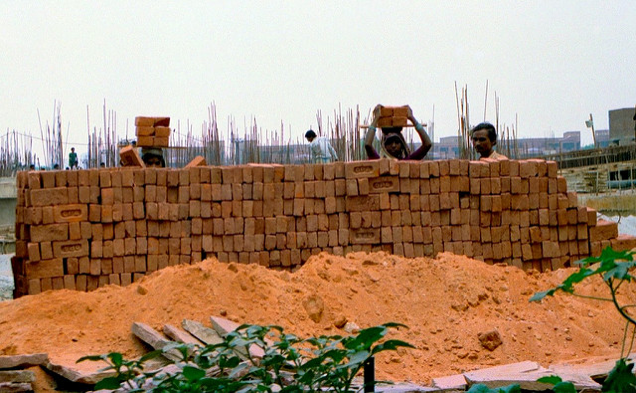 India used to have a rigid caste system. The people in the lowest caste suffered from extreme poverty and were shunned by society. Some aspects of India’s defunct caste system remain socially relevant. In this photo, Indian women of a specific Hindu caste works in construction, and demolishes and builds houses. [“India on the road, women at construction site, New Delhi, 2001” by R Barraez D´Lucca, flickr is licensed under CC BY 2.0]

Caste systems are closed stratification systems in which people can do little or nothing to change their social standing. A caste system is one in which people are born into their social standing and will remain in it their whole lives. People are assigned occupations regardless of their talents, interests, or potential. There are virtually no opportunities to improve a person’s social position.

In the Hindu caste tradition, people were expected to work in the occupation of their caste and to enter into marriage according to their caste. Accepting this social standing was considered a moral duty. Cultural values reinforced the system. Caste systems promote beliefs in fate, destiny, and the will of a higher power, rather than promoting individual freedom as a value. A person who lived in a caste society was socialized to accept his or her social standing.

Although the caste system in India has been officially dismantled, its residual presence in Indian society is deeply embedded. In rural areas, aspects of the tradition are more likely to remain, while urban centers show less evidence of this past. In India’s larger cities, people now have more opportunities to choose their own career paths and marriage partners. As a global center of employment, corporations have introduced merit-based hiring and employment to the nation.

A class system is based on both social factors and individual achievement. A class consists of a set of people who share similar status with regard to factors like wealth, income, education, and occupation. Unlike caste systems, class systems are open. People are free to gain a different level of education or employment than their parents. They can also socialize with and marry members of other classes, which allows people to move from one class to another.

In a class system, occupation is not fixed at birth. Though family and other societal models help guide a person toward a career, personal choice plays a role. A class system allows for social mobility.  A person has a choice in the matter of their outcome. It is this system that nurtures the idea of the American Dream. However, we must remember that this can also lead to an “American Failure,” where one actually falls down the social stratification ladder.

Meritocracy is an ideal system based on the belief that social stratification is the result of personal effort—or merit—that determines social standing. High levels of effort will lead to a high social position, and vice versa. The concept of meritocracy is an ideal—because a society has never existed where social rank was based purely on merit. Because of the complex structure of societies, processes like socialization, and the realities of economic systems, social standing is influenced by multiple factors—not merit alone. Inheritance and pressure to conform to norms, for instance, disrupt the notion of a pure meritocracy. While a meritocracy has never existed, sociologists see aspects of meritocracies in modern societies when they study the role of academic and job performance and the systems in place for evaluating and rewarding achievement in these areas.

To illustrate, let’s consider Susan. Susan earned her high school degree but did not go to college. That factor is a trait of the lower-middle class. She began doing landscaping work, which, as manual labor, is also a trait of lower-middle class or even lower class. However, over time, Susan started her own company. She hired employees. She won larger contracts. She became a business owner and earned a lot of money. Those traits represent the upper-middle class. There are inconsistencies between Susan’s educational level, her occupation, and her income. In a class system, a person can work hard and have little education and still be in middle or upper class, whereas in a caste system that would not be possible. In a class system, low status consistency correlates with having more choices and opportunities.

The Commoner Who Could Be Queen 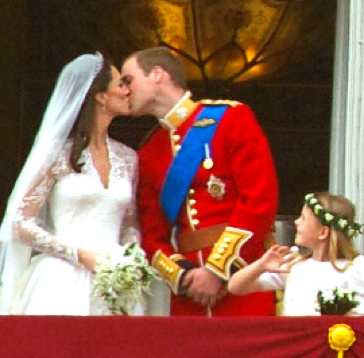 Prince William, Duke of Cambridge, who is in line to be king of England, married Catherine Middleton, a so-called commoner, meaning she does not have royal ancestry. [“Kiss Wedding Prince William of Wales Kate Middleton (revised) 2.jpg” by John Pannell, Wikimedia Commons; license: CC BY ]

On April 29, 2011, in London, England, Prince William, Duke of Cambridge, married Catherine Middleton, a commoner. It is rare, though not unheard of, for a member of the British royal family to marry a commoner. Kate Middleton has an upper-class background, but does not have royal ancestry. Her father was a former flight dispatcher and her mother a former flight attendant and owner of Party Pieces. According to Grace Wong’s 2011 article titled, “Kate Middleton: A family business that built a princess,” “[t]he business grew to the point where [her father] quit his job . . . and it’s evolved from a mom-and-pop outfit run out of a shed . . . into a venture operated out of three converted farm buildings in Berkshire.” Kate and William met when they were both students at the University of St. Andrews in Scotland (Köhler 2010).

Britain’s monarchy arose during the Middle Ages. Its social hierarchy placed royalty at the top and commoners on the bottom. This was generally a closed system, with people born into positions of nobility. Wealth was passed from generation to generation through primogeniture, a law stating that all property would be inherited by the firstborn son. If the family had no son, the land went to the next closest male relation. Women could not inherit property, and their social standing was primarily determined through marriage.

The arrival of the Industrial Revolution changed Britain’s social structure. Commoners moved to cities, got jobs, and made better livings. Gradually, people found new opportunities to increase their wealth and power. Today, the government is a constitutional monarchy with the prime minister and other ministers elected to their positions, and with the royal family’s role being largely ceremonial. The long-ago differences between nobility and commoners have blurred, and the modern class system in Britain is similar to that of the United States (McKee 1996).

Today, the royal family still commands wealth, power, and a great deal of attention. When Queen Elizabeth II retires or passes away, Prince Charles will be first in line to ascend the throne. If he abdicates (chooses not to become king) or dies, the position will go to Prince William. If that happens, Kate Middleton will be called Queen Catherine and hold the position of queen consort. She will be one of the few queens in history to have earned a college degree (Marquand 2011).

There is a great deal of social pressure on her not only to behave as a royal but also to bear children. In fact, Kate and Prince William welcomed their first son, Prince George, on July 22, 2013. On May 2, 2015, they welcomed their second child, a baby girl, Princess Charlotte. The royal family recently changed its succession laws to allow daughters, not just sons, to ascend the throne. Kate’s experience—from commoner to potential queen—demonstrates the fluidity of social position in modern society.

The New York Times investigated social stratification in their series of articles called “Class Matters.” The online accompaniment to the series includes an interactive graphic called “How Class Works,” which tallies four factors—occupation, education, income, and wealth—and places an individual within a certain class and percentile. What class describes you? Test your class rank on the interactive site: How Class Works.

3. Which of these systems allows for the most social mobility?

5. Based on meritocracy, a physician’s assistant would:

caste system:
a system in which people are born into a social standing that they will retain their entire lives

class:
a group who shares a common social status based on factors like wealth, income, education, and occupation

endogamous marriages:
unions of people within the same social category

primogeniture:
a law stating that all property passes to the firstborn son

status consistency:
the consistency, or lack thereof, of an individual’s rank across social categories like income, education, and occupation