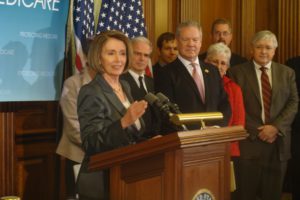 As senior citizens begin to make up a larger percentage of the United States, the organizations supporting them grow stronger. [“Press Conference on Benefits of Health Insurance Reform to Seniors ” by Nancy Pelosi is licensed under CC BY 2.0]