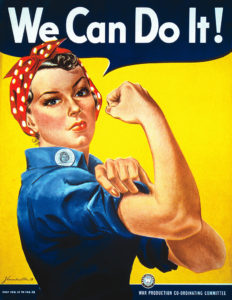 The “We Can Do It!” poster from 1943 was re-appropriated as a symbol of the feminist movement in the 1980s. [We Can Do It! Poster. Authored by: J. Howard Miller from Westinghouse. Provided by: Wikipedia. License: Public Domain]