Socialization is the process through which people are taught to be proficient members of a society. It describes the ways that people come to understand societal norms and expectations, to accept society’s beliefs, and to be aware of societal values. Socialization is not the same as socializing (interacting with others, like family, friends, and coworkers); to be precise, it is a sociological process that occurs through socializing. As Danielle’s story from the beginning of this module illustrates, even the most basic of human activities are learned. You may be surprised to know that even physical tasks like sitting, standing, and walking had not automatically developed for Danielle as she grew. And without socialization, Danielle hadn’t learned about the material culture of her society (the tangible objects a culture uses): for example, she couldn’t hold a spoon, bounce a ball, or use a chair for sitting. She also hadn’t learned its nonmaterial culture, such as its beliefs, values, and norms. She had no understanding of the concept of “family,” didn’t know cultural expectations for using a bathroom for elimination, and had no sense of modesty. Most importantly, she hadn’t learned to use the symbols that make up language—through which we learn about who we are, how we fit with other people, and the natural and social worlds in which we live. 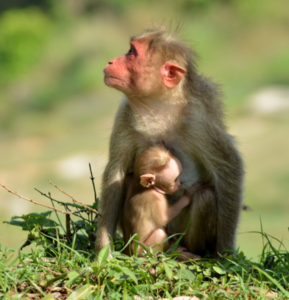 Baby rhesus monkeys, like humans, need to be raised with social contact for healthy development. [“Rhesus Macaques (monkey).jpg” by Raveesh M S, Wikimedia Commons is licensed under CC BY 4.0]

When we are born, we have a genetic makeup and biological traits. However, who we are as human beings develops through social interaction. This argument of biology versus socialization is often referred to as “nature” versus “nurture”. Many scholars, both in the fields of psychology and in sociology, have described the process of self-development as a precursor to understanding how that “self” becomes socialized.

Sociology or Psychology: What’s the Difference?

You might be wondering: if sociologists and psychologists are both interested in people and their behavior, how are these two disciplines different? What do they agree on, and where do their ideas diverge? The answers are complicated, but the distinction is important to scholars in both fields.

As a general difference, we might say that while both disciplines are interested in human behavior, psychologists are focused on how the mind influences that behavior, while sociologists study the role of society in shaping behavior. Psychologists are interested in people’s mental development and how their minds process their world. Sociologists are more likely to focus on how different aspects of society contribute to an individual’s relationship with his world. Another way to think of the difference is that psychologists tend to look inward (mental health, emotional processes), while sociologists tend to look outward (social institutions, cultural norms, interactions with others) to understand human behavior.

Émile Durkheim (1958–1917) was the first to make this distinction in research, when he attributed differences in suicide rates among people to social causes (religious differences) rather than to psychological causes (like their mental wellbeing) (Durkheim 1897). Today, we see this same distinction. For example, a sociologist studying how a couple gets to the point of their first kiss on a date might focus her research on cultural norms for dating, social patterns of sexual activity over time, or how this process is different for seniors than for teens. A psychologist would more likely be interested in the person’s earliest sexual awareness or the mental processing of sexual desire.

Sometimes sociologists and psychologists have collaborated to increase knowledge. In recent decades, however, their fields have become more clearly separated as sociologists increasingly focus on large societal issues and patterns, while psychologists remain honed in on the human mind. Both disciplines make valuable contributions through different approaches that provide us with different types of useful insights.

Psychologist Erik Erikson (1902–1994) created a theory of personality development based, in part, on the work of Freud. However, Erikson believed the personality continued to change over time and was never truly finished. His theory includes eight stages of development, beginning with birth and ending with death. According to Erikson, people move through these stages throughout their lives. In contrast to Freud’s focus on psychosexual stages and basic human urges, Erikson’s view of self-development gave credit to more social aspects, like the way we negotiate between our own base desires and what is socially accepted (Erikson 1982).

Jean Piaget (1896–1980) was a psychologist who specialized in child development who focused specifically on the role of social interactions in their development. He recognized that the development of self evolved through a negotiation between the world as it exists in one’s mind and the world that exists as it is experienced socially (Piaget 1954). All three of these thinkers have contributed to our modern understanding of self-development.

One of the pioneering contributors to sociological perspectives was Charles Cooley (1864–1929). He asserted that people’s self understanding is constructed, in part, by their perception of how others view them—a process termed “the looking glass self” (Cooley 1902).

Later, George Herbert Mead (1863–1931) studied the self, a person’s distinct identity that is developed through social interaction. In order to engage in this process of “self,” an individual has to be able to view him or herself through the eyes of others. That’s not an ability that we are born with (Mead 1934). Through socialization we learn to put ourselves in someone else’s shoes and look at the world through their perspective. This assists us in becoming self-aware, as we look at ourselves from the perspective of the “other.” The case of Danielle, for example, illustrates what happens when social interaction is absent from early experience: Danielle had no ability to see herself as others would see her. From Mead’s point of view, she had no “self.”

How do we go from being newborns to being humans with “selves?” Mead believed that there is a specific path of development that all people go through. During the preparatory stage, children are only capable of imitation: they have no ability to imagine how others see things. They copy the actions of people with whom they regularly interact, such as their mothers and fathers. This is followed by the play stage, during which children begin to take on the role that one other person might have. Thus, children might try on a parent’s point of view by acting out “grownup” behavior, like playing “dress up” and acting out the “mom” role, or talking on a toy telephone the way they see their father do.

During the game stage, children learn to consider several roles at the same time and how those roles interact with each other. They learn to understand interactions involving different people with a variety of purposes. For example, a child at this stage is likely to be aware of the different responsibilities of people in a restaurant who together make for a smooth dining experience (someone seats you, another takes your order, someone else cooks the food, while yet another clears away dirty dishes).

Finally, children develop, understand, and learn the idea of the generalized other, the common behavioral expectations of general society. By this stage of development, an individual is able to imagine how he or she is viewed by one or many others—and thus, from a sociological perspective, to have a “self” (Mead 1934; Mead 1964).

Learn more about Mead’s theory on the self and how self-identity develops in this Khan Academy video.

What a Pretty Little Lady!

“What a cute dress!” “I like the ribbons in your hair.” “Wow, you look so pretty today.”

According to Lisa Bloom, author of Think: Straight Talk for Women to Stay Smart in a Dumbed Down World, most of us use pleasantries like these when we first meet little girls. “So what?” you might ask.

Bloom asserts that we are too focused on the appearance of young girls, and as a result, our society is socializing them to believe that how they look is of vital importance. And Bloom may be on to something. How often do you tell a little boy how attractive his outfit is, how nice looking his shoes are, or how handsome he looks today? To support her assertions, Bloom cites, as one example, that about 50 percent of girls ages three to six worry about being fat (Bloom 2011). We’re talking about kindergarteners who are concerned about their body image. Sociologists are acutely interested in of this type of gender socialization, by which societal expectations of how boys and girls should be—how they should behave, what toys and colors they should like, and how important their attire is—are reinforced.

One solution to this type of gender socialization is being experimented with at the Egalia preschool in Sweden, where children develop in a genderless environment. All the children at Egalia are referred to with neutral terms like “friend” instead of “he” or “she.” Play areas and toys are consciously set up to eliminate any reinforcement of gender expectations (Haney 2011). Egalia strives to eliminate all societal gender norms from these children’s preschool world.

Extreme? Perhaps. So what is the middle ground? Bloom suggests that we start with simple steps: when introduced to a young girl, ask about her favorite book or what she likes. In short, engage with her mind … not her outward appearance (Bloom 2011).

Think of a current issue or pattern that a sociologist might study. What types of questions would the sociologist ask, and what research methods might he employ? Now consider the questions and methods a psychologist might use to study the same issue. Comment on their different approaches.

1. Socialization, as a sociological term, describes:

Show Answer
b
2. The Harlows’ study on rhesus monkeys showed that:
Show Answer
d
3. What is one way to distinguish between psychology and sociology?
Show Answer
d

4. How did nearly complete isolation as a child affect Danielle’s verbal abilities?

generalized other:
the common behavioral expectations of general society

self:
a person’s distinct sense of identity as developed through social interaction
socialization: the process wherein people come to understand societal norms and expectations, to accept society’s beliefs, and to be aware of societal values