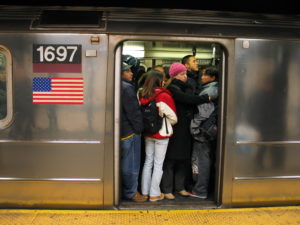 How would a visitor from the suburban United States act and feel on this crowded New York train? [“NYCSub 7 car exterior.jpg” by Daniel Schwen , Wikimedia Commons is licensed under CC BY-SA 3.0]

Often, a comparison of one culture to another will reveal obvious differences. But all cultures also share common elements. Cultural universals are patterns or traits that are globally common to all societies. One example of a cultural universal is the family unit: every human society recognizes a family structure that regulates sexual reproduction and the care of children. Even so, how that family unit is defined and how it functions vary. In many Asian cultures, for example, family members from all generations commonly live together in one household. In these cultures, young adults continue to live in the extended household family structure until they marry and join their spouse’s household, or they may remain and raise their nuclear family within the extended family’s homestead. In the United States, by contrast, individuals are expected to leave home and live independently for a period before forming a family unit that consists of parents and their offspring. Other cultural universals include customs like funeral rites, weddings, and celebrations of births. However, each culture may view the ceremonies quite differently. It is important to note that culture doesn’t just change by location but also changes from one generation to another. The U.S. family structure today is far different than the expected family structure 100 years ago. Culture changes both in time and space.