Christianity Becomes Part of the Establishment

Such an individual was Junius Bassus. He was a member of a senatorial family. His father had held the position of Praetorian prefect, which involved administration of the Western Empire. Junius Bassus held the position of praefectus urbi for Rome. The office of urban prefect was established in the early period of Rome under the kings. It was a position held by members of the most elite families of Rome. In his role as prefect, Junius Bassus was responsible for the administration of the city of Rome. When Junius Bassus died at the age of 42 in the year 359, a sarcophagus was made for him. As recorded in an inscription on the sarcophagus now in the Vatican collection, Junius Bassus had become a convert to Christianity shortly before his death. 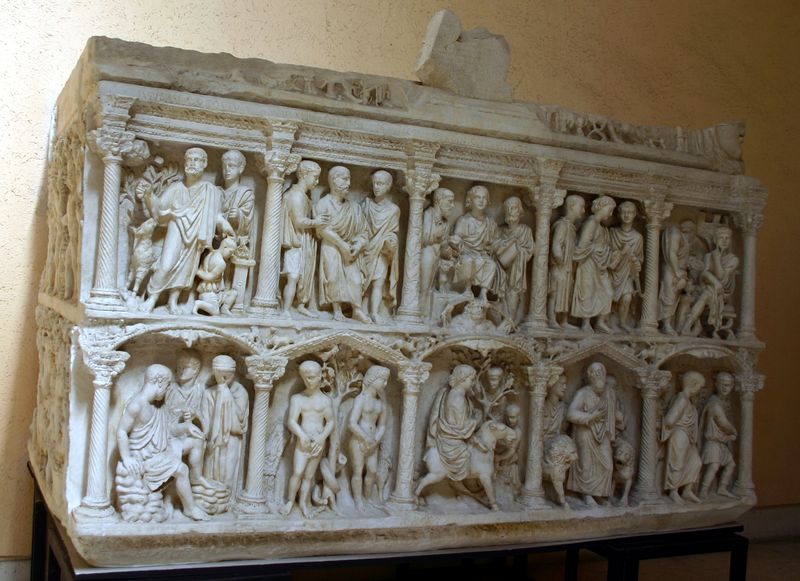 The style and iconography of this sarcophagus reflects the transformed status of Christianity. This is most evident in the image at the center of the upper register. Before the time of Constantine, the figure of Christ was rarely directly represented, but here on the Junius Bassus sarcophagus we see Christ prominently represented not in a narrative representation from the New Testament but in a formula derived from Roman Imperial art. The Traditio Legis (“Giving of the Law”) was a formula in Roman art to give visual testament to the emperor as the sole source of the law.

Already at this early period, artists had articulated identifiable formulas for representing Sts. Peter and Paul. Peter was represented with a bowl haircut and a short cropped beard, while the figure of Paul was represented with a pointed beard and usually a high forehead. In paintings, Peter has white hair and Paul’s hair is black. The early establishment of these formulas was undoubtedly a product of the doctrine of apostolic authority in the early church. Bishops claimed that their authority could be traced back to the original Twelve Apostles. 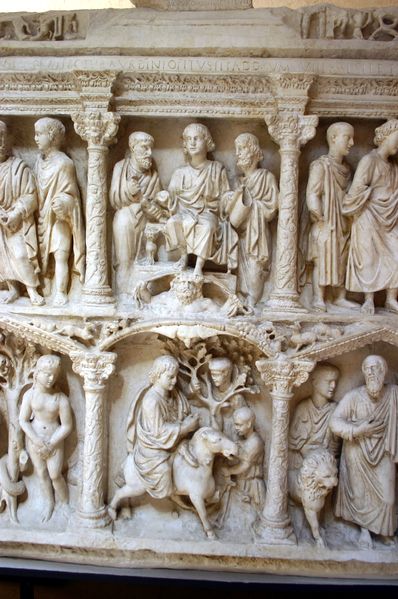 Figure 2. Cast of the central sections: Traditio Legis and the Adventus

Peter and Paul held the status as the principle apostles. The Bishops of Rome have understood themselves in a direct succession back to St. Peter, the founder of the church in Rome and its first bishop. The popularity of the formula of the traditio legis (shown in figure 2) in Christian art in the fourth century was due to the importance of establishing orthodox Christian doctrine.

The feet of Christ in the Junius Bassus relief rest on the head of a bearded, muscular figure, who holds a billowing veil spread over his head. This is another formula derived from Roman art. A comparable figure appears at the top of the cuirass of the Augustus of Primaporta. The figure can be identified as the figure of Caelus, or the heavens. In the context of the Augustan statue, the figure of Caelus signifies Roman authority and its rule of everything earthly, that is, under the heavens. In the Junius Bassus relief, Caelus’s position under Christ’s feet signifies that Christ is the ruler of heaven.

The lower register directly underneath depicts Christ’s Entry into Jerusalem. This image was also based on a formula derived from Roman imperial art. The adventus (shown in figure 2) was a formula devised to show the triumphal arrival of the emperor with figures offering homage. 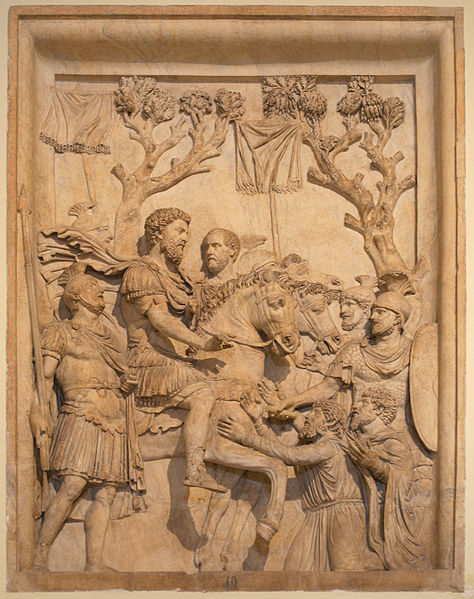 Figure 3. Bas-relief from the Arch of Marcus Aurelius, Rome, now in the Capitoline Museum in Rome. 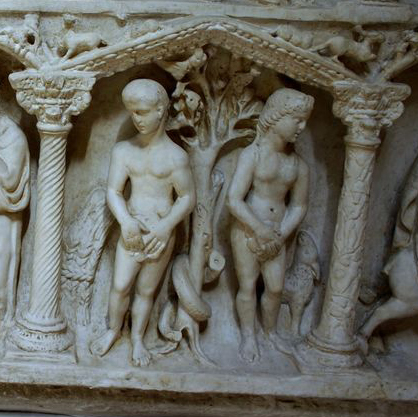 We can determine some intentionality in the inclusion of the Old and New Testament scenes. For example the image of Adam and Eve shown covering their nudity after the Fall was intended to refer to the doctrine of Original Sin that necessitated Christ’s entry into the world to redeem humanity through His death and resurrection. Humanity is thus in need of salvation from this world.

The inclusion of the suffering of Job on the left hand side of the lower register conveyed the meaning how even the righteous must suffer the discomforts and pains of this life. Job is saved only by his unbroken faith in God.

The scene of Daniel in the lion’s den to the right of the Entry into Jerusalem had been popular in earlier Christian art as another example of how salvation is achieved through faith in God. 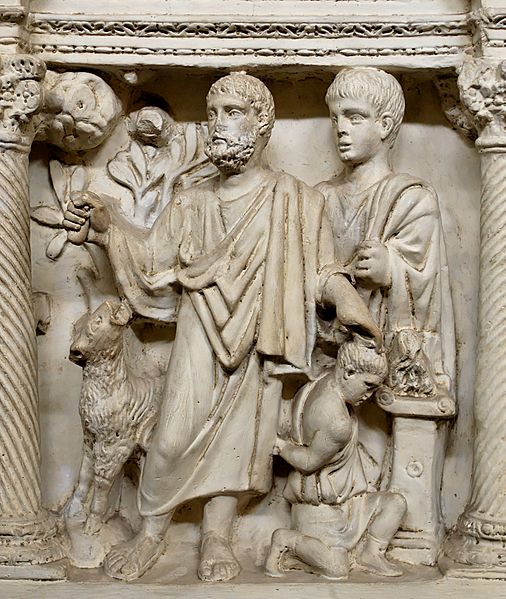 Salvation is a message in the relief of Abraham’s sacrifice of Isaac on the left hand side of the upper register. God challenged Abraham’s faith by commanding Abraham to sacrifice his only son Isaac. At the moment when Abraham is about to carry out the sacrifice his hand is stayed by an angel. Isaac is thus saved. It is likely that the inclusion of this scene in the context of the rest of the sarcophagus had another meaning as well. The story of the father’s sacrifice of his only son was understood to refer to God’s sacrifice of his son, Christ, on the Cross. Early Christian theologians attempting to integrate the Old and New Testaments saw in Old Testament stories prefigurations or precursors of New Testament stories. Throughout Christian art the popularity of Abraham’s Sacrifice of Isaac is explained by its typological reference to the Crucifixion of Christ. 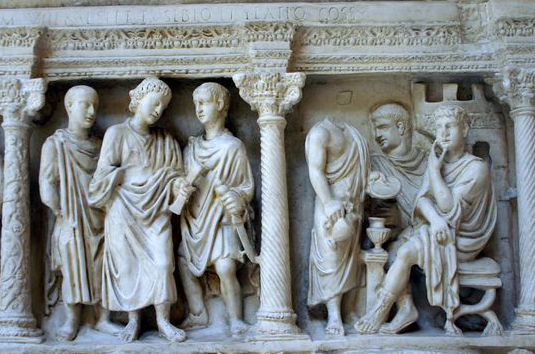 Figure 6. Cast of Christ’s trial before Pilate, with Pilate about to wash his hands.

While not showing directly the Crucifixion of Christ, the inclusion of the Judgment of Pilate in two compartments on the right hand side of the upper register is an early appearance in Christian art of a scene drawn from Christ’s Passion. The scene is based on the formula in Roman art of Justitia, illustrated here by a panel made for Marcus Aurelius. Here the emperor is shown seated on the sella curulis dispensing justice to a barbarian figure. On the sarcophagus Pilate is shown seated also on a sella curulis. The position of Pontius Pilate as the Roman prefect or governor of Judaea undoubtedly carried special meaning for Junius Bassus in his role as praefectus urbi in Rome. Junius Bassus as a senior magistrate would also be entitled to sit on a sella curulis.

Just as Christ was judged by Roman authority, Sts. Peter and Paul were martyred under Roman rule. The remaining two scenes on the sarcophagus represent Sts. Peter and Paul being lead to their martyrdoms. Peter and Paul as the principal apostles of Christ are again given prominence. Their martyrdoms witness Christ’s own death. The artists seem to be making this point by the visual pairing of the scene of St. Peter being led to his matyrdom and the figure of Christ before Pilate. In both scenes the principal figure is flanked by two other figures.

At either end of the Junius Bassus sarcophagus appear Erotes harvesting grapes and wheat. A panel with the same subject was probably a part of a pagan sarcophagus made for a child. This iconography is based on images of the seasons in Roman art. Again the artists have taken conventions from Greek and Roman art and converted it into a Christian context. The wheat and grapes of the classical motif would be understood in the Christian context as a reference to the bread and wine of the Eucharist.

While the dumpy proportions are far from the standards of classical art, the style of the relief especially with the rich folds of drapery and soft facial features can be seen as classic or alluding to the classical style. Comparably the division of the relief into different registers and further subdivided by an architectural framework alludes to the orderly disposition of classical art. This choice of a style that alludes to classical art was undoubtedly intentional. The art of the period is marked by a number of competing styles. Just as rhetoricians were taught at this period to adjust their oratorical style to the intended audience, the choice of the classical style was seen as an indication of the high social status of the patron, Junius Bassus. In a similar way, the representation of the figures in togas was intentional. In Roman art, the toga was traditionally used as a symbol of high social status.

Sarcophagus of Junius Bassus, marble, 359 CE (Treasury of Saint Peter’s Basilica). Please note that due to photography restrictions, the images used in the video show the plaster cast on display in the Vatican Museum. Nevertheless, the audio conversation was recorded in the treasury in Saint Peter’s Basilica, in front of the original sarcophagus.