And the winner of “Miss Arte Italiana” is—drum roll please—Antonio Canova’s Paolina Borghese as Venus Victorious! Or so, at least, is what a recent pole carried out for the Marilena Ferrari Foundation decided. 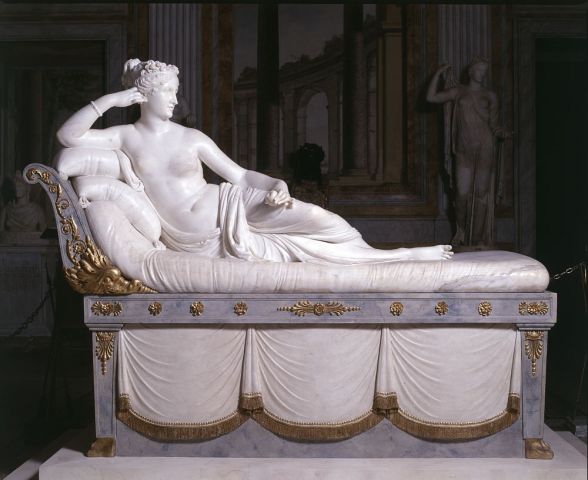 “Miss Italian Art,” a cringeworthy epithet perhaps, but one which, given the strength of the competition, is nothing to sneeze at—works by Botticelli, Leonardo and Titian were also in contention.

Certainly, the semi-nude, life-size portrait of Napoleon’s wayward sister is a sumptuous work of art. Four years in the making, it was commissioned by Paolina’s second husband, the Italian prince, Camillo Borghese, shortly after their marriage in 1804, a union designed to help Napoleon realize his dreams of establishing a pan-European dynasty and legitimize his claims to the Kingdom of Italy.

Anotonio Canova was a leading light of the Neoclassical movement. The style, influenced by the archeological discoveries in Pompeii and Herculaneum as well as the theories of the art historian Johann Wincklemann, looked back to the artistic achievements of the Greeks and Romans with renewed interest, informed by the spirit of rational enquiry that characterized the Age of Enlightenment.

As Inspector General of Antiquities and Fine Art of the Papal States and responsible for acquiring works for the Vatican museums, Canova would have known his Phidias from his Praxiteles. However, he was no slavish imitator. Instead he wished to emulate the works of these earlier artists. 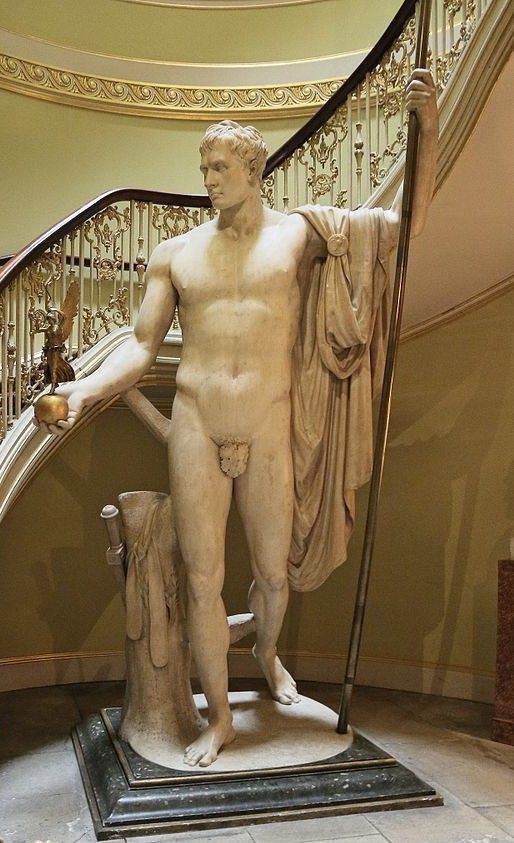 The methods he used demanded absolute precision. Working from numerous preparatory sketches he modeled the form into a life-size clay version. He then cast a plaster model of this which he marked up with points that were transferred on to the marble block. His assistants would carve the marble into shape and only then, for “the last hand”, did Canova raise his chisel, sculpting the form and crucially polishing the marble, using wax, to a fine, glistening finish.

Many of his models were great personalities of the age. Canova would portray them in antique costume. This classicizing of contemporary figures verged sometimes on the ridiculous, as in the colossal nude sculpture of Napoleon as Mars the Peacemaker (figure 2). His portrait of Paolina Borghese is more successful.

Paolina is shown reclining on a pillowed couch in a pose of studied grace, both concentrated and relaxed. The modelling of the nude body is extraordinarily lifelike, while Canova’s treatment of the surface of the marble captures the soft texture of skin. The tactile quality of the piece is bought out particularly in the way the sitter’s own hands are occupied, the fingers of her right connecting ever so lightly with the nape of her neck, offer a gesture charged with seductive promise. The head is raised slightly suggesting that something or someone has suddenly entered her line of vision. The apple she holds in her left hand, her fingers wrapped around it suggestive of erotic touch, identifies her as Venus Victorious, the goddess awarded the Golden Apple of Discord in perhaps the first beauty competition in the history of Western culture. The story comes from ancient Greece. Paris the Trojan prince judged Venus more beautiful than either of her rivals, Minerva and Juno. In return Venus introduced him to a Greek girl called Helen and the rest of course is the stuff of epic poetry.

Originally, Canova was to depict her as Diana, the chaste goddess of the moon and the hunt, a role that more would have require her to have been clothed. Paolina insisted on Venus, though. A bit of a loose cannon with a reputation for promiscuity, the Emperor’s sister enjoyed courting controversy and posing naked would certainly have raised a few eyebrows in polite society. But there was more to it than that. Apparently, the Borghese family believed themselves to be descended from the heroic founder of Rome, Aeneas, who according to Virgil was the son of Venus. The choice then not only suited Paolina’s flirtatious character, but also would have been met with approval by the Borghese family, suggesting continuity between the ancient and modern worlds.

Her hair, a mass of curls bound in a Psyche knot, serves as a visual connector between the two, being worn in imitation of ancient Greek styles as was the fashion of the day. Its careful articulation offsets the smooth shallow planes of her torso. Creating a contrast of another sort, the couch Paolina lies on is carved from a different type of marble, the base part of which is covered in rhythmically flowing drapery, much like on a catafalque, a raised platform used to bear coffins.

The allusion to mortuary art is not that surprising; in Greek and Roman art the reclining female figure is frequently found on sarcophagus lids. So conspicuous an allusion demands further explanation, though, and I suppose if one were forced to read for a meaning here it would have to be the defeat of death by beauty—as expressed through art—that is being celebrated in the image.

Canova’s extraordinary capacity to breathe life into his sculptures was noted by his contemporaries. Literally animated, the sculpture would have been on a revolving mechanism, allowing the static viewer to see the work in the round. It would also have been viewed by candlelight. The finely polished waxy surface would have reflected light brilliantly, creating chiaroscuoro, a more painterly than sculptural effect, perhaps, but then Canova was a painterly sculptor. Paolina owes more to the likes of Giorgione’s Sleeping Venus and Titian’s Venus of Urbino and of course David’s Madame Recamier than antique sculpture a point not lost on the Neo-classical purists of the day who condemned the work as out of keeping with their austere classical theories.

Inevitably the sculpture was going to cause a scandal. While intended for a private audience sophisticated enough to appreciate the classical allusions, given Paolina’s infidelities, the sculpture also served to confirm the rumours about her.

If anything, though, Paolina enjoyed the attention. Asked if she minded having to pose nude, she replied: “Why should I? The studio was heated.” Camillo refused to allow the sculpture to leave his residence. Napoleon agreed.

From Ingres to Renoir, from Proud’hon to Puvis de Chavannes, Paolina Borghese as Venus Victorious had an enormous impact on nineteenth century French artists. It is in the works of the English sculptor John Gibson, though, who Canova took under his wing later on in life, that we find her most faithful devotee.

Animating the figure with pools of reflected light, the glistening waxy surface of his most celebrated work The Tinted Venus (figure 3) owes much to Venus Victorious; together with his own innovative use of polychromy the sculpture provoked outrage among its Victorian audience for whom it appeared a little too real: “a naked, impudent English woman” as one review put her. Canova’s own naked, impudent French woman would have been proud.