Jean-Auguste-Dominique Ingres (pronounced: aah-n Gr-ah) was David’s most famous student. And while this prolific and successful artist was indebted to his teacher, Ingres quickly turned away from him. For his inspiration, Ingres, like David in his youth, rejected the accepted formulas of his day and sought instead to learn directly from the ancient Greek as well as the Italian Renaissance interpretation of this antique ideal.

In 1827, Ingres exhibited Apotheosis of Homer in the annual Salon. His grandest expression of the classical ideal, this nearly seventeen foot long canvas reworks Raphael’s Vatican fresco, The School of Athens, 1509–11, and thus pays tribute to the genius Ingres most admired. As Raphael had done four hundred years earlier, Ingres brought together a pantheon of luminaries. Like secular sacra-conversaziones, the Raphael and the Ingres bring together figures that lived in different eras and places. But while Raphael celebrated the Roman Church’s High Renaissance embrace of Greek intellectuals (philosophers, scientists, etc.), Ingres also includes artists (visual and literary). 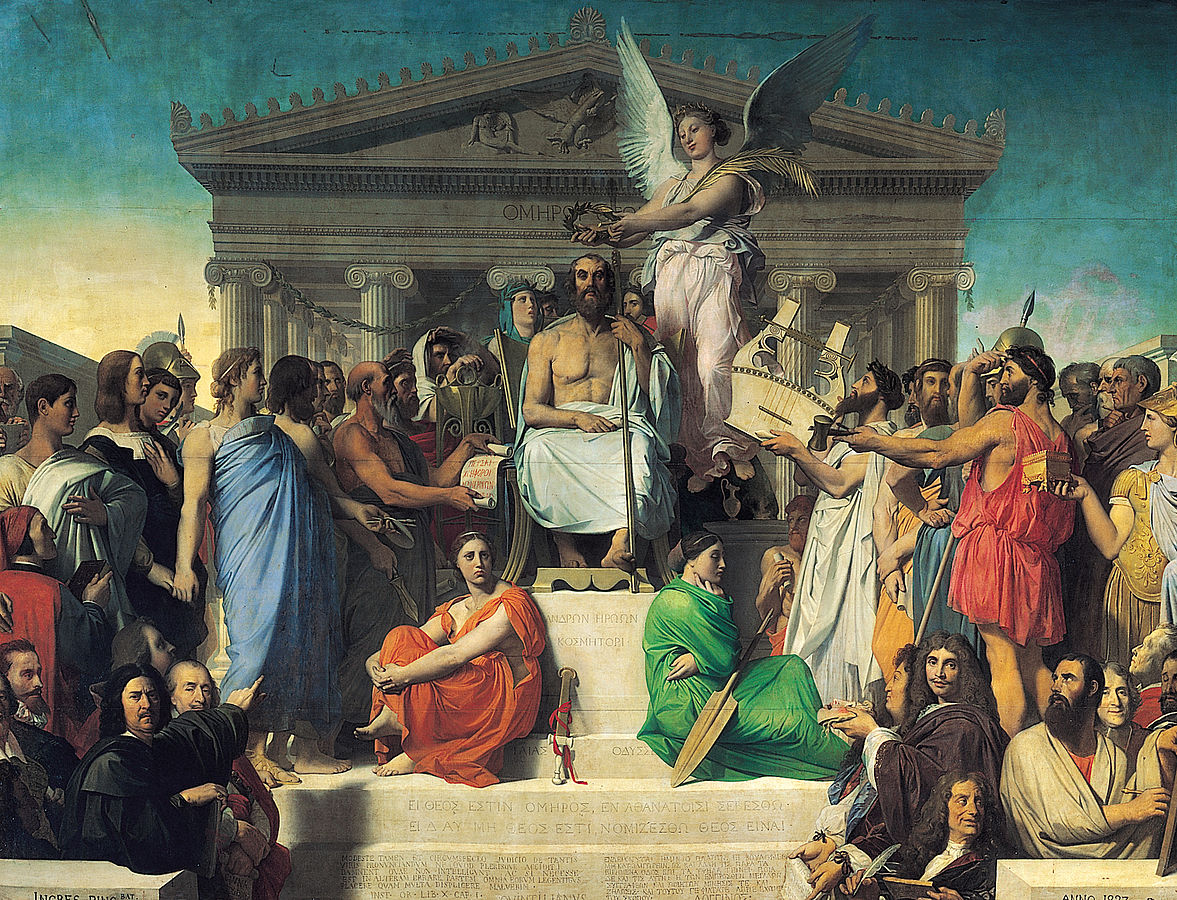 Set on a pedestal at the center of the Apotheosis of Homer, the archaic Greek poet is conceived of as the wellspring from which the later Western artistic tradition flows. The entire composition functions somewhat like a family tree. Homer is framed by both historical and allegorical figures and an Ionic temple that enforces the classical ideals of rational measure and balance. Nike, the winged Greek goddess of the running shoe (ahem, of victory) crowns Homer with a wreath of laurel, while below him sit personifications of his two epic poems, The Odyssey (in green and holding an oar) and The Illiad (in red and seated beside her sword). Note the following figures (please consider their implied importance according to their placement relative to Homer: Dante, the Medieval poet and humanist stands at the extreme left wearing a red scull cap and cape Phidias (the greatest of ancient sculptors is standing to the right of Homer, in red, holding a mallet)Raphael (third from the left edge, top row, in profile and wearing Renaissance garb)Ingres-he’s put himself in rather good company don’t you think? (his is the young face looking out at us beside Raphael)Poussin (he points us toward Homer from the lower left of the canvas) Michelangelo (the bearded figure at lower right).