Bruelleschi & Ghiberti, The Sacrifice of Isaac 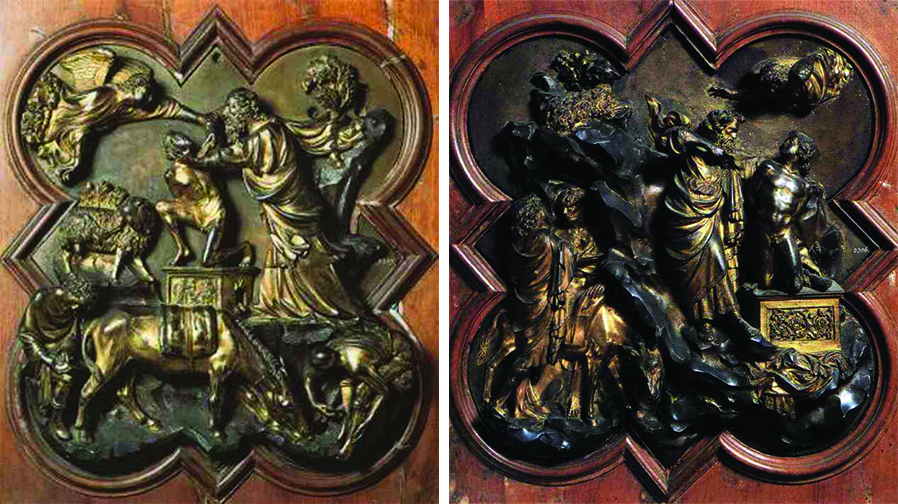 There are three buildings that mark the spiritual center of Florence, the Cathedral (with its dome by Brunelleschi), the bell tower (or campanile, designed by Giotto and decorated with reliefs by Andrea Pisano), and the Baptistery. The Baptistery is a sixth or seventh century octagonal building with three entrances and was particularly beloved by the citizens of Florence, who had been baptized there for centuries.

The Commission for the Doors

In 1401, the cloth merchant’s guild decided to commission a second set of doors for the Florence Baptistery.

The major guilds of Florence had considerable power and were often responsible for maintaining and developing the city’s major public buildings—the cloth merchant’s guild was the most powerful among the guilds.

One set of doors had already been created by Andrea Pisano and were completed in 1360. Two panels survive from the competition for the second set, Brunelleschi’s entry and Ghiberti’s entry. Ghiberti won by a narrow margin.

In the aftermath, Florence experienced an enormous sense of civic pride—including pride in being a Republic where its citizens lived freely. They saw themselves as the heir to the ancient Roman republic and the golden age of Athens in the fifth century BCE.