The Merode Altarpiece is one of the great masterpieces of Northern Renaissance art. The use of objects from the material world to symbolize spiritual ideas, the effort to make the divine accessible to us and part of our world, and the attention to clarity and detail—at the expense of creating a coherent space—are all basic characteristics of the Northern Renaissance style. The first thing you’ll notice about the Merode Altarpiece (located in New York City in the Cloisters, part of the Metropolitan Museum of Art) is that it is not one painting, but three connected paintings, in this case measuring four feet across by two feet high. This is called a triptych (the prefix “tri” means three, as in tricycle). Artists today still use this popular format for a painting. The three panels are connected by hinges (like on a door) so that triptychs usually could open and close. This was important because altarpieces, like this one, were usually closed or covered until the Mass was performed in front of them. 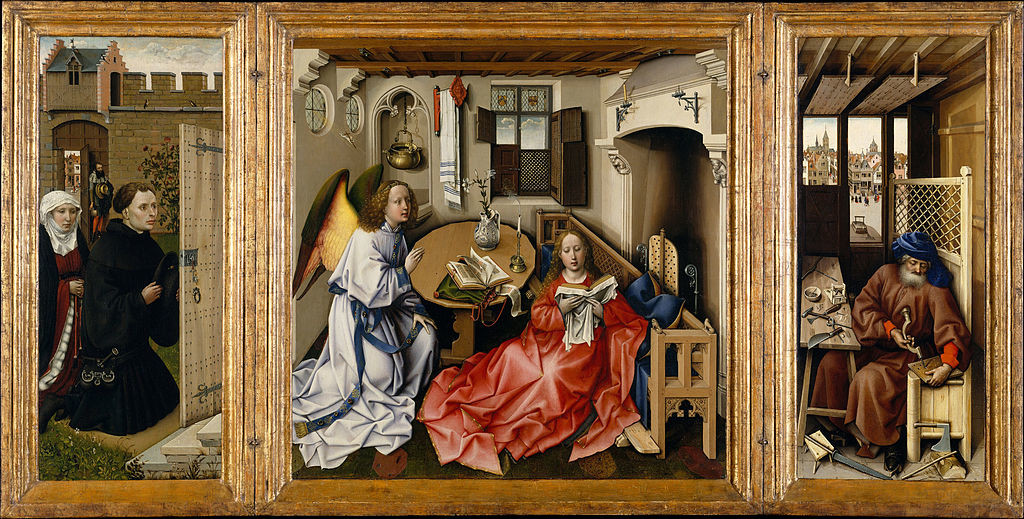 In the panel on the far left, we see the patrons or donors who commissioned this painting. In Flanders, a new middle class of bankers and merchants were commissioning works of art, and wanted images that brought the divine into their own world.

In the center we see the Annunciation, a common subject in the Middle Ages, in the Renaissance and after. Here the Angel Gabriel announces (hence the title “Annunciation”) to Mary that she is about to conceive the Christ child. The Holy Spirit, which impregnates Mary, appears coming through one of the windows on the right in form of a small image of Christ carrying the cross on his back.

The panel on the far right depicts St. Joseph (Mary’s husband), who was a carpenter by trade. He is shown in his carpenter’s shop. Here is one of the amazing characteristics of Northern Renaissance art. Nearly every item that we see in the Merode Altarpiece—even though is looks like an ordinary object—is really a religious symbol. For example, the tools that Joseph is working with are a symbol of the Passion of Christ, the lilies symbolize Mary’s virginity, and the candle that has just been extinguished tells us that this is the moment when God takes human form, and his exclusively divine nature is gone. The material world is imbued with spiritual meaning, with the divine. This is one of the defining characteristics of Northern Renaissance art. But it is not only in their paintings that the people of Flanders used everyday objects to symbolize spiritual ideas; this was a part of their way of thinking.

A Closer Look at the Central Panel

Let’s look carefully at the central panel of the Merode Altarpiece. 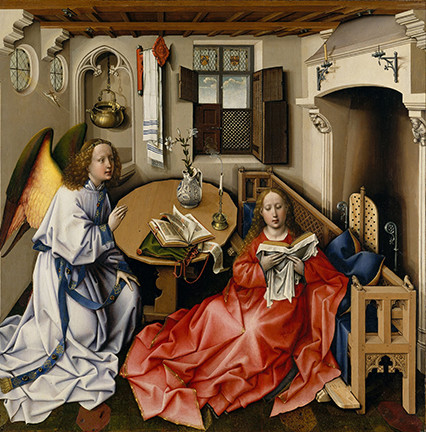 First, notice that the figures have no halos! We can definitely see knees pressing though the drapery. But can we really get a sense of a whole naked body underneath? Do the bodies of Mary and the Angel make sense? Are they in realistic proportion? Does the drapery flow in a way that makes sense? And what about the space? We definitely have an illusion of space, but does the space make sense? How about the table? The shape of the room? There is NO linear perspective here, and NO real study of the human body. The artists of the Northern Renaissance could make their paintings look very real in terms of details—but overall, the space and the body don’t look entirely real. This is a very different kind of realism than we saw in the Italian Renaissance. In the Italian Renaissance, their realism was based on the use of science (anatomy) and math (linear perspective and geometry). The realism of the Northern Renaissance was NOT based on science and math, but it WAS based on a very close observation of the world.