With most artists we know about their lives and personalities from biographies that friends or contemporaries wrote about them. In the case of Michelangelo Merisi da Caravaggio, however, we know about his life primarily from police records! From these accounts, we learn that he had a bad temper and could be violent, and that he was frequently arrested and imprisoned for assault. He appears on the police records for mild offenses like carrying weapons without permission, as well as more serious ones where he is involved in violent fights. He was even questioned once because he “gave offense” to a woman and her daughter—one wonders what that could mean! Ultimately, he killed a man over a bet and spent the last few years of his life on the run from the police. 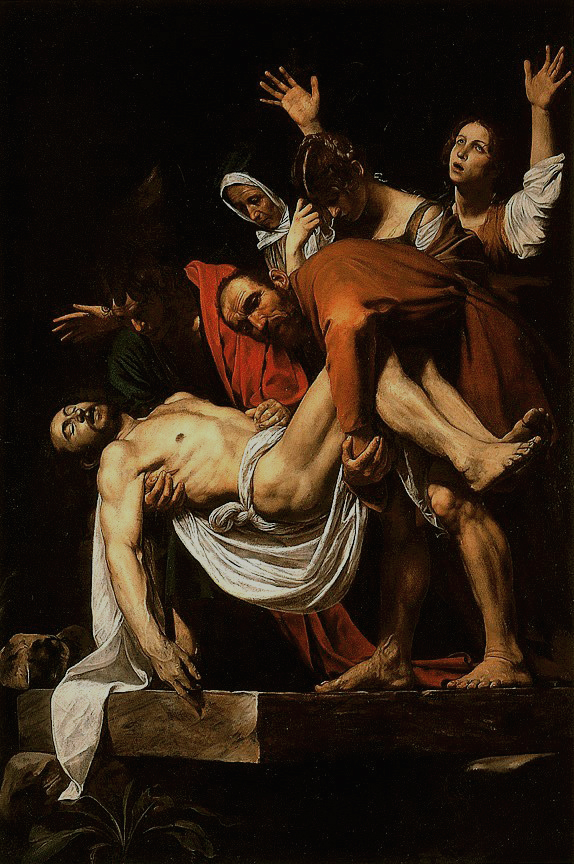 After the crucifixion, some on Christ’s followers (Nicodemus, Joseph of Arimathea, Mary Magdalene) along with his Mother, remove Christ’s body from the cross and place it in the tomb.

The Darkness (and the Light)

One of the first things you might notice about Caravaggio’s style, and we see it here in his painting of The Entombment, is the darkness. There’s actually a word for it: tenebroso, which means dark style. Caravaggio painted this scene as though it was happening in the black of night with almost a spot-light effect on the figures (doesn’t it look like a dark stage that has been illuminated with a spotlight?).

There are several things that are important about this: There is no background—only darkness. No architecture, no landscape, and so as a result, we focus on the figures who are all located in the foreground of the painting. The spotlight effect of the lighting is very dramatic, and so we have very stark contrasts of light and dark. In other words, where modeling isusually a slow movement from light to dark, here we have very dark shadows right next to areas of bright illumination. The effect is very dramatic.

Everything is located very much in the foreground of the painting, very close to us in fact. Look at Christ’s body—its so close we feel like we can touch it. And look at the ledge of the tomb, it is foreshortened and so it juts out into our space. And look at the elbow of the figure in orange carrying Christ’s legs—it is foreshortened, too, and so it pops into our space. One of the main characteristics of Baroque art is the breakdown of the barrier between our space and the space of thepainting, so we feel like we’re really part of it. Baroque artists use foreshortening a lot.

Baroque artists were interested in movement. Here we see the moment when Christ is being lowered into his tomb. It’s a process happening before our eyes, so once again, we have a caught moment in time. We see that the figures form a diagonal line—another very common feature of Baroque art. In the High Renaissance, we saw compositions in the shape of a pyramid—a very stable shape. Here in Baroque art we see diagonals, or sometimes interlocking diagonals in the shape of an X.

Caravaggio organized the composition so that it looks like the body of Christ is being lowered right into our space, as though we were standing in the tomb. Remember: one of the most important goals of Baroque art is to involve the viewer.

Baroque art tends to be very real—not only do the figures look “regular,” but the artist is giving us a very real sense of this moment. The body of Christ looks truly dead, the figures struggle to hold the dead weight of his body and ease him down gently into his tomb. 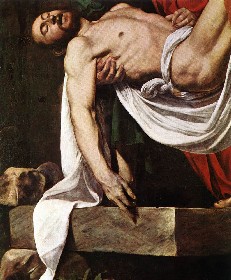 Figure 2. Details of the Deposition

The figures are all very ordinary looking, they are not idealized at all, like the figures of the High Renaissance. Look at the figure holding Christ’s legs. He almost looks like a homeless person. Look at his feet and legs—they are so ordinary looking—you can almost imagine the bottom of his feet being dirty. Even Christ looks rather like an ordinary man. They are figures we can relate to more —unlike the perfect figures of the High Renaissance.

One of my favorite things about this painting is the figure who carries Christ’s shoulders. He has his arm under Christ’s torso and his fingers, as they reached around Christ, slipped into the wound that he received when he was on the cross (Christ was stabbed by a Roman soldier in the ribs). Ewwww! Ick! You are probably saying to yourself. And that is the whole idea! Baroque art wants to get to you in your body—so you really feel it, and relate to it. When you know something in your mind it is one thing, but when you experience it with your body it is really different. Baroque art wants you to have an experience that’s located in your body—unlike the High Renaissance, which appealed to the mind.