Copley’s Watson and the Shark 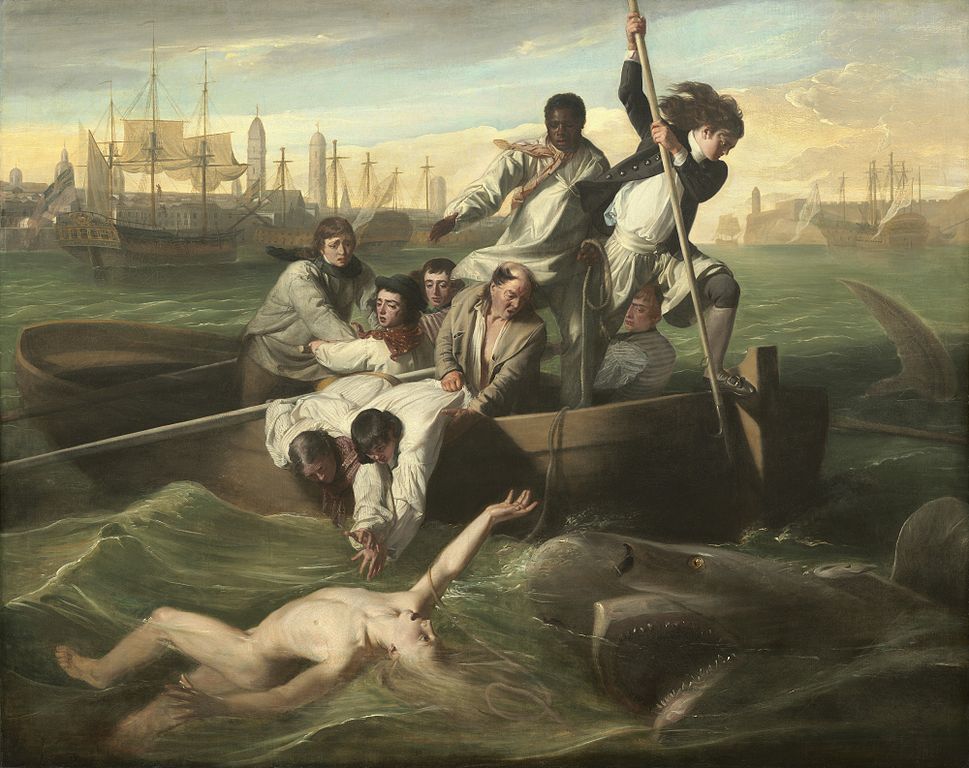 Eventually Copley found America’s art market wanting and its political climate treacherous; after positive reception overseas, he abandoned colonial life and, after studying art in Italy, left for London in 1774, never to return to his native land. His reasons were ultimately professional, political, as well as personal: his own father-in-law, a merchant for London’s East India Company, owned some of the tea shipments tossed into the harbor by the Sons of Liberty during the 1773 Boston Tea Party. Copley by no means should be labeled a Tory, however, believing that both Britain and America would emerge from the war prosperous empires redeemed through divine providence. His efforts to honor the wishes of both British and American patrons resulted in strain and criticism, with Copley in time losing the support of his colonial peers.

An example of Copley’s work after his move to England, Watson and the Shark (figure 1) is all at once a group portrait, a portrait of the patron (London merchant Brook Watson), as well as a snapshot of a real-life event. The painting depicts Watson’s trauma at age fourteen of being a victim of a shark attack off Havana, Cuba, an experience that cost the former cabin boy his leg. Copley portrays the third—and ultimately successful—rescue attempt by nearby sailors, glorifying it as a story of salvation and spiritual rebirth. Again we see Copley striving to prove his talent: he renders the choppy sea somewhat translucent to show the viewer Watson’s nude and well-muscled body, a clear testimonial to Copley’s study of the classical statuary of ancient Greece and Rome. The underlying messages are lofty ones as well, with Copley perhaps referencing both Christ’s Resurrection as well as the renewal of the British Empire in the aftermath of the American Revolution, in the visual image of Watson emerging from the watery depths. Watson and the Shark solidified Copley’s career in Britain and ensured his election to the Royal Academy in 1779 after its exhibition. As Watson was a British Tory, however, Copley’s heroicized treatment of his patron angered many American critics and cost the artist some of his esteem back home.

Copley’s relocation to Britain leaves us with some lingering questions: Can we even call Copley an American artist? With his painting style and cultural upbringing so closely mimicking the British standard, and in light of his move abroad, what—if anything—is truly American about his work? These are questions that may never be answered, but they open the door for understanding some of the complexities that characterized early American life.