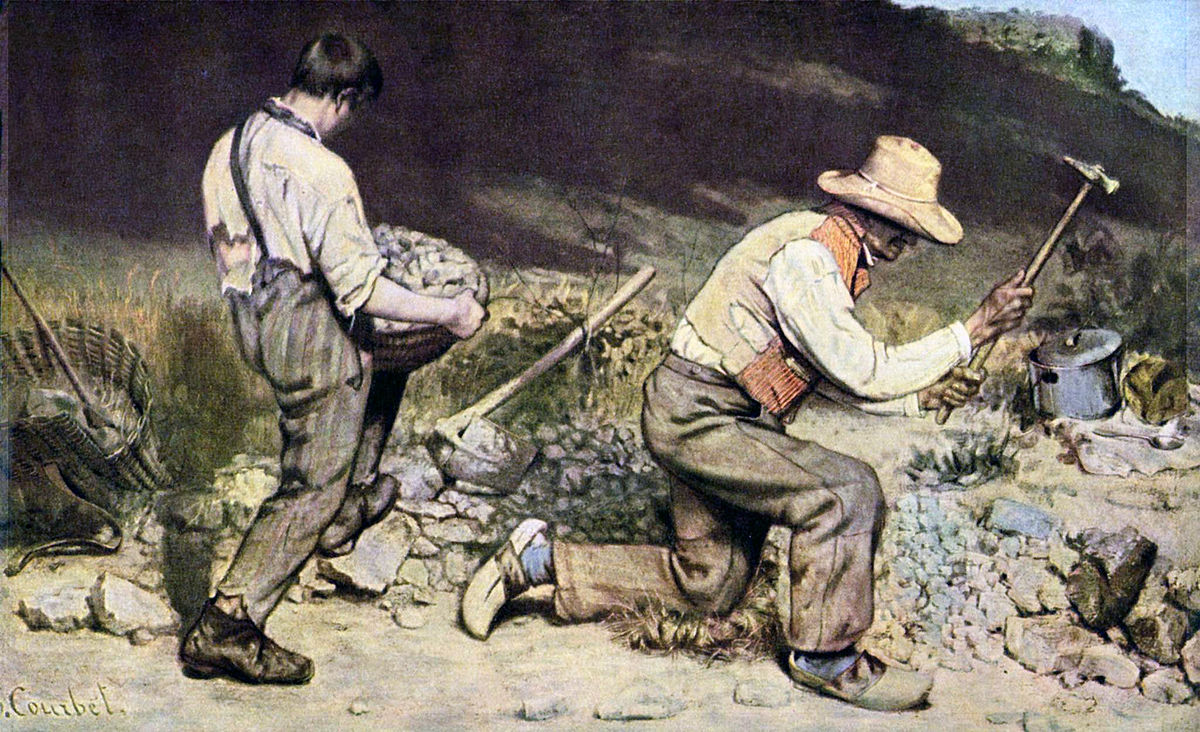 If we look closely at Courbet’s painting The Stone Breakers of 1849 (painted only one year after Karl Marx and Friedrich Engels wrote their influential pamphlet, The Communist Manifesto) the artist’sconcern for the plight of the poor is evident. Here, two figures labor to break and remove stone from a road that is being built. In our age ofpowerful jackhammers and bulldozers, such work is reserved as punishment for chain-gangs.

Unlike Millet (figure 2), who was known for depicting idealized, hale and hearty rural folk, Courbet depicts figures who wear ripped and tattered clothing. None of Millet’s mythologized farm workers appear here. Courbet wants to show what is “real,” and so he has depicted a man that seems far too old and a boy that seems still too young for such back-breaking labors. 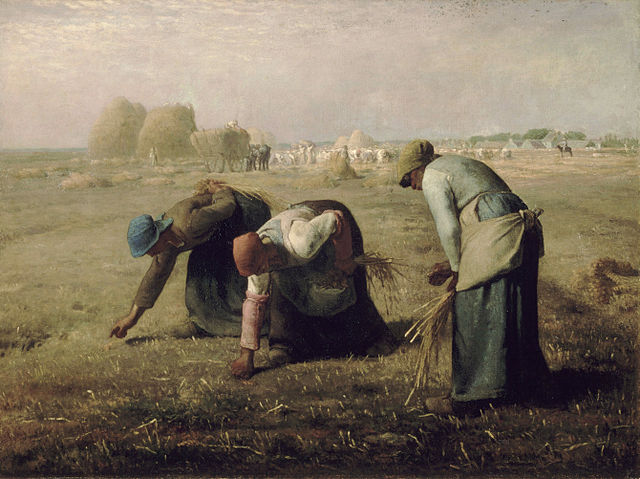 But this is not meant to be heroic: it is meant to be an accurate account of the abuse and deprivation that was a common feature of mid-century French rural life. And as with so many great works of art, there is a close affiliation between the narrative (story)and the formal choices made by the painter, meaning elements such as brushwork, composition, line, and color.

The two stone breakers in Courbet’s painting are set against a low hill of the sort common in the rural French town of Ornan, where the artist had been raised and continued to spend a much of his time. The hill reaches to the top of the canvas everywhere but the upper right corner, where a tiny patch of bright blue sky appears. The effect is to isolate these laborers, and to suggest that they are physically and socio-economically trapped by their work.

Like the stones themselves, Courbet’s brushwork is rough—more so than might be expected during the mid-nineteenth century. This suggests that the way the artist painted his canvas was in part a conscious rejection of the highly polished, refined Neoclassicist style that still dominatedFrench art in 1848.

Perhaps most characteristic of Courbet’s style is his refusal to focus on the parts of the image that would usually receive the most attention. Traditionally, an artist would spent the most time on the hands, faces, and foregrounds. Not Courbet. If you look carefully, you will notice that he attempts to be even-handed, attending to faces and rock equally. So what, then, is Courbet’s Realism?