It would be easy to characterize Ingres as a consistent defender of the Neo-Classical style from his time in David’s studio into the middle of the 19th century. Remember that the Apotheosis of Homer dates to 1827. But the truth is more interesting than that.

Ingres actually returned to Neo-Classicism after having rejected the lessons of his teacher, David, and after having laid the foundation for the emotive expressiveness of Romanticism, the new style of Gericault and the young Delacroix that Ingres would eventually defend against. Ingres’ early Romantic tendencies can be seen most famously in his painting, La Grande Odalisque of 1814. 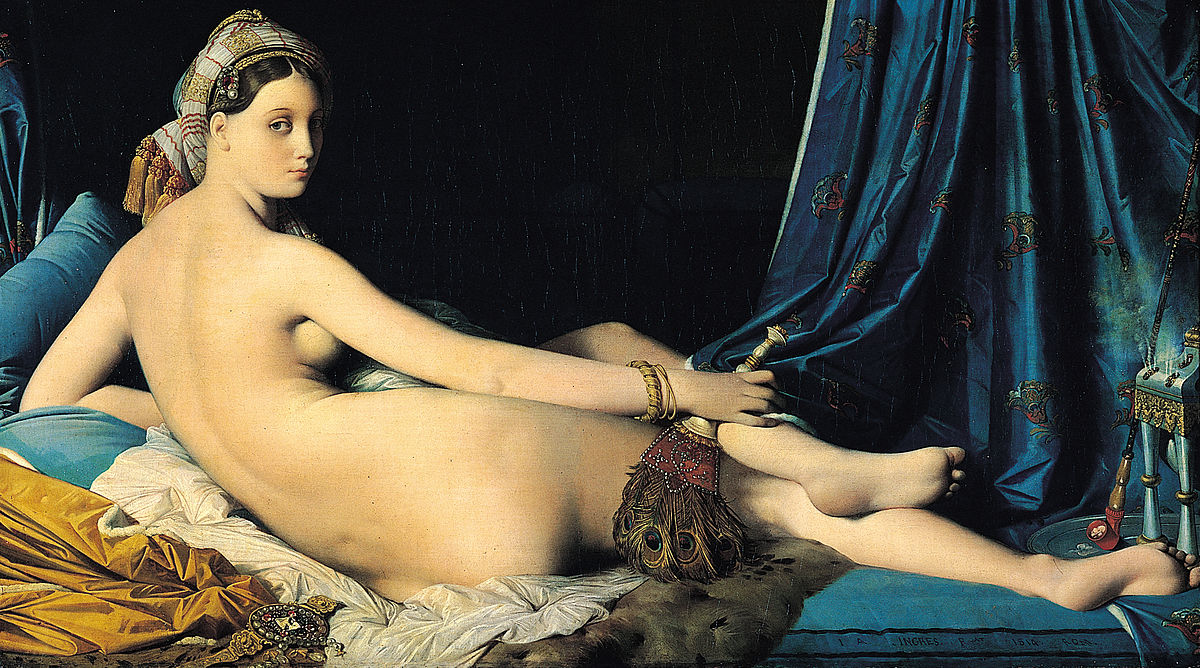 Here a languid nude is set in a sumptuous interior. At first glance this nude seems to follow in the tradition of the Great Venetian masters, see for instance, Titian’s Venus of Urbino of 1538. But upon closer examination, it becomes clear that this is no classical setting.

Instead, Ingres has created a cool aloof eroticism accentuated by its exotic context. The peacock fan, the turban, the enormous pearls, the hookah (a pipe for hashish or perhaps opium), and of course, the title of the painting, all refer us to the French conception of the Orient. Careful—the word “Orient” does not refer here to the Far East so much as the Near East or even North Africa.

In the mind of an early 19th century French male viewer, the sort of person for whom this image was made, the odalisque would have conjured up not just a harem slave, itself a misconception, but a set of fears and desires linked to the long history of aggression between Christian Europe and Islamic Asia. Indeed, Ingres’ porcelain sexuality is made acceptable even to an increasingly prudish French culture because of the subject’s distance.

Where, for instance, the Renaissance painter Titan had veiled his eroticism in myth, Ingres covered his object of desire in a misty exoticism. Some art historians have suggested that colonial politics also played a role. France was at this time expanding its African and Near Eastern possessions, often brutally. Might the myth of the barbarian have served the French who could then claim a moral imperative? By the way, has anyone noticed anything “wrong” with the figure’s anatomy?