When Art Intersects With Life

Many people associate performance art with highly publicized controversies over government funding of the arts, censorship, and standards of public decency. Indeed, at its worst, performance art can seem gratuitous, boring or just plain weird. But, at its best, it taps into our most basic shared instincts: our physical and psychological needs for food, shelter, sex, and human interaction; our individual fears and self-consciousness; our concerns about life, the future, and the world we live in. It often forces us to think about issues in a way that can be disturbing and uncomfortable, but it can also make us laugh by calling attention to the absurdities in life and the idiosyncrasies of human behavior. 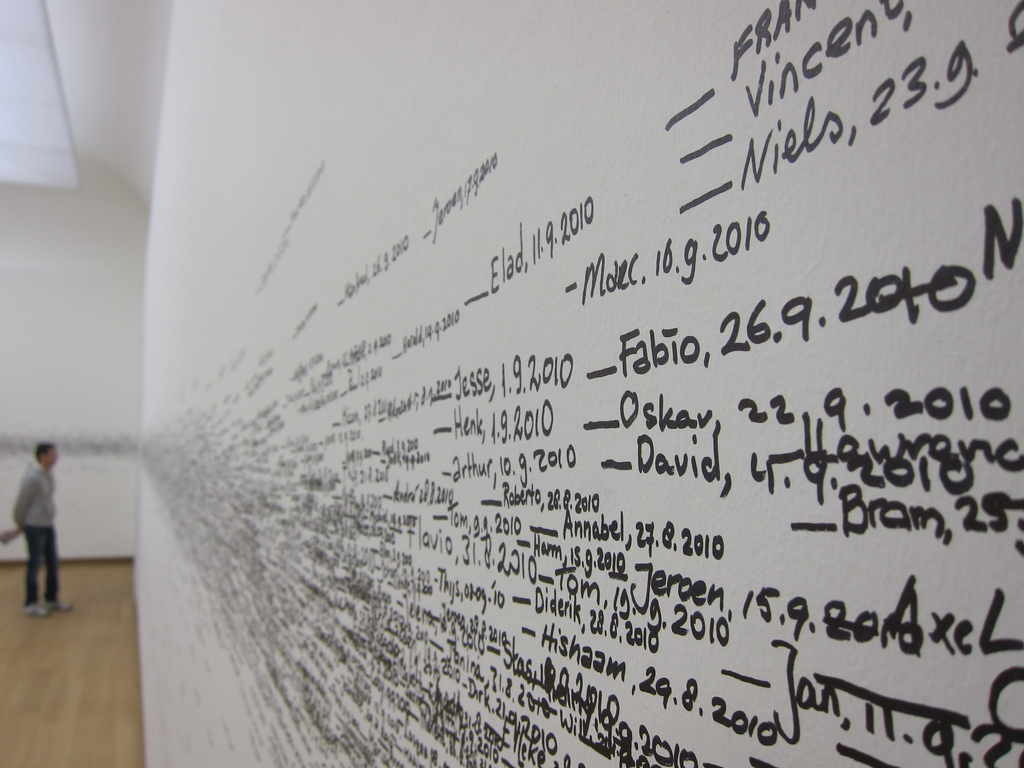 Performance art differs from traditional theater in its rejection of a clear narrative, use of random or chance-based structures, and direct appeal to the audience. The art historian RoseLee Goldberg writes:

Historically, performance art has been a medium that challenges and violates borders between disciplines and genders, between private and public, and between everyday life and art, and that follows no rules.[1]

Although the term encompasses a broad range of artistic practices that involve bodily experience and live action, its radical connotations derive from this challenge to conventional social mores and artistic values of the past.

While performance art is a relatively new area of art history, it has roots in experimental art of the late 19th and early 20th centuries. Echoing utopian ideas of the period’s avant-garde, these earliest examples found influences in theatrical and music performance, art, poetry, burlesque and other popular entertainment. Modern artists used live events to promote extremist beliefs, often through deliberate provocation and attempts to offend bourgeois tastes or expectations. In Italy, the anarchist group of Futurist artists insulted and hurled profanity at their middle-class audiences in hopes of inciting political action.

Following World War II, performance emerged as a useful way for artists to explore philosophical and psychological questions about human existence. For this generation, who had witnessed destruction caused by the Holocaust and atomic bomb, the body offered a powerful medium to communicate shared physical and emotional experience. Whereas painting and sculpture relied on expressive form and content to convey meaning, performance art forced viewers to engage with a real person who could feel cold and hunger, fear and pain, excitement and embarrassment—just like them.

Some artists, inspired largely by Abstract Expressionism, used performance to emphasize the body’s role in artistic production. Working before a live audience, Kazuo Shiraga of the Japanese Gutai Group made sculpture by crawling through a pile of mud. Georges Mathieu staged similar performances in Paris where he violently threw paint at his canvas. These performative approaches to making art built on philosophical interpretations of Abstract Expressionism, which held the gestural markings of action painters as visible evidence of the artist’s own existence. Bolstered by Hans Namuth’s photographs of Jackson Pollock in his studio, moving dance-like around a canvas on the floor, artists like Shiraga and Mathieu began to see the artist’s creative act as equally important, if not more so, to the artwork produced. In this light, Pollock’s distinctive drips, spills and splatters appeared as a mere remnant, a visible trace left over from the moment of creation.

Shifting attention from the art object to the artist’s action further suggested that art existed in real space and real time. In New York, visual artists combined their interest in action painting with ideas of the avant-garde composer John Cage to blur the line between art and life. Cage employed chance procedures to create musical compositions such as 4′33″. In this (in)famous piece, Cage used the time frame specified in the title to bracket ambient noises that occurred randomly during the performance. By effectively calling attention to the hum of fluorescent lights, people moving in their seats, coughs, whispers, and other ordinary sounds, Cage transformed them into a unique musical composition.

The Private Made Political

Drawing on these influences, new artistic formats emerged in the late 1950s. Environments and Happenings physically placed viewers in commonplace surroundings, often forcing them to participate in a series of loosely structured actions. Fluxus artists, poets, and musicians likewise challenged viewers by presenting the most mundane events—brushing teeth, making a salad, exiting the theater—as forms of art. A well-known example is the “bed-in” that Fluxus artist Yoko Ono staged in 1969 in Amsterdam with her husband John Lennon. Typical of much performance art, Ono and Lennon made ordinary human activity a public spectacle, which demanded personal interaction and raised popular awareness of their pacifist beliefs.

In the politicized environment of the 1960s, many artists employed performance to address emerging social concerns. For feminist artists in particular, using their body in live performance proved effective in challenging historical representations of women, made mostly by male artists for male patrons. In keeping with past tradition, artists such as Carolee Schneemann, Hannah Wilke and Valie Export displayed their nude bodies for the viewer’s gaze; but, they resisted the idealized notion of women as passive objects of beauty and desire. Through their words and actions, they confronted their audiences and raised issues about the relationship of female experience to cultural beliefs and institutions, physical appearance, and bodily functions including menstruation and childbearing. Their ground-breaking work paved the way for male and female artists in the 1980s and 1990s, who similarly used body and performance art to explore issues of gender, race and sexual identity.

Throughout the mid-twentieth century, performance has been closely tied to the search for alternatives to established art forms, which many artists felt had become fetishized as objects of economic and cultural value. Because performance art emphasized the artist’s action and the viewer’s experience in real space and time, it rarely yielded a final object to be sold, collected, or exhibited. Artists of the 1960s and 1970s also experimented with other “dematerialized” formats including Earthworks and Conceptual Art that resisted commodification and traditional modes of museum display. The simultaneous rise of photography and video, however, offered artists a viable way to document and widely distribute this new work.

Performance art’s acceptance into the mainstream over the past 30 years has led to new trends in its practice and understanding. Ironically, the need to position performance within art’s history has led museums and scholars to focus heavily on photographs and videos that were intended only as documents of live events. In this context, such archival materials assume the art status of the original performance. This practice runs counter to the goal of many artists, who first turned to performance as an alternative to object-based forms of art. Alternatively, some artists and institutions now stage re-enactments of earlier performances in order to recapture the experience of a live event. In a 2010 retrospective exhibition at New York’s Museum of Modern Art, for example, performers in the galleries staged live reenactments of works by the pioneering performance artist Marina Abramovic, alongside photographs and video documentation of the original performances.

Don’t Try This At Home

New strategies, variously described as situations, relational aesthetics, and interventionist art, have recently begun to appear. Interested in the social role of the artist, Rirkrit Tiravanija stages performances that encourage interpersonal exchange and shared conversation among individuals who might not otherwise meet. His performances have included cooking traditional Thai dinners in museums for viewers to share, and relocating the entire contents of a gallery’s offices and storage rooms, including the director at his desk, into public areas used to exhibit art. Similar to performance art of the past, such approaches engage the viewer and encourage their active participation in artistic production; however, they also speak to a cultural shift toward interactive modes of communication and social exchange that characterize the twenty-first century.