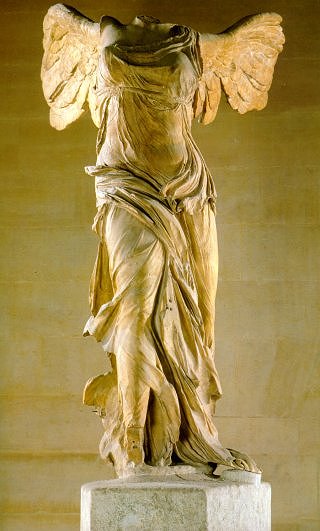 Prior to the late nineteenth century, the streets of this largely medieval city were the chaotic result of organic unplanned growth. Paris was a warren of tangled streets, some little more than narrow alleys that slowed travel, trade and troops, and could be easily blocked allowing revolutionaries to fortify entire sections of the city. It is upon these very barricades that Liberty, the personification of freedom (who the French call Marianne) stands. She holds the tri-color aloft. This is the banned flag of revolution and democracy. The wind spins her drapery around her hips alluding to classical statuary.

Note that the spiraling costume of the great Hellenistic (late ancient Greek) sculpture, the Nike (victory) of Samothrace on view in the Musée de Louvre was found after the Delacroix was created but is a useful reference nevertheless (see figure 1).

For what possible reason has Delacroix exposed Marianne’s breasts? The answer lies in the figure not being an actual person but rather the embodiment of an idea in a human figure. Marianne is, of course, democracy. Democracy was born in Ancient Greece as Delacroix reminds us by his reference to ancient sculpture and his use of partial nudity. But there is a second reference here. During France’s first revolution, the one that began in 1789, the newly created democratic state was sometimes depicted as an infant suckled by freedom, by Marianne, its mother.