In 1904, Picasso returned to Paris and rented a studio in an old, dilapidated building filled with artists and poets. Located at 13 Rue Ravignan, the building was dubbed the Bateau-Lavoir (or laundry barge) by poet-in-residence, Max Jacob. It is at this time that Picasso first came into contact with French painter Henri Matisse, as well as American ex-pat Gertrude Stein, who—along with her brother Leo—was one of the foremost patrons of modern art in Paris. 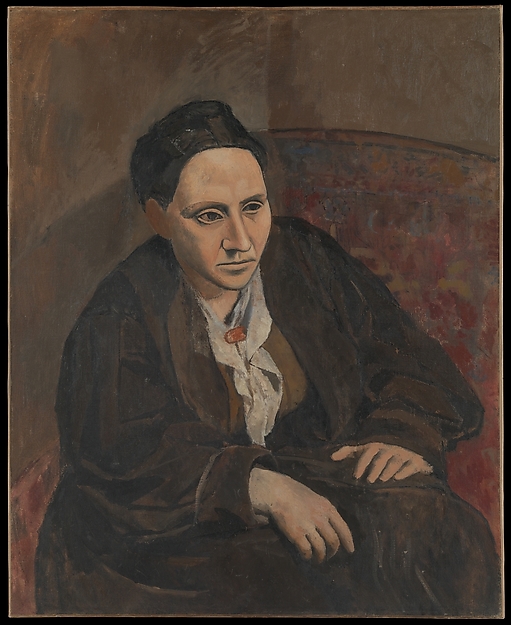 In 1905, at the same time that Leo Stein bought Matisse’s Bonheur de Vivre, Gertrude commissioned a portrait by Picasso. The related story goes like this: Stein sat for Picasso so many times (supposedly 90 sittings) that eventually he said that he could no longer see her face when he looked at her. He then wiped out the face just before a trip to Spain.

In the autumn of 1905 after his return to Paris, Picasso painted Stein’s mask-like face, which reflected his new interest in archaic Iberian sculpture that he had just seen in an exhibition at the Louvre. There is one more element to this anecdote: Stein’s friends often noted that the painting didn’t look like her. Picasso’s response was, “it will.” For her part, Stein said in later years that it was the only image of her that she thought was successful.