About 25 years after painting the ceiling of the Sistine Chapel and many years after the death of Pope Julius II, Michelangelo is asked to paint the wall behind the altar with a fresco of the Last Judgment by Pope Clement VII. 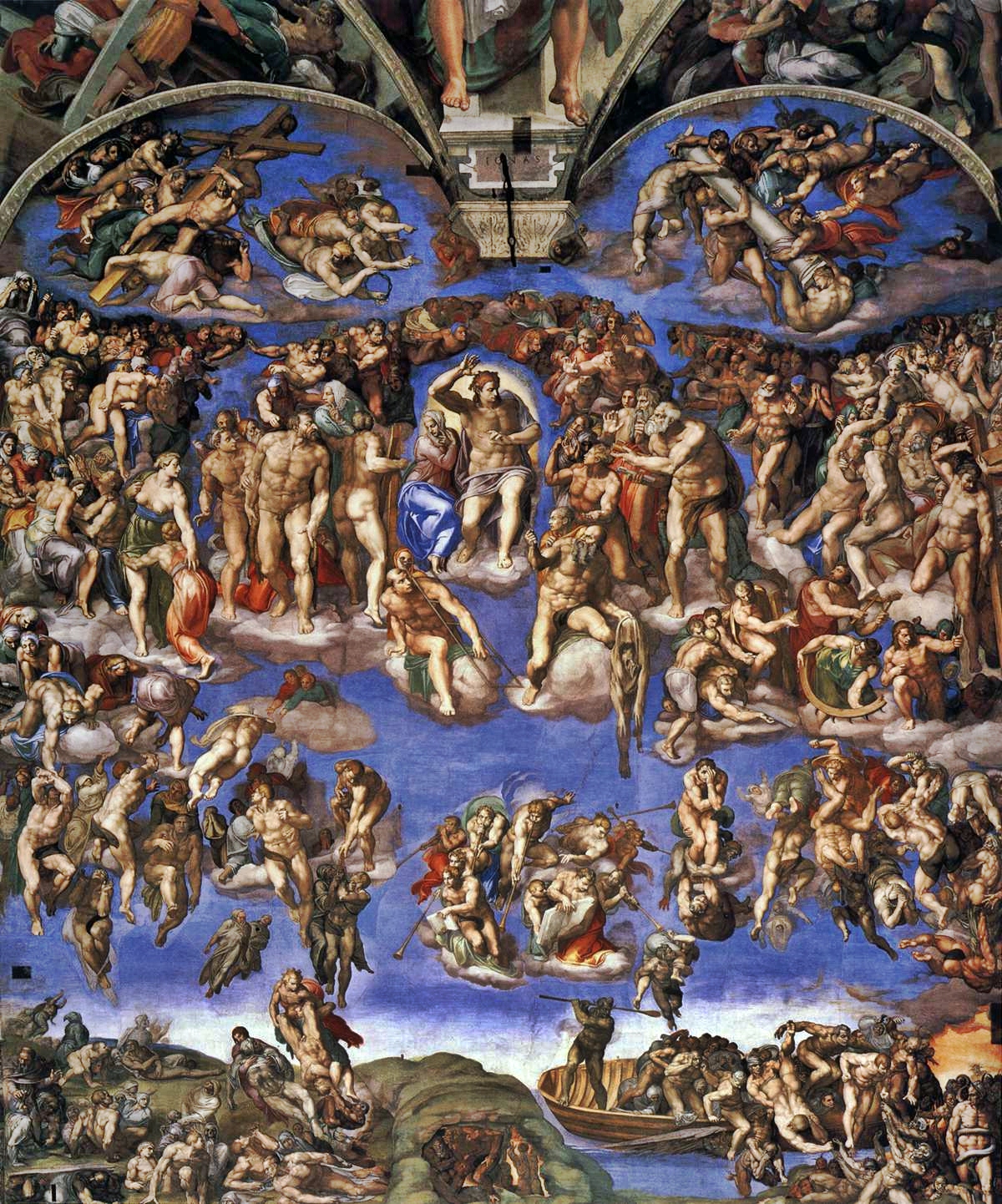 Michelangelo is not the same man he was when he painted the ceiling. His mood is more pessimistic, he is more devout and clearly concerned about the fate of his own soul. The times had changed as well. The Protestant Reformation was well under way, and the Church was beginning to turn its back on the Humanism of the High Renaissance. The Church responded to the attack by Luther by going on the offensive, bringing a powerful, energized Catholicism to the people. The subject of the Last Judgment, where we see the damned tortured in hell, needs to be seen against these historical developments.

The Last Judgment is a very old subject in art history represented by many artists. The subject is the Second Coming of Christ, where Christ returns to judge all of mankind.

Christ separates the blessed (those who will go to heaven), who he gathers on his right, from the damned (those who will go to hell), who he gathers on his left. In the ninth and tenth centuries, during the Middle Ages, this scene was often represented on the doorways of churches so that you had a frightening image of the Day of Judgment on your way in to church.

Here, Michelangelo shows us Christ in the center and below him to his (Christ’s) left are the damned who are being pulled down to hell and shipped to hell where they are tortured by demons.

Below Christ to his right (careful—not our right) are the blessed who rise from their graves and float up to heaven with the aid of angels.

On either side of Christ directly are important figures, like Eve, and also Saints, many of whom died particularly painful deaths. We can identify these different Saints by what they carry. Usually Saints carry the instruments of their martyrdom, or some other identifying attribute.

Saint Catherine carries a wheel because she was martyred on the spokes of a wheel (here she is from Michelangelo’s fresco). Saint Lawrence carries a grill, because he was burned to death, and Saint Sebastian carries arrows because his entire body was pierced by arrows.

Michelangelo said that these saints “sew the seeds of faith,” that is, by their example of faith—a faith so firm that they were willing to undergo physical torture and death—they provide an example for us 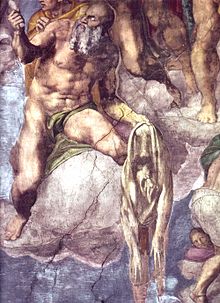 Michelangelo also included Saint Bartholomew, who was martyred by being skinned alive. He holds the knife in one hand, and in his other he holds his skin. When we look closely at the skin of St. Bartholomew we see that Michelangelo painted his self-portrait there which appears distorted in the sagging skin.

We know from Michelangelo’s poetry that at this point in his life (for the 16th century he was an old man) he was feeling more devout and concerned about the fate of his own soul. He placed his self-portrait hovering precariously over hell and midway, in a diagonal line, between Christ, and the famous image of the man who has just realized that he is being pulled down toward hell.