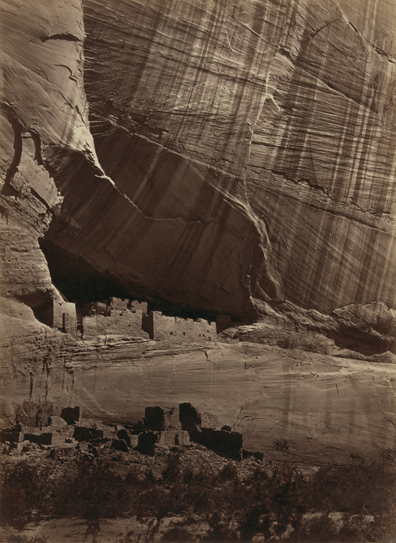 The impressive natural landscape of Timothy O’Sullivan’s photograph Ancient Ruins in the Canyon de Chelly (1873) immediately commands attention (figure 1). The yawning black hole in the center is emphasized by the dramatic striations in the rocks, the black and white contrast of the photograph making the layers of sediment far more obvious than they would be in reality. In fact, the drama of the surrounding landscape makes it possible to almost overlook the ancient ruins at the mouth of a black cave.

Although clearly a documentary image of the scene, the photograph also employs many of the artistic conventions of landscape painting. The narrowly focused composition does not allow the viewer’s eye to wander through the landscape. In fact, our vision in confined solely to the rock and the ruins, without the standard light source found in most landscape painting. However, light plays an obvious role in the play of light and dark on the rock walls. The ruins themselves, which suggest the passage of time, are so small as to emphasize the traditional Romantic interest in man’s insignificance when confronted with the immensity of nature.

The Realities of War

Timothy O’Sullivan began his photographic career as an apprentice in the studio of Mathew Brady. At the start of the Civil War, he became part of Brady’s team assigned to document the conflict, although O’Sullivan resigned after an argument with Brady over who was to receive credit for authorship of his photos. Many of O’Sullivan’s war images have a haunting quality, for example, A Harvest of Death (1863), which captures a misty landscape in Gettysburg, Pennsylvania littered with corpses. At a time when standard war images consisted of portraits of soldiers in uniform and camp life, O’Sullivan’s photograph is a stark reminder of the realities of the conflict. 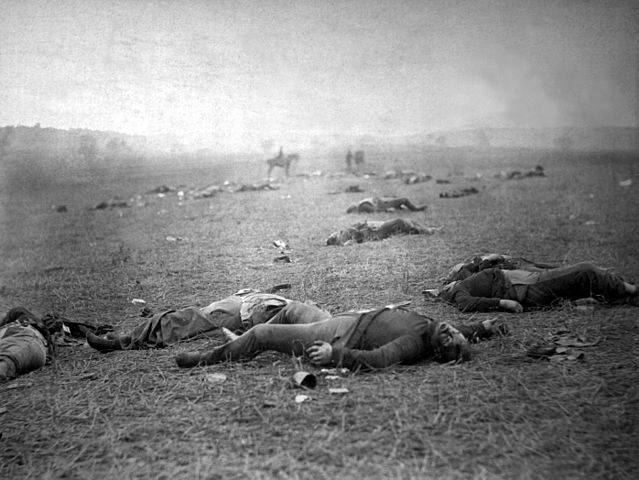 Figure 2. The Harvest of Death. Union dead on the battlefield at Gettysburg, Pennsylvania, photographed July 5–6, 1863

During the late 1860s and 70s O’Sullivan traveled west several times photographing as part of various geological survey teams. The difficulties of these trips must have been huge, carrying men and equipment through the wilderness in wagons and small boats. O’Sullivan himself nearly drowned on an early expedition when he was thrown from a boat and carried down stream by rapids before finally making his way to shore. Managing his personal equipment must have also been a challenge. Photographs at the time were exposed on large glass plates, and understandably, many of O’Sullivan’s images simply didn’t make it home.

In 1873 O’Sullivan himself led a group to explore the rock formations and long abandoned archaeological remains found in Arizona around the Canyon de Chelly. The ancient pueblos in the photograph were built by the Anasazi or Navajo for “ancient ones.” Although O’Sullivan was one of the first to capture this impressive scene, many others have followed in his footsteps, including the legendary twentieth-century landscape photographer Ansel Adams. The Canyon de Chelly became a National Monument in 1931 and is today jointly managed by the National Park Service and the Navajo Nation.