Titian, Madonna of the Pesaro Family

This altarpiece was commissioned by Jacopo Pesaro for the family chapel in the Church of Santa Maria Gloriosa dei Frari in Venice. The painting shows the Virgin and Child with Saint Francis (on the right looking up to the Christ Child), St. Anthony (on the far right), St. Peter (in the center looking down at Jacopo Pesaro, the donor, in the lower left), a soldier holding a banner (perhaps St. Michael) and a Turk in a turban. This subject—the virgin and child with saints within a unified space—is called a “sacra conversazione.” This is different from medieval altarpieces that showed the saints in separate panels from the Madonna and Child, usually in elaborately gilded frames (for example, this painting by Paolo Veneziano). Saints Francis and Anthony make sense here, since Santa Maria dei Gloriosa dei Frari is a Franciscan Church.

Pesaro was a Venetian nobleman and commander of the Pope’s naval forces in the successful recapturing of the island of Santa Maura (a Venetian territory) from the Turks in August 1502.

An earlier painting by Titian (perhaps Titian’s earliest surviving work) commissioned by Pesaro just after the naval victory, shows a similar subject. Here, Pesaro is being presented to Saint Peter by Pope Alexander VI (the same pope whose insignia appears in the Madonna of the Pesaro Family. 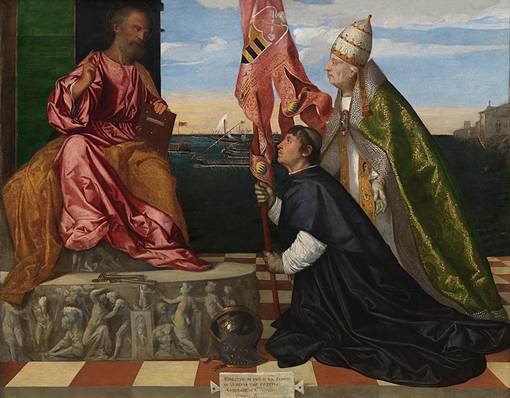