The feathered serpent deity that appears in carvings at Tula and also in much later buildings and mythology in the Aztec Empire.

A scholar that utilizes Aztec accounts of Toltec culture to piece together the history of the Toltec people.

Gigantic stone statues of Toltec warriors that only appear at the sites of Tula, Chichén Itzá, and Potrero Nuevo.

The later Aztec culture saw the Toltecs as their intellectual and cultural predecessors, and described Toltec culture emanating from Tōllān [ˈtoːlːaːn] (Nahuatl for Tula) as the epitome of civilization. Indeed, in the Nahuatl language the word “Tōltēcatl” [toːlˈteːkat͡] (singular) or “Tōltēcah” [toːlˈteːkaʔ] (plural) came to take on the meaning “artisan.” The Aztec oral and pictographic tradition also described the history of the Toltec Empire, giving lists of rulers and their exploits.

Among modern scholars it is a matter of debate whether the Aztec narratives of Toltec history should be given credence as descriptions of actual historical events. While all scholars acknowledge that there is a large mythological part of the narrative, some maintain that by using a critical comparative method some level of historicity can be salvaged from the sources. Others maintain that continued analysis of the narratives as sources of actual history is futile and hinders access to actual knowledge of the culture.

Another controversy relating to the Toltecs remains how best to understand the reasons behind the perceived similarities in architecture and iconography between the archaeological site of Tula and the Mayan site of Chichén Itzá. No consensus has yet emerged about the degree or direction of influence between these two sites. 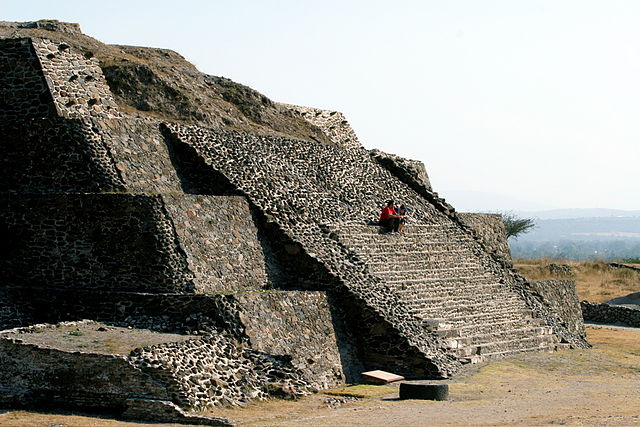 Toltec pyramid at Tula, Hidalgo. Similarities to the pyramid at Chichén Itzá can be seen, including the sloped shape and external steps.

The historicists believe that there is truth within the stories told by the Aztecs. Theories abound about the role the Toltecs actually played in Mesoamerica, from the central Mexican valleys all the way down to certain Maya city-states.

On the other side of the argument lie those who believe that the Aztec stories are clouded by myth and cannot be taken as accurate accounts of the Toltec civilization. Multiple theories place the Toltec and the site of Tula within a more general framework:

While the residents of the site of Tula, Hidalgo, remain a mysterious group, and their ethnic and social dynamics are obscure, they left behind substantial archeological records that modern scholars have attempted to parse through.

The city of Tula boasts 15-foot-tall warrior statues carved from stone. These same Atlantean figures, as they are called, also appear at the Mayan sites of Chichén Itzá and Potrero Nuevo.

Tula also boasts intricate carvings of eagles, jaguars, hummingbirds, and butterflies, all of which the Aztec Empire used prolifically. Furthermore, the site of Tula includes two ball courts for the religious rubber ball game that appears in many Mesoamerican civilizations. Along with these distinct relics, the Toltecs also built distinctive pyramids that mirror other sites, such as Chichén Itzá.