The massive expanse of Russia exhibits a variety of physical environments, such as tundras, steppes, mountains, and birch forests. Type D (continental) climates dominate most of the country and characterize large landmasses such as Eurasia and North America. Land in the center of a large continent, far from the moderating effects of oceans, tends to heat up rapidly in the summer and cool down rapidly in the winter. These areas are known for hot summers and cold, harsh winters. Northern Russia borders the Arctic Ocean, and frigid air masses from the Arctic swoop south across Russia each winter. Moreover, Russia’s northerly latitude means that it experiences a short growing season and has never been an agricultural superpower; the country usually has to import grain to feed its people. Mountain ranges to the south block summer rains and warm air masses that would otherwise come from South and Central Asia, thus creating deserts and steppes in southern Russia.

Most of Russia’s population live in the European part of the country on the Eastern European Plain, also known as the Western Russian Plain, or the Russian Plain, the most agriculturally productive land in Russia. The eastern edge of the plain is marked by the Ural Mountains, a low-lying mountain chain (about 6,000 feet) that crosses Russia from the Arctic Ocean to Kazakhstan. The mountains contain deposits of coal, iron ore, and precious and semiprecious stones and are considered the boundary between Europe and Asia. To the south of the Russian Plain is another mountain range, the Caucasus Mountains, which bridges the gap between the Caspian and Black Seas. East of the Urals are the West Siberian Plain, the Central Siberian Plateau, the Yakutsk Basin, the Eastern Highlands, and the Central Asian Ranges. Russia has rich natural resources, such as petroleum, natural gas, and forest products. 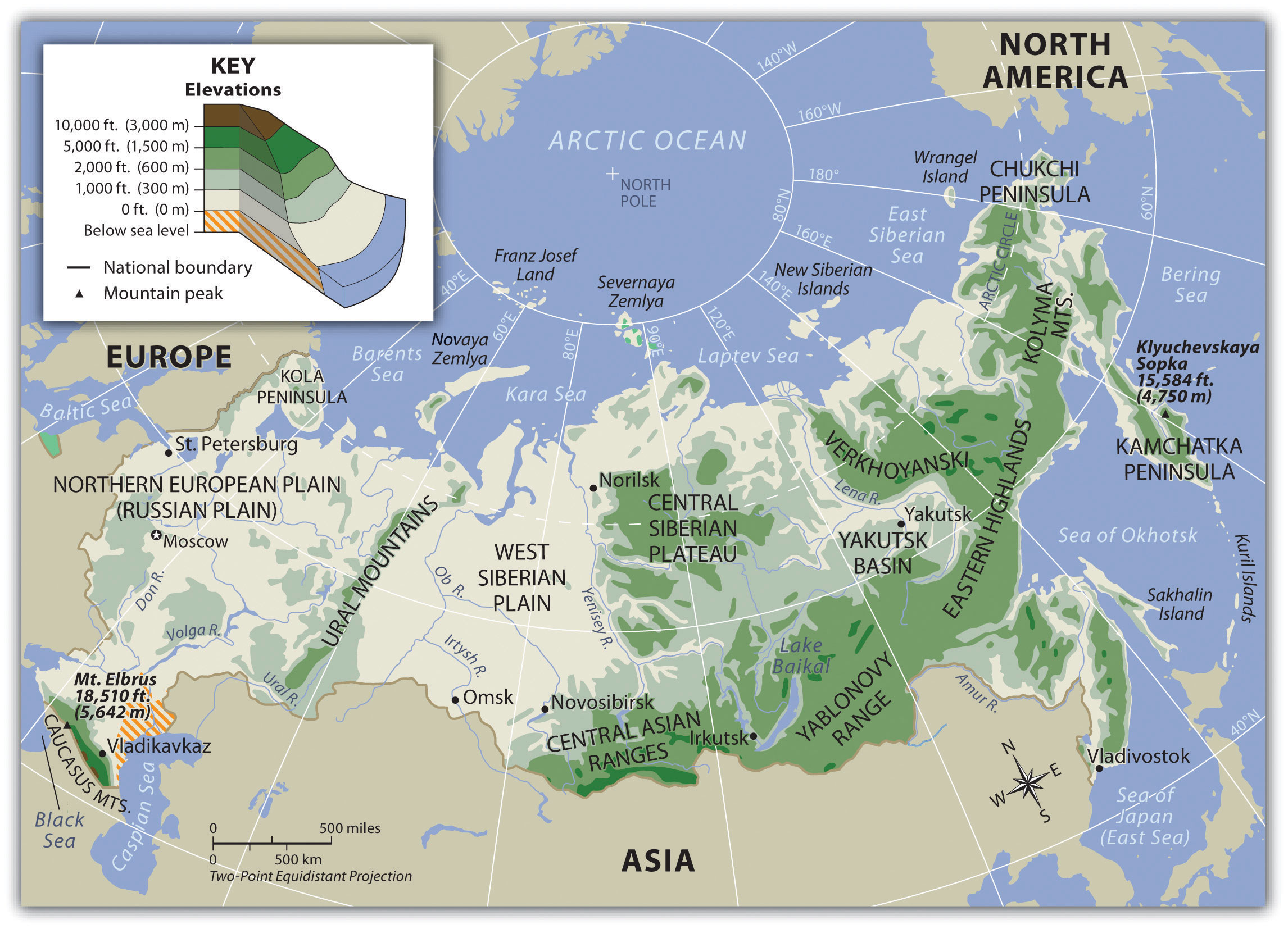 Expansion of the Empire

The territory that makes up the Russian Federation was gradually conquered by the Russian Empire as the country expanded from its political core around Moscow/St. Petersburg during the sixteenth through the nineteenth centuries. By the end of the eighteenth century, Czarina Catherine the Great had expanded Russia to include the area that is now Ukraine (the north side of the Black Sea), the northern Caucasus Mountains, and Alaska (which Russia later sold to the United States). During the next century, the Russian Empire expanded eastward into Central Asia (what is now Kazakhstan, Uzbekistan, and the other Central Asian republics), southward into the rest of the Caucasus region, and westward into Poland and Finland. In the twentieth century, when the Russian Empire disintegrated and was replaced by the Soviet Union (the Union of Soviet Socialist Republics or USSR), the central government continued to expand and strengthen its control of the vast area from Eastern Europe to the Pacific Ocean.

Both the Russian Empire and the Soviet Union were imperial powers. In other words, these governments ruled a large variety of ethnic groups in distant places: people who spoke many languages, people who worshiped different gods in different ways, people who had various skin and hair colors, and people who did not consider themselves to be Russian. Although the British and some other European powers had an arguably more difficult task of ruling empires that were widely scattered around the world, Russia had the largest empire in terms of territory. Ruling this diverse, immense empire was an incredible challenge.

The czars ruled this empire with Russification and the sword. Russification refers to the attempt to minimize cultural differences and turn all Russian subjects into Russians, or at least to make them as Russian as possible. As they were all subject to the Russian czars, people were taught the Russian language and were encouraged to convert to Russian Orthodoxy. Russification was not very successful, and the farther people were from Moscow the less likely they were to be Russified. When the Soviets took over the Russian Empire, millions of Muslims still lived in Central Asia, on the Crimean peninsula of southern Ukraine, in the Caucasus Mountains, and elsewhere. 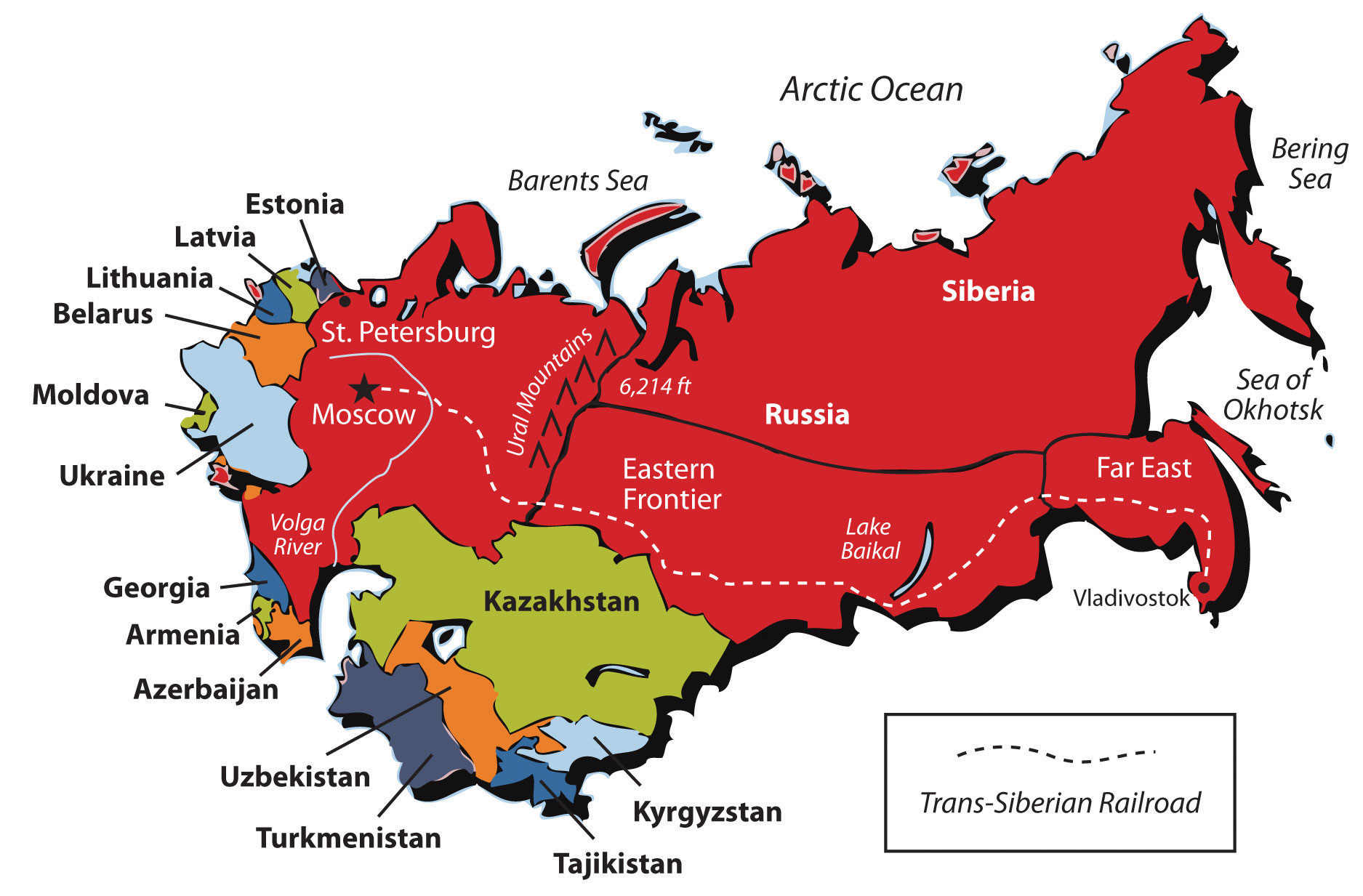 The creation of these republics strengthened certain ethnic/national identities and weakened others. There had not been a fully developed Uzbek national identity before the formation of the Uzbek SSR. The same was true for the Kazakh SSR, the Turkmen SSR, and others. Although people in a certain area might have spoken the same language, they did not think of themselves as belonging to a nation of fellow Uzbeks, Kazakhs, or Turkmen until they were put into one by the Soviet rulers. In 1991, when the Soviet Union collapsed, these Soviet Socialist Republics were able to declare their independence from Russia, and the national identities fostered during the Soviet era came to fruition.

At the same time that the Soviets were organizing minority ethnic groups into republics, they were also sending ethnic Russians to live in non-Russian parts of the Soviet Union. Some were sent by force—such as Russians who were sent to prison camps in Siberia and stayed in the area after they were eventually freed. Other Russians were sent around the empire to work in factories, power plants, and other industries, or they were sent to help administer the government. By sending Russians to the far reaches of the Soviet Union, the Russian government hoped to consolidate its control over the various republics and to dilute the strength of the minority ethnicities. This policy also had unintended consequences: when the Soviet Union collapsed after 1991 and the various republics became independent countries, they each had to deal with sizable Russian minorities. For example, at the time of its independence, nearly as many ethnic Russians lived in Kazakhstan (38 percent) as ethnic Kazakhs (40 percent). In the twenty years since then, many Russians moved to Russia from the former Soviet republics. In 2010, Kazakhstan’s population was only about 24 percent ethnic Russian1. 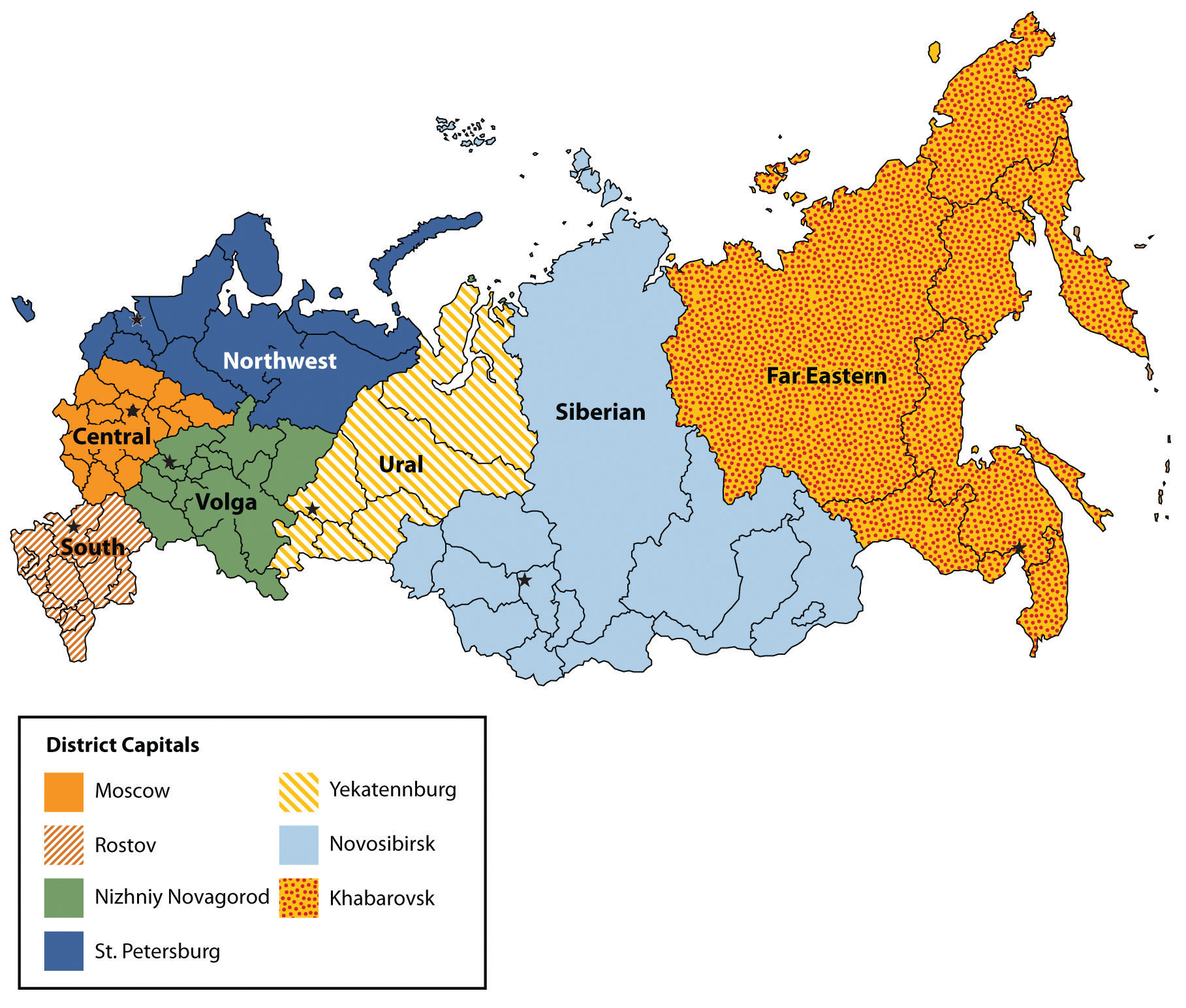 The Russian federation was created with eighty-three federal subjects: two autonomous federal cities; forty-six provinces (oblasts) and nine territories (krais) that function in the same way and are the most common type of federal unit; twenty-one republics; four autonomous districts (okrugs); and one autonomous oblast. Moscow and St. Petersburg are the two federal cities that function as their own units. The oblasts and krais each have a governor appointed by the central government and a locally elected legislature. The governorship was an elected position in the 1990s, but President Vladimir Putin changed the structure to strengthen the power of the central state. The republics, designed to be home to certain ethnic minorities, are allowed to have their own constitutions and governments and to select an official language that will be used besides Russian, but they are not considered independent countries with the right to secession. The autonomous districts were also formed for ethnic minorities and are administered either by the central state or by the province or territory in which they are located. The only autonomous oblast was created in the 1930s to be a home for Jews in the Russian Far East, but only about 1 percent of the population remains Jewish today.

Each region of the Russian republic has its own environmental issues. The core region surrounding Moscow, with all its industrial activity and large urban expanses, introduces sewage and chemicals to the country’s waterways, contributing to serious water pollution. The same water pollution is found east of the Ural Mountains—and in the waterways in that region—because of the industrial cities found there. Moscow and the ring of industrial cities surrounding it have seen a dramatic increase in automobile use since 1991, contributing to air pollution. Russia is blessed with abundant natural resources, but significant environmental damage has been the price of exploiting and extracting those resources. Massive oil spills have occurred in the taiga and tundra areas, where the lack of safety management has increased environmental damage during oil exploration and development. The taiga is the large expanse of evergreen or boreal forests in the north just south of the tundra in North America, Europe, and Asia. The taiga is most common in type D climates and is one of the largest biomes on earth. The taiga is the largest biome in Russia. Mining and smelting processes in Siberian cities have added to the region’s air and water pollution. These ecosystems are rather fragile and will take years to recover from such damage.

Water pollution from the rivers extends into the Black Sea, the Caspian Sea, and other bodies of water. Lake Baikal, described as the largest freshwater lake in the world, was at one time pristine, but pollutants have entered its waters from nearby industrial activity. Increased pollution in the Black and Caspian Seas, as well as overfishing, the lack of fishing regulations, and the lack of law enforcement, has resulted in the devastation of fish populations such as the caviar-producing sturgeon. The Arctic waters of the Barents Sea off the northern coast of Russia have been a dumping ground for nuclear waste products and expended nuclear reactors from naval vessels. The consequences of this nuclear pollution are not widely known or studied. Many additional aging nuclear reactors from the Soviet era dot the landscape, and they will need to be decommissioned at some point, adding to the nuclear waste issues. Various regions in Siberia were used for nuclear testing and are also contaminated with nuclear radiation.