Figure 4.12. The Statue of Liberty has long been a symbol of the American ideals that welcome immigrants to America. Wikimedia Commons – public domain.

Early immigration to America was dominated by people from the British Isles, resulting in an American population for whom speaking English and practicing Protestant Christianity was the norm. There were some regional exceptions to this, such as Catholicism in Maryland and the widespread speaking of German in Pennsylvania, but by and large English and Protestantism were standard in the American colonies. As migrants arrived in the United States from non-English-speaking countries, within a generation they learned English and assimilated into American society, giving rise to the idea of the United States as a cultural melting pot. People were drawn to the United States by the hope of economic opportunities; most immigrants were poor and came to the United States to make a living and improve their financial well-being. They viewed assimilation into mainstream society as a necessity for success. They believed in the American Dream—that through hard work, you could achieve upward mobility and financial success no matter your background. The dream came true for millions of Americans but remains out of reach for many who live in poverty.

As of 2010, the United States was home to approximately 310 million people and was the third-most populated country in the world after China and India. Among developed countries, the US population is one of the fastest growing, at about 1 percent each year. This is thanks to a fertility rate of about 2.1 that is higher than the 1.5 for that of most European countries, as well as a positive net migration rate (more people immigrating to the United States than emigrating from it). In terms of human well-being, life expectancy is more than seventy-eight years for men, and the average woman can expect to live more than eighty years. While this may seem high, especially when compared with a century ago, life expectancy in the United States is lower than in forty-nine other countries.

Although English has remained the dominant language, as a country of immigrants, the United States is home to people from all corners of the world and home to many cultural or ethnic minority groups. According to the 2010 census, the ethnic minority groups in the United States included 16.3 percent Hispanic (who can be of any race); 12.6 percent black or African American; 5.0 percent Asian and Pacific Islander; and 1.0 percent Native American (American Indians, Eskimos, and Aleuts) (US Census Bureau). An interesting trend is that Asians are growing faster than any other ethnic group in California, the nation’s largest state. The 2010 census reported that the Asian population in California had increased 31.5 percent since 2000 to a total of five million.

The US Hispanic Population

One of the most striking shifts in immigration patterns of the past few decades has been the dramatic increase in Hispanic/Latino immigrants to the United States. While there have long been Spanish speakers living in the United States (recall that Spain colonized Florida, Texas, and the Southwest before those regions became part of the United States), for most of American history the Hispanic minority had little impact outside of a few areas of the country. In 1970, Hispanics made up less than 5 percent of the US population, but by 2010, forty-eight million Hispanics made up about 16 percent of the population (Figure 4.13 “Hispanic Population in the United States and the US Sun Belt”). For the first time, Hispanics were the largest ethnic minority in the United States, surpassing blacks as the largest minority starting with the 2000 US census (12.5 percent Hispanic compared with 12.3 percent black). The US Hispanic population doubled between the 1990 and 2000 censuses. Between 2000 and 2006, Hispanic population growth accounted for about half the nation’s growth and grew about four times faster than the country’s population as a whole.

The growth of the US Hispanic population is a direct result of increased immigration from Latin America to the United States in the late twentieth and early twenty-first centuries (Hoefer, M., et. al., 2011) and the Hispanic population having higher fertility rates than the non-Hispanic US population (Archibold, R. C., 2011). 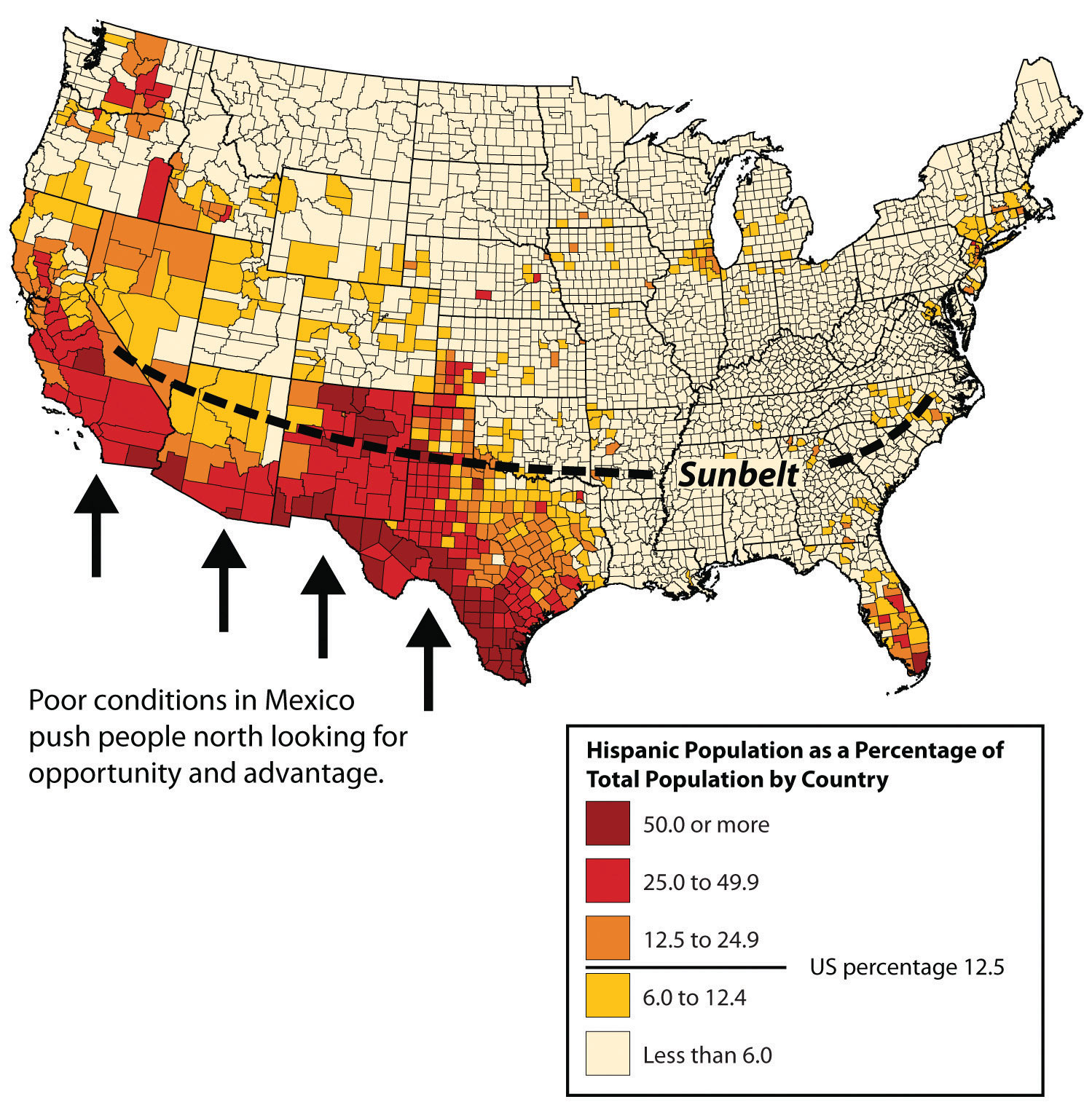 Figure 4.13 Hispanic Population in the United States and the US Sun Belt. Map courtesy of NationalAtlas.

Who are the Hispanics living in the United States? Most were born in the United States (60 percent), while the rest are immigrants. Two thirds are either from Mexico or of Mexican descent, while others hail from the US territory of Puerto Rico, Cuba, or the Dominican Republic. Note that all Puerto Ricans are US citizens and can move to and from the US mainland without any special documentation requirements. More Hispanics come from Central America than from South America. Hispanics work in all professions but are found in professions such as agriculture, construction, and food service at higher rates than the country’s non-Hispanic population. 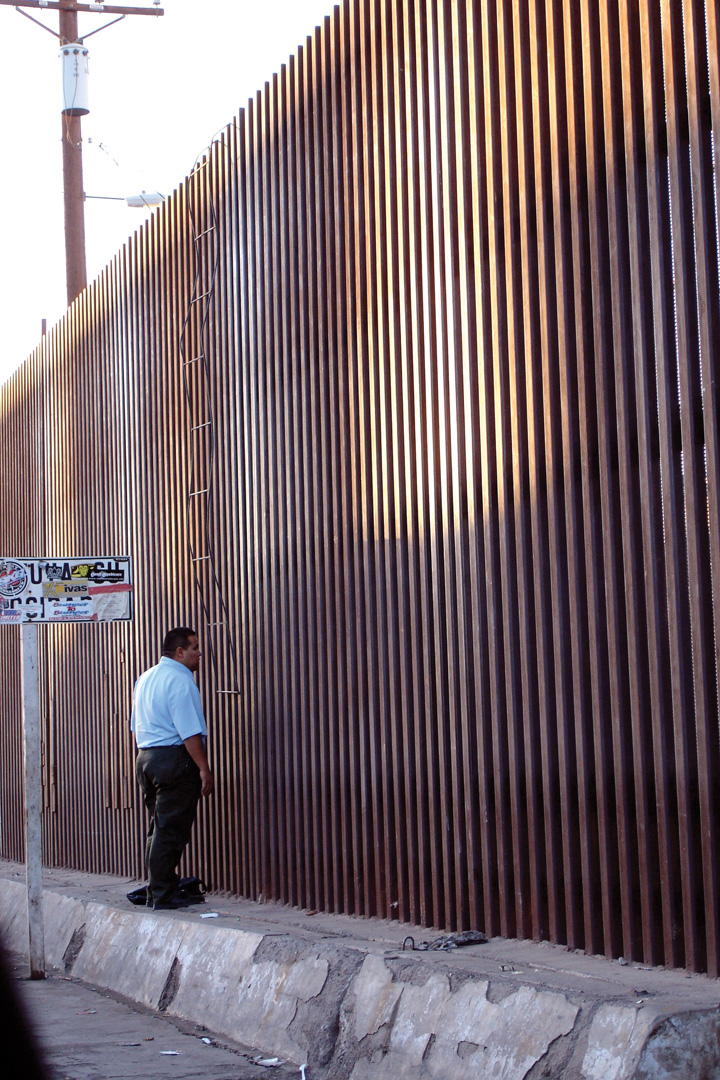 The draw of opportunities and advantages has always pulled people toward the United States. While many of the Latin American immigrants enter the United States legally, according to the US Department of Homeland Security’s Office of Immigration Statistics, there were about 10.8 million undocumented immigrants residing in the United States as of 2010; 62 percent are from Mexico (US Department of Homeland Security). This number is lower than it was in previous years, possibly because of the economic recession and higher-than-usual rates of unemployment. The US-Mexican border is about 1,970 miles long and runs through an arid and open region between the two countries. It is difficult to control the illegal immigration across this border, as the attraction to American jobs is so compelling that people will risk death to cross the deserts of the Southwest. According to 2010 estimates, undocumented workers make up about 5 percent of the United States’ civilian workforce, including approximately 24 percent of the agricultural workforce.

The amount of remittances sent from undocumented workers in the United States to Mexico is estimated in the billions of dollars. The remittances from Mexican nationals living outside Mexico and sending money home to their families are Mexico’s second-largest source of foreign income. Without remittances, many Mexican families would have a difficult time making ends meet.

Most African Americans were concentrated in the South before the Civil War, where they worked as slaves in the cotton and tobacco plantations that supported the region. In some counties, blacks made up most of the population, and this did not change when the war was over. Many of the newly freed slaves remained as poor agricultural workers in the South well into the twentieth century. Even as late as 1910, seven out of every eight African Americans lived in the South. 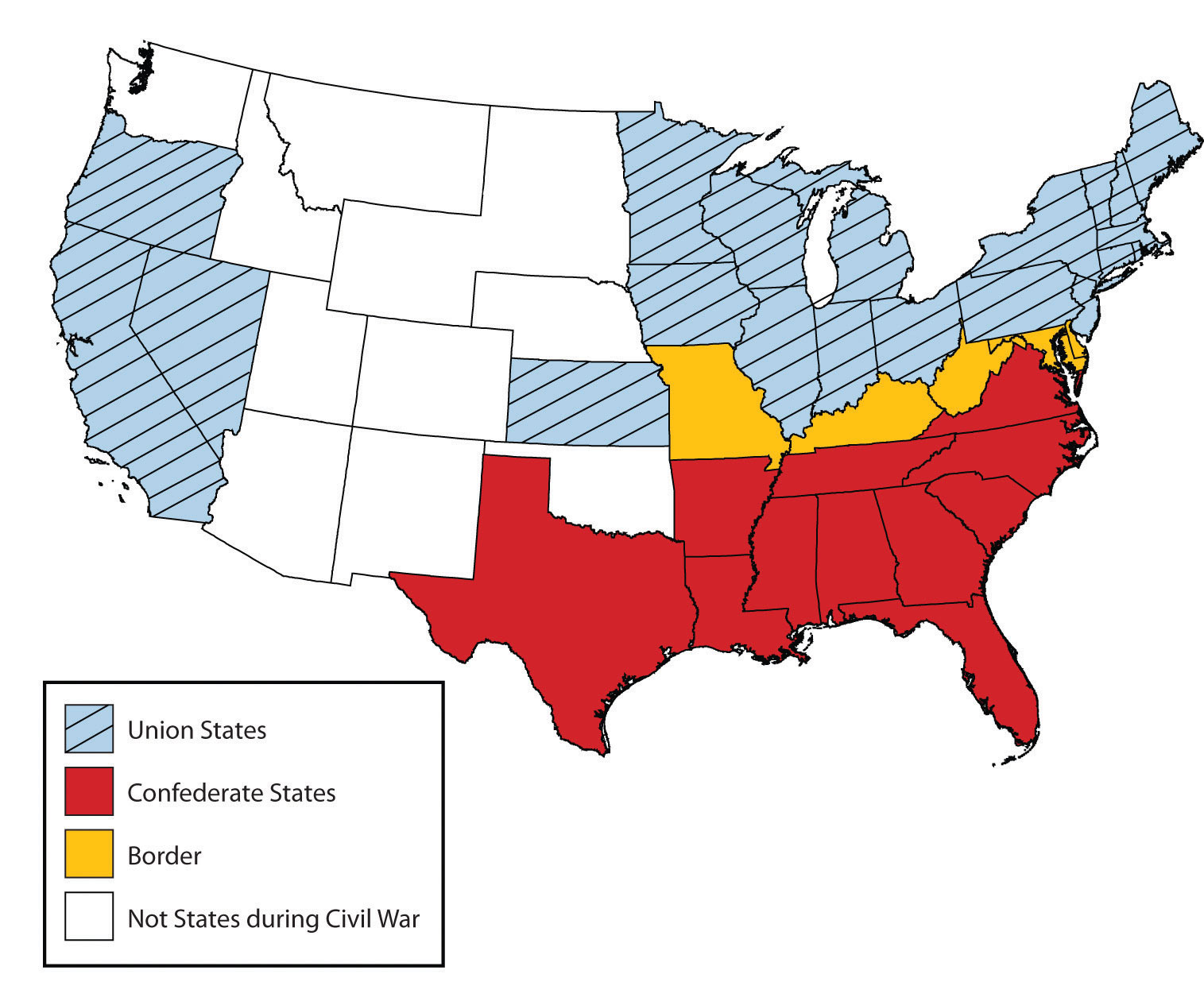 In the late nineteenth and early twentieth centuries, as the industrialization of northern cities was accelerating, the increased need for factory workers was largely met by immigration from Europe, especially from southern and eastern Europe. However, when the First World War began (1914), European immigration began to slow down. European immigration then nearly ground to a halt in the 1920s as Americans set quotas in place to reduce the number of Eastern European immigrants. At that time, the factories in the Manufacturing Belt continued to need workers, but instead of European workers, they recruited African Americans from the South.

This led to a massive migration of blacks from the South to cities of the North and West. This migration was so significant to African Americans in the United States that it is called the Great Migration. Between 1910 and 1925, more than 10 percent of African Americans made the journey north, and even more followed. Examining a map of the distribution of African Americans today shows the legacy of the Great Migration, as blacks live in many parts of the United States, both in the South and in postindustrial cities of the north and the Midwest. Blacks also now live in Sun Belt cities, as people of all races look for jobs related to the new information technologies and service industries. 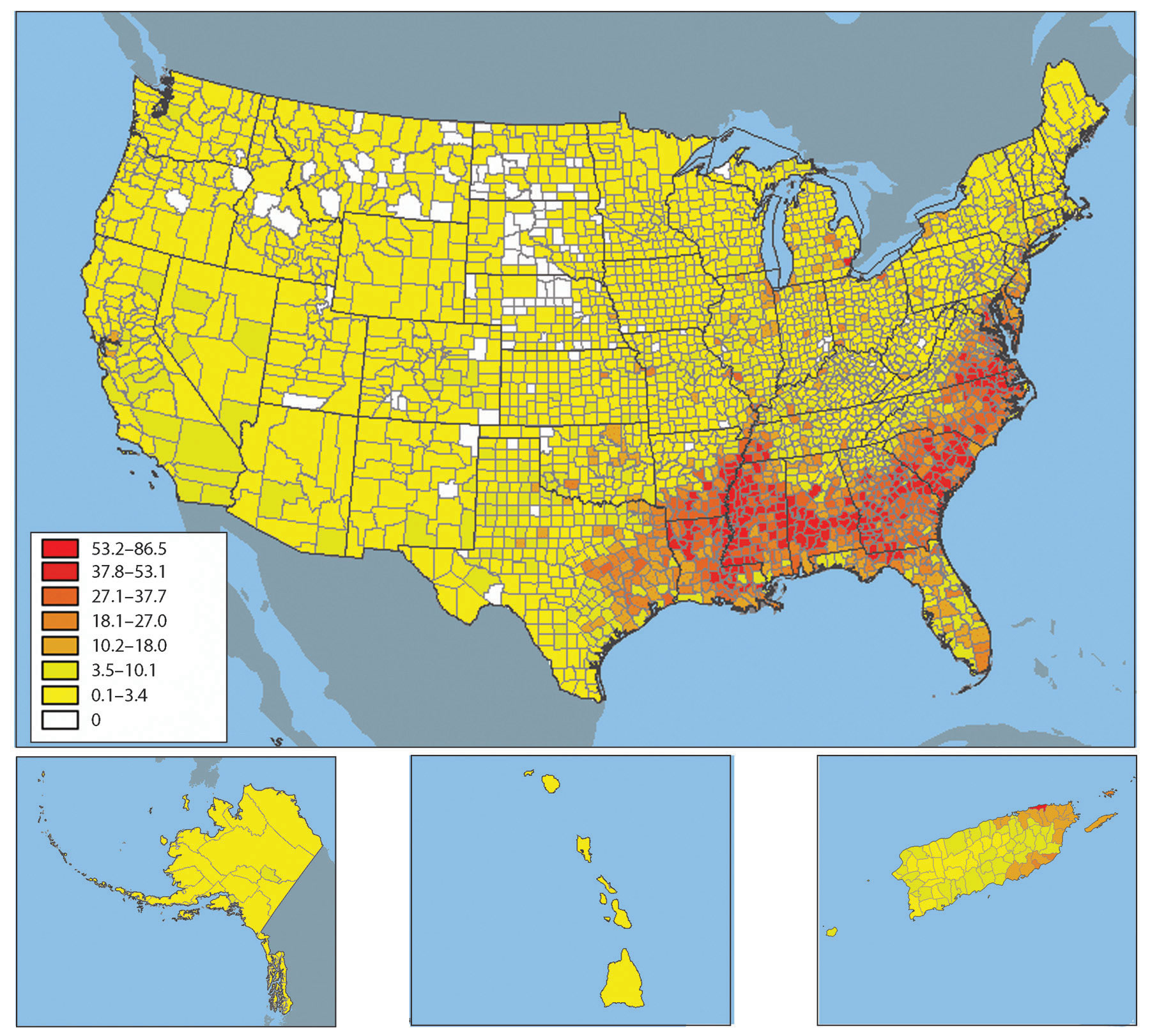 Geography of Religion in the United States

Most early settlers to the United States were Protestant Christians: Puritans lived in New England and Anglicans (later called Episcopalians) lived in Virginia. Roman Catholic immigrants settled in Maryland, and members of the Society of Friends (Quakers) founded Pennsylvania. Even within that overall picture, there was a great deal of religious diversity in the United States, and that diversity increased as new arrivals came from different countries with different religious backgrounds. The current pattern of religious affiliation in the United States remains quite complex, and one can find observers of nearly every major religion, and many minor ones, in virtually every area of the country. That being said, there are clear patterns to the geography of religion in the United States that tell stories of immigration and migration history, as well as stories about other aspects of American history. The map of leading church bodies (Figure 4.18 “Distribution of Religious Organizations in the United States”) shows regions of religious observance that are worth examining. 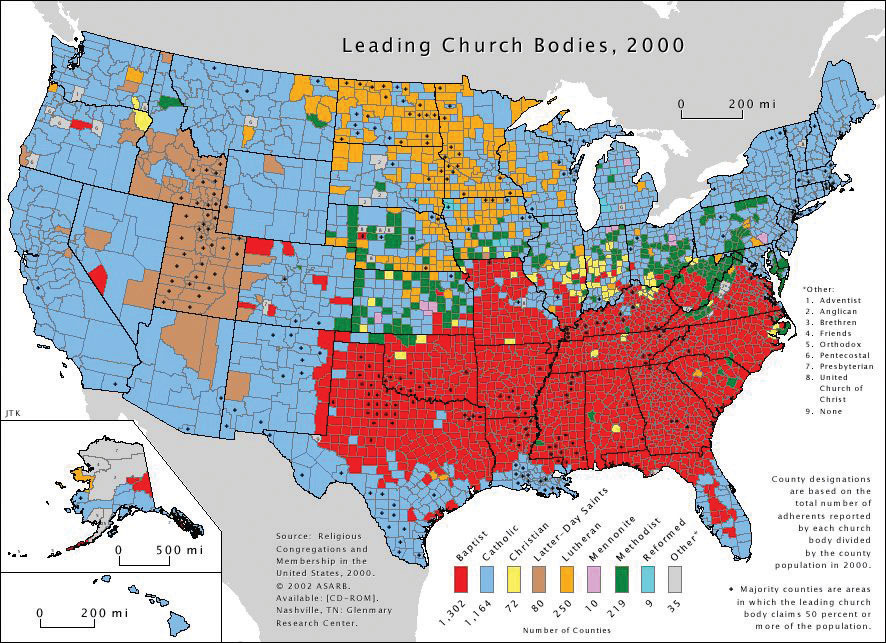 Figure 4.19. Dehart’s Bible and Tire is located in the peripheral region of eastern Kentucky in the Bible Belt. Customers get a free Bible with every set of new tires. Photo by R. Berglee – CC BY-NC-SA.

Another interesting Protestant region is northern Appalachia and the lower Midwest from Ohio to Iowa and Kansas. As seen on the map, some of these counties are Baptist, in some of them the strongest church presence is Methodist, and in others it is Christian churches (Disciples of Christ and historically similar denominations) that prevail. The Methodist and other Christian areas were heavily influenced by the Second Great Awakening of the early nineteenth century, which promoted the theology that every person could be saved through revivals. The movement provided for strong showings of Protestant denominations that arose during that time. The third Protestant region is the northern Midwest and Great Plains: Minnesota, the Dakotas, and surrounding areas. This was the destination of German and Scandinavian Lutheran settlers during the late nineteenth and early twentieth centuries, and the leading denominations today in much of that area remain Lutheran.

The Roman Catholic Church, which is the leading religious body in 40 percent of US counties, is well represented in the Northeast, West, and Southwest. In the Northeast and Midwest, the Catholic dominance points to nineteenth- and early twentieth-century immigration from Roman Catholic countries in Europe such as Italy, Ireland, and Poland. Those earlier Catholics have been joined more recently by large numbers of Hispanic immigrants. The dominance of Roman Catholics in the western United States, the Southwest, and even Florida in the Southeast are a reflection of the strong Hispanic presence in those parts of the country.

In the western United States, the Church of Jesus Christ of Latter-Day Saints (Mormon church or LDS) dominates a region including Utah and surrounding states. Utah was the destination of Mormon members as they migrated westward during the mid-nineteenth century.

Major urban centers are home to people who follow all the major religions of the world. Muslim populations are found in cities as a result of late twentieth century immigrants arriving from countries such as India, Pakistan, and places in the Middle East and moving to urban areas for employment. Detroit and its surrounding counties in southeastern Michigan are one part of the country with a high concentration of Muslim immigrants.