The ideology of Nazism brought together elements of antisemitism, racial hygiene, and eugenics with pan-Germanism (“Heim ins Reich“) and territorial expansionism with the goal of obtaining more Lebensraum (“living space”) for the Germanic people.

settler colonialism
A form of colonial formation whereby foreign people move into a region. An imperial power oversees the immigration of these settlers who consent, often only temporarily, to government by that authority. This colonization sometimes leads, by a variety of means, to depopulation of the previous inhabitants, and the settlers take over the land left vacant by the previous residents.
“Heim ins Reich”
A foreign policy pursued by Adolf Hitler during World War II, beginning in 1938. The aim of Hitler’s initiative was to convince all Volksdeutsche (ethnic Germans) living outside of Nazi Germany (in Austria and the western districts of Poland) that they should strive to bring these regions “home” into Greater Germany and relocate from outside German-controlled territories following the conquest of Poland in accordance with the Nazi-Soviet pact.
Lebensraum
German for “living space,” this term refers to policies and practices of settler colonialism proliferated in Germany from the 1890s to the 1940s.
Anschluss
This is the term used to describe the annexation of Austria into Nazi Germany in March 1938, but the idea goes back to the 19th century.

The German concept of Lebensraum (English: “living space”) refers to policies and practices of settler colonialism proliferated in Germany from the 1890s to the 1940s. The most extreme form of this ideology was supported by the Nazi Party (NSDAP) in the Third Reich until the end of World War II. First popularized around 1901, Lebensraum became a geopolitical goal of Imperial Germany in World War I (1914–1918).

In Mein Kampf (1925), Adolf Hitler dedicated a full chapter titled “Eastern Orientation or Eastern Policy,” outlining the need for the new living space for Germany. He claimed that achieving Lebensraum required political will, and that the National Socialist Movement should strive to expand the population area of the German people and acquire new sources of food. Hitler rejected the restoration of the pre-war borders of Germany as an inadequate half-measure toward reducing purported national overpopulation. From that perspective, he opined that the nature of national borders is always unfinished and momentary, and that their redrawing must continue as Germany’s political goal. Hence, Hitler identified the geopolitics of Lebensraum as the ultimate political will of his Party:

And so, we National Socialists consciously draw a line beneath the foreign policy tendency of our pre–War period. We take up where we broke off six hundred years ago. We stop the endless German movement to the south and west, and turn our gaze toward the land in the East. At long last, we break off the colonial and commercial policy of the pre–War period and shift to the soil policy of the future.

Following Hitler’s rise to power, Lebensraum became an ideological principle of Nazism and provided justification for the German territorial expansion into East-Central Europe. The Nazi Generalplan Ost policy (the Master Plan for the East) was based on its tenets. It stipulated that most of the indigenous populations of Eastern Europe would have to be removed permanently (either through mass deportation to Siberia, death, or enslavement) including Polish, Ukrainian, Russian, and other Slavic nations considered racially inferior. The Third Reich aimed at repopulating these lands with Germanic colonists in the name of Lebensraum during World War II and thereafter. The entire populations were to be decimated by starvation, allowing for their own agricultural surplus to feed Germany. The invasion of Poland, which started WWII, was motivated by the Lebensraum principle and planned under Generalplan Ost.

Hitler’s strategic program for world domination was based on the belief in the power of Lebensraum, pursued by a racially superior society. People deemed to be part of inferior races within the territory of Lebensraum expansion were subjected to expulsion or destruction. The eugenics of Lebensraum assumed the right of the German Aryan master race (Herrenvolk) to remove indigenous people they considered to be of inferior racial stock (Untermenschen) in the name of their own living space. Nazi Germany also supported other “Arian” nations pursuing their own Lebensraum, including Fascist Italy’s Spazio vitale.

Greater Germany and Lebensraum: The Greater Germanic Reich, to be realized with the policies of Lebensraum, had boundaries derived from the plans of the Generalplan Ost.

Anschluss (English: “connection” or “joining”) is the term used to describe the annexation of Austria into Nazi Germany in March 1938. The idea of an Anschluss (Austria and Germany uniting to form a “Greater Germany”) began after the Unification of Germany excluded Austria and the Austrian Germans from the Prussian-dominated German nation-state in 1871. The idea of grouping all Germans into a nation-state country had been the subject of debate in the 19th century from the end of the Holy Roman Empire until the end of the German Confederation.

Following the end of World War I in 1918, the Republic of German-Austria attempted union with Germany, but the Treaty of Saint Germain (September 10, 1919) and the Treaty of Versailles (June 28, 1919) forbade both the union and the continued use of the name “German-Austria.”

The constitutions of the Weimar Republic and the First Austrian Republic included the political goal of unification, which was widely supported by democratic parties. In the early 1930s, popular support in Austria for union with Germany remained overwhelming, and the Austrian government looked to a possible customs union with German Republic in 1931.

When the Nazis, led by Adolf Hitler, rose to power in the Weimar Republic, the Austrian government withdrew from economic ties. Austria shared the economic turbulence of the Great Depression, with a high unemployment rate and unstable commerce and industry. During the 1920s it was a target for German investment capital. By 1937 rapid German rearmament increased Berlin’s interest in annexing Austria, rich in raw materials and labor. It supplied Germany with magnesium and the products of the iron, textile, and machine industries. It had gold and foreign currency reserves, many unemployed skilled workers, hundreds of idle factories, and large potential hydroelectric resources.

The Nazis aimed to re-unite all Germans either born or living outside of the Reich to create an “all-German Reich.” Hitler wrote in Mein Kampf that he would create a union between his birth country Austria and Germany by any means possible (“German-Austria must be restored to the great German Motherland.” “People of the same blood should be in the same Reich.”).

Austria was annexed by Nazi Germany on March 12, 1938. There had been several years of pressure from supporters in Austria and Germany (both Nazis and non-Nazis) for the “Heim ins Reich” (“back home to the Reich”) movement. Earlier, Nazi Germany provided support for the Austrian National Socialist Party (Austrian Nazi Party) in its bid to seize power from Austria’s Fatherland Front government.

On March 9, 1938, Iin the face of rioting by the small but virulent Austrian Nazi Party and ever-expanding German demands on Austria, Chancellor Kurt Schuschnigg called a plebiscite referendum (popular vote) on the issue, to be held on March 13. Infuriated, on March 11 Adolf Hitler threatened invasion of Austria and demanded Chancellor von Schuschnigg’s resignation and the appointment of the Nazi Arthur Seyss-Inquart as his replacement. Hitler’s plan was for Seyss-Inquart to call immediately for German troops to rush to Austria’s aid, restoring order and giving the invasion an air of legitimacy. In the face of this threat, Schuschnigg informed Seyss-Inquart that the plebiscite would be cancelled.

Nevertheless, the Hitler underestimated his opposition. Schuschnigg did resign on the evening of March 11, but President Wilhelm Miklas refused to appoint Seyss-Inquart as chancellor. At 8:45 p.m., Hitler, tired of waiting, ordered the invasion to commence at dawn on March 12 regardless. Around 10 p.m., a forged telegram was sent in Seyss-Inquart’s name asking for German troops, since he was not yet chancellor and was unable to do so himself. Seyss-Inquart was not installed as chancellor until after midnight, when Miklas resigned himself to the inevitable.

As Pulitzer Prize-winning journalist Edgar A Mowrer, reporting from Paris for CBS, observed: “There is no one in all France who does not believe that Hitler invaded Austria not to hold a genuine plebiscite, but to prevent the plebiscite planned by Schusschnigg from demonstrating to the entire world just how little hold National Socialism really had on that tiny country.” Clearly it was Hitler and not Schuschnigg who was terrified by the potential results of the scheduled plebiscite, and that was the best indication of where Austrians’ loyalty lay.

The newly installed Nazis within two days transferred power to Germany, and Wehrmacht troops entered Austria to enforce the Anschluss. The Nazis held a controlled plebiscite in the whole Reich within the following month, asking the people to ratify the annexation, and claimed that 99.7561% of the votes cast in Austria were in favor. Austrian citizens of Jewish origin were not allowed to vote. 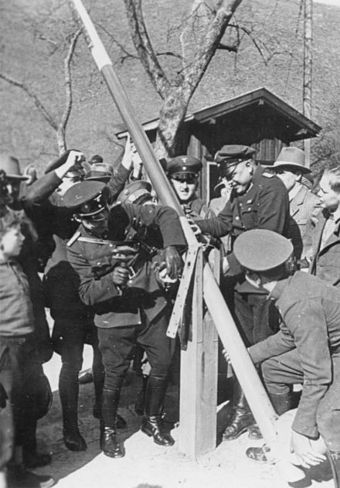