Culture is often referred to as a blueprint or guideline shared by a group of people that specifies how to live. It includes ideas about what is right and wrong, what to strive for, what to eat, how to speak, what is valued, as well as what kinds of emotions are called for in certain situations. Culture teaches us how to live in a society and allows us to advance because each new generation can benefit from the solutions found and passed down from previous generations. 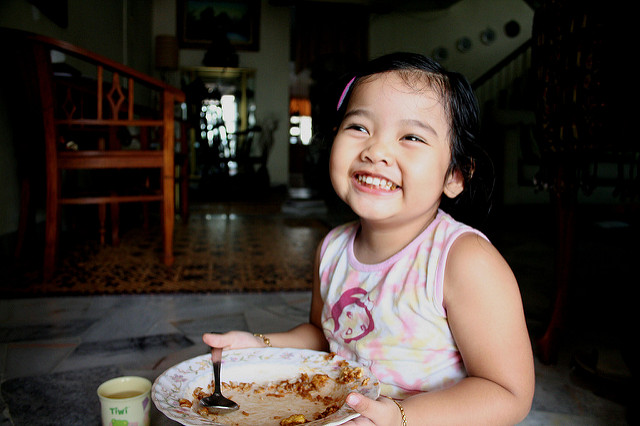 What, and how, we eat is often determined by our culture.

Culture is learned from parents, schools, churches, media, friends and others throughout a lifetime. The kinds of traditions and values that evolve in a particular culture serve to help members function in their own society and to value their own society. We tend to believe that our own culture’s practices and expectations are the right ones. (This belief that our own culture is superior is called ethnocentrism and is a normal by-product of growing up in a culture. It becomes a roadblock, however, when it inhibits understanding of cultural practices from other societies.) Cultural relativity is an appreciation for cultural differences and the understanding that cultural practices are best understood from the standpoint of that particular culture.

Culture is an extremely important context for human development and understanding development requires being able to identify which features of development are culturally based. This understanding is somewhat new and still being explored. So much of what developmental theorists have described in the past has been culturally bound and difficult to apply to various cultural contexts. The reader should keep this in mind and realize that there is still much that is unknown when comparing development across cultures. (For example, consider Erikson’s assumption that teenagers struggle with identity assumes that all teenagers live in a society in which they have many options and must make an individual choice about their future. In many parts of the world, one’s identity is determined by family status or society’s dictates. In other words, there is no choice to make.)

Even the most biological of events can be viewed in cultural contexts that vary extremely. Consider two very different cultural responses to menstruation in young girls. In the United States, girls in public school often receive information on menstruation in around 5th grade. The extent to which they are also taught about sexual intercourse, reproduction, or sexually transmitted infections depends on the policy of the school district guided by state and local community standards and sentiments. But menstruation is addressed and girls receive information and a kit containing feminine hygiene products, brochures, and other items. For example, menstruation is interpreted as an event that can affect the mood of a young girl and temporarily render her difficult, hostile, or simply hard to be around. But, she is encouraged to have a “happy” period with this product and is also encouraged to wish her friends a happy period as well through a product-sponsored website (www.beinggirl.com/happy).

Contrast this with the concern that a lack of sanitary “towels” or feminine napkins causes many girls across Africa to miss more than a month of school each year during menstruation. Education is essential in these countries for moving ahead and the lack of sanitary towels places these girls at a tremendous educational disadvantage. The one-dollar price tag on towels is prohibitive in countries such as Kenya where most families earn about 54 cents per day. The lack of towels also results in unsanitary practices such as the use of blankets or old cloths to manage the menstrual flow. In some parts of Africa, reusable or washable sanitary towels are used, but in countries such as Kenya where there is little water, this would not be a solution. And in instances where towels were donated and given out without educating girls on how to use them, girls have folded them up and used them as tampons, a practice that can lead to serious infection (Mawathe, 2006). (Find out more about this at the Girl Child Network at http://www.girlchildnetwork.org/sanitary-towels-campaign-programme.html).

Think of other ways culture may have affected your development. How might cultural differences influence interactions between teachers and students, nurses and patients, or other relationships?