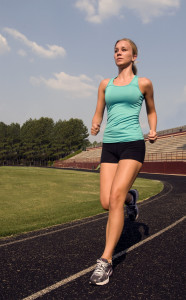 The Physiological Peak: People in their twenties and thirties are considered young adults. If you are in your early twenties, good news-you are probably at the peak of your physiological development. Your reproductive system, motor ability, strength, and lung capacity are operating at their best. Now here is the bad news. These systems will now start a slow, gradual decline so that by the time you reach your mid to late 30s, you will begin to notice signs of aging. This includes a decline in your immune system, your response time, and in your ability to recover quickly from physical exertion. For example, you may have noticed that it takes you quite some time to stop panting after running to class or taking the stairs. But, here is more good news. Getting out of shape is not an inevitable part of aging; it is probably due to the fact that you have become less physically active and have experienced greater stress. How is that good news, you ask? It’s good news because it means that there are thing you can do to combat many of these changes. So keep in mind, as we continue to discuss the life span that many of the changes we associate with aging can be turned around if we adopt healthier lifestyles.

A Healthy, but Risky Time: Doctor’s visits are less frequent in early adulthood than for those in midlife and late adulthood and are necessitated primarily by injury and pregnancy (Berger, 2005). However, among the top five causes of death in young adulthood are non-intentional injury (including motor vehicle accidents), homicide, and suicide (Heron, M. P. & B. L. Smith, 2007). Cancer and heart disease complete the list. Rates of violent death (homicide, suicide, and accidents) are highest among young adult males, and vary among by race and ethnicity. Rates of violent death are higher in the United States than in Canada, Mexico, Japan, and other selected countries.  Males are 3 times more likely to die in auto accidents than are females (Frieden, 2011).

Substance Abuse: Rates of violent death are influenced by substance abuse which peaks during early adulthood. Illicit drug use peaks between the ages of 19 and 22 and then begins to decline (Berk, 2007). And twenty-five percent of those who smoke cigarettes, a third of those who smoke marijuana, and 70 percent of those who abuse cocaine began using after age 17 (Volkow, 2004).  Some young adults use as a way of coping with stressors from family, personal relationships, or concerns over being on one’s own. Others use because they have friends who use and in the early 20s, there is still a good deal of pressure to conform. Half of all alcohol consumed in the United States is in the form of binge drinking (Frieden, 2011).

Drugs impair judgment, reduce inhibitions, and alter mood, all of which can lead to dangerous behavior. Reckless driving, violent altercations, and forced sexual encounters are some examples. Binge drinking on college campuses has received considerable media and public attention. The role alcohol plays in predicting acquaintance rape on college campuses is of particular concern. In the majority of cases of rape, the victim knows the rapist. Being intoxicated increases a female’s risk of being the victim of date or acquaintance rape (Fisher et als. in Carroll, 2007). And, she is more likely to blame herself and to be blamed by others if she was intoxicated when raped. Males increase their risk of being accused of rape if they are drunk when an incidence occurred (Carroll, 2007).

Reproduction: For many couples, early adulthood is the time for having children. However, delaying childbearing until the late 20s or early 30s has become more common in the United States.

Couples delay childbearing for a number of reasons. Women are more likely to attend college and begin careers before starting families. And both men and women are delaying marriage until they are in their late 20s and early 30s.

Fertility treatment: The majority of infertility cases (85-90 percent) are treated using fertility drugs to increase ovulation or with surgical procedures to repair the reproductive organs or remove scar tissue from the reproductive tract.  In vitro fertilization is used to treat infertility in less than 5 percent of cases. IVF is used when a woman has blocked or deformed fallopian tubes or sometimes when a man has a very low sperm count. This procedure involves removing eggs from the female and fertilizing the eggs outside the woman’s body. The fertilized egg is then reinserted in the woman’s uterus. The average cost of IVF is over $12,000 and the success rate is between 5 to 30 percent. IVF makes up about 99 percent of artificial reproductive procedures.