It is natural for us to classify items into groups, or sets, and consider how those sets overlap with each other. We can use these sets understand relationships between groups, and to analyze survey data.

A set is a collection of distinct objects, called elements of the set

A set can be defined by describing the contents, or by listing the elements of the set, enclosed in curly brackets.

Some examples of sets defined by describing the contents:

Some examples of sets defined by listing the elements of the set:

Commonly, we will use a variable to represent a set, to make it easier to refer to that set later.

The symbol ∈ means “is an element of”.

A set that contains no elements, { }, is called the empty set and is notated ∅

Sometimes a collection might not contain all the elements of a set. For example, Chris owns three Madonna albums. While Chris’s collection is a set, we can also say it is a subset of the larger set of all Madonna albums.

A subset of a set A is another set that contains only elements from the set A, but may not contain all the elements of A.

A proper subset is a subset that is not identical to the original set—it contains fewer elements.

If B is a proper subset of A, we write B ⊂ A

Here B ⊂ A since every element of B is also an even number, so is an element of A.

It is also true that B ⊂ C.

C is not a subset of A, since C contains an element, 3, that is not contained in A

Suppose a set contains the plays “Much Ado About Nothing,” “MacBeth,” and “A Midsummer’s Night Dream.” What is a larger set this might be a subset of?

Commonly sets interact. For example, you and a new roommate decide to have a house party, and you both invite your circle of friends. At this party, two sets are being combined, though it might turn out that there are some friends that were in both sets.

Using the sets from the previous example, find A ⋃ C and Bc ⋂ A

To visualize the interaction of sets, John Venn in 1880 thought to use overlapping circles, building on a similar idea used by Leonhard Euler in the eighteenth century. These illustrations now called Venn Diagrams. 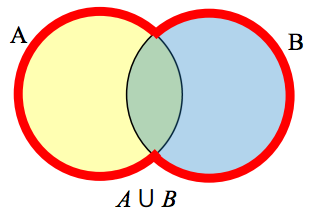 A ⋂ B contains only those elements in both sets—in the overlap of the circles. 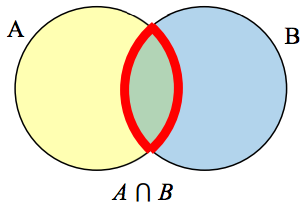 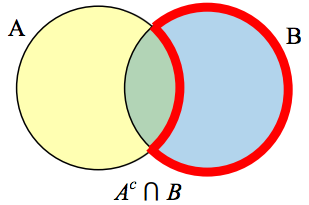 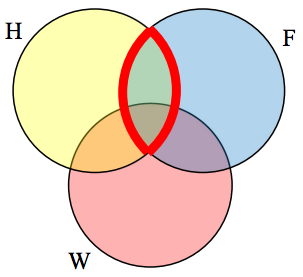 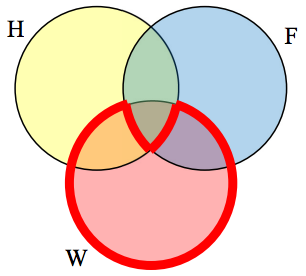 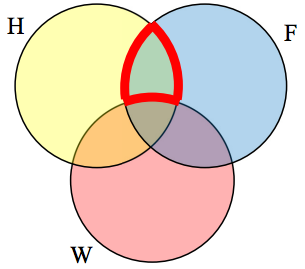 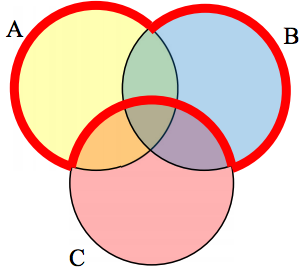 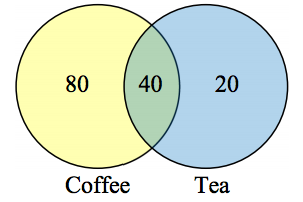 A survey asks: “Which online services have you used in the last month?” 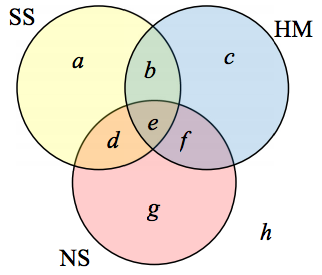 Similarly, since there are 10 students taking HM and NS, which includes regions e and f, there must be 10 – 3 = 7 students in region f.