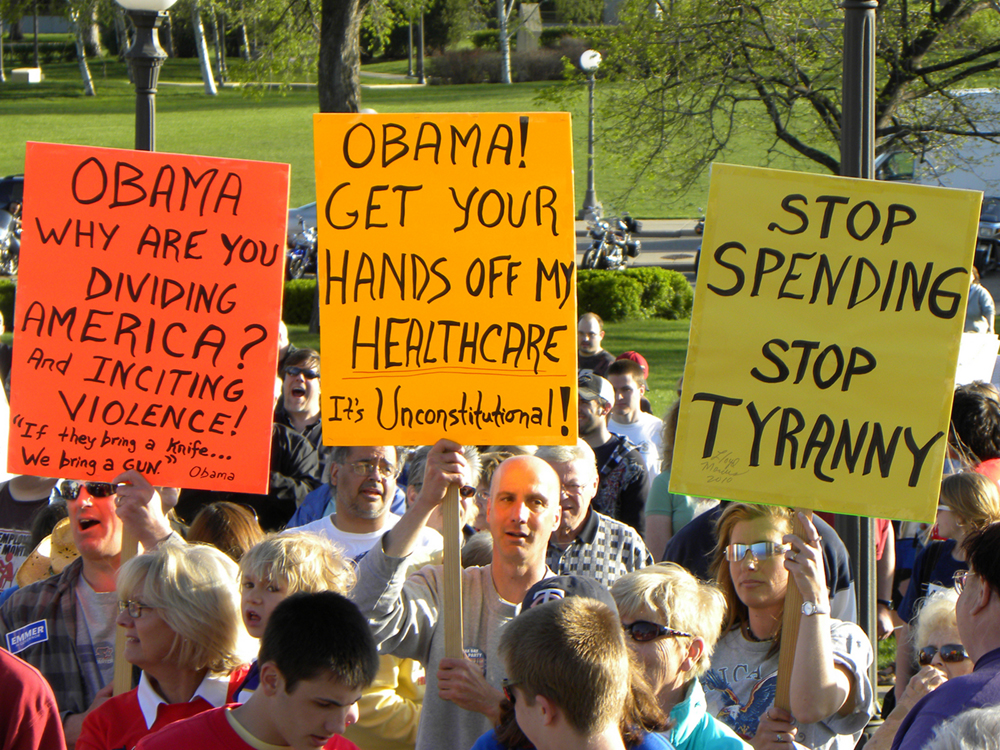 Many people in the United States worry that governmental oversight of healthcare represents a federal overstepping of constitutional guarantees of individual freedom. Others welcome a program that they believe will make healthcare accessible and affordable to everyone. (Photo courtesy of Fibonacci Blue/flickr)

The PPACA remains contentious. The Supreme Court ruled in the case of National Federation of Independent Businesses v. Sebelius in 2012, that states cannot be forced to participate in the PPACA’s Medicaid expansion. This ruling has opened the door to challenges to the PPACA in Congress and the Federal courts, some state governments, conservative groups and independent businesses. A concern to public health officials is fear among some parents that certain vaccines such as the measels, mumps, and rubella (MMR) vaccine are linked to higher risk of autism. According to Uchiyama et al (2007), there is no link between the MMR and autism. However fear of this perceived link pushes some parents to refuse the MMR vaccine for their children.

One critique of the Patient Protection and Affordable Care Act is that it will create a system of socialized medicine, a term that for many people in the United States has negative connotations lingering from the Cold War era and earlier. Under a socialized medicine system, the government owns and runs the system. It employs the doctors, nurses, and other staff, and it owns and runs the hospitals (Klein 2009). The best example of socialized medicine is in Great Britain, where the National Health System (NHS) gives free healthcare to all its residents. And despite some U.S. citizens’ knee-jerk reaction to any healthcare changes that hint of socialism, the United States has one socialized system with the Veterans Health Administration.

This map shows the countries where malaria is known to occur. In low-income countries, malaria is still a common cause of death. (Photo courtesy of the CDC/Wikimedia Commons)

WHO, which is the health arm of the United Nations, set eight Millennium Development Goals (MDGs) in 2000 with the aim of reaching these goals by 2015. Some of the goals deal more broadly with the socioeconomic factors that influence health, but MDGs 4, 5, and 6 all relate specifically to large-scale health concerns, the likes of which most people in the United States will never contemplate. MDG 4 is to reduce child mortality, MDG 5 aims to improve maternal health, and MDG 6 strives to combat HIV/AIDS, malaria, and other diseases. The goals may not seem particularly dramatic, but the numbers behind them show how serious they are.

For MDG 4, the WHO reports that 2009 infant mortality rates in “children under 5 years old in the WHO African Region (127 per 1000 live births) and in low-income countries (117 per 1000 live births) [had dropped], but they were still higher than the 1990 global level of 89 per 1000 live births” (World Health Organization 2011). The fact that these deaths could have been avoided through appropriate medicine and clean drinking water shows the importance of healthcare.

Much progress has been made on MDG 5, with maternal deaths decreasing by 34 percent. However, almost all maternal deaths occurred in developing countries, with the African region still experiencing high numbers (World Health Organization 2011).

On MDG 6, the WHO is seeing some decreases in per capita incidence rates of malaria, tuberculosis, HIV/AIDS, and other diseases. However, the decreases are often offset by population increases (World Health Organization 2011). Again, the lowest-income countries, especially in the African region, experience the worst problems with disease. An important component of disease prevention and control is epidemiology, or the study of the incidence, distribution, and possible control of diseases. Fear of Ebola contamination, primarily in Western Africa but also to a smaller degree in the United States, became national news in the summer and fall of 2014.

Which program is an example of socialized medicine?

Show Answer
B
What does the individual mandate provision of the 2010 U.S. healthcare reform do?
Show Answer
C

What do you think are the best and worst parts of the PPACA? Why?

Compare and contrast the healthcare system of the United States with the WHO’s Millennium Development Goals.

Docteur, Elizabeth, and Robert A. Berenson. 2009. “How Does the Quality of U.S. Health Care Compare Internationally?” Timely Analysis of Immediate Health Policy Issues 9:1–14.

Klein, Ezra. 2009. “Health Reform for Beginners: The Difference between Socialized Medicine, Single-Payer Health Care, and What We’ll Be Getting.” The Washington Post, December 14. Retrieved December 15, 2011 ( http://www.bloomberg.com/news/2011-12-15/don-t-let-death-panels-kill-a-better-way-to-die-commentary-by-ezra-klein.html).

Kogan, Richard. 2011. “Program Cuts Under a Balanced Budget Amendment: How Severe Might They Be?” Center on Budget and Policy Priorities. Retrieved December 15, 2011 (http://www.cbpp.org/cms/?fa=view&id=3619).

universal healthcare
a system that guarantees healthcare coverage for everyone