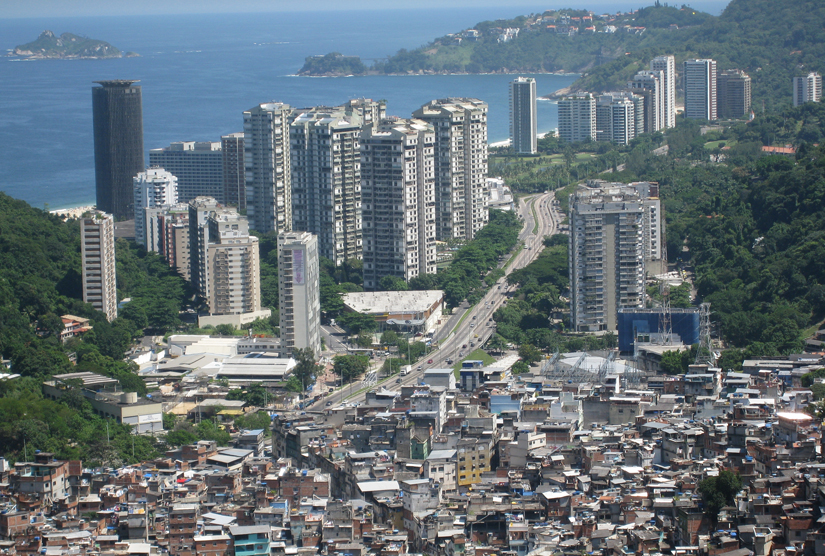 Contemporary economic development often follows a similar pattern around the world, best described as a growing gap between the have and have-nots. (Photo courtesy of Alicia Nijdam/Wikimedia Commons)

The April 24, 2013 collapse of the Rana Plaza in Dhaka, Bangladesh that killed over 1,100 people, was the deadliest garment factory accident in history, and it was preventable (International Labour Organization, Department of Communication 2014).

In addition to garment factories employing about 5,000 people, the building contained a bank, apartments, childcare facilities, and a variety of shops. Many of these closed the day before the collapse when cracks were discovered in the building walls. When some of the garment workers refused to enter the building, they were threatened with the loss of a month’s pay. Most were young women, aged twenty or younger. They typically worked over thirteen hours a day, with two days off each month. For this work, they took home between twelve and twenty-two cents an hour, or $10.56 to $12.48 a week. Without that pay, most would have been unable to feed their children. In contrast, the U.S. federal minimum wage is $7.25 an hour, and workers receive wages at time-and-a-half rates for work in excess of forty hours a week.

Did you buy clothes from Walmart in 2012? What about at The Children’s Place? Did you ever think about where those clothes came from? Of the outsourced garments made in the garment factories, thirty-two were intended for U.S, Canadian, and European stores. In the aftermath of the collapse, it was revealed that Walmart jeans were made in the Ether Tex garment factory on the fifth floor of the Rana Plaza building, while 120,000 pounds of clothing for The Children’s Place were produced in the New Wave Style Factory, also located in the building. Afterward, Walmart and The Children’s Place pledged $1 million and $450,000 (respectively) to the Rana Plaza Trust Fund, but fifteen other companies with clothing made in the building have contributed nothing, including U.S. companies Cato and J.C. Penney (Institute for Global Labour and Human Rights 2014).

While you read this chapter, think about the global system that allows U.S. companies to outsource their manufacturing to peripheral nations, where many women and children work in conditions that some characterize as slave labor. Do people in the United States have a responsibility to foreign workers? Should U.S. corporations be held accountable for what happens to garment factory workers who make their clothing? What can you do as a consumer to help such workers?