Some states, such as Alaska, are endowed with natural resources. They can use their oil or natural gas reserves to their advantage to fund education or reduce taxes. Other states, like Florida, are favored with a climate that attracts tourists and retirees each winter, drawing in revenues to support infrastructure improvements throughout the state. These differences can lead to strategic advantages in the economic fortunes of a state, which can translate into differences in the levels of taxes that must be collected from citizens.

But their economic fortunes are only one component of what makes individual states unique. Theorists have long proposed that states are also unique as a function of their differing political cultures, or their attitudes and beliefs about the functions and expectations of the government. In the book, American Federalism: A View from the States, Daniel Elazar first theorized in 1966 that the United States could be divided into three distinct political cultures: moralistic, individualistic, and traditionalistic. The diffusion of these cultures throughout the United States is attributed to the migratory patterns of immigrants who settled in and spread out across the country from the east to the west coast. These settlers had distinct political and religious values that influenced their beliefs about the proper role of government, the need for citizen involvement in the democratic process, and the role of political parties. 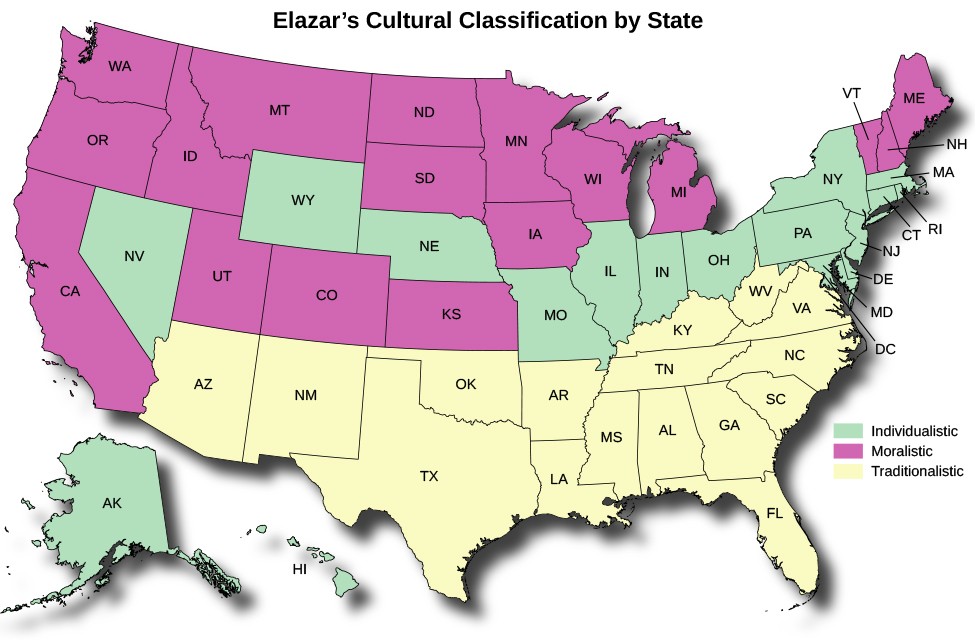 Daniel Elazar posited that the United States can be divided geographically into three types of political cultures—individualistic, moralistic, and traditionalistic—which spread with the migratory patterns of immigrants across the country.

In Elazar’s framework, states with a moralistic political culture see the government as a means to better society and promote the general welfare. They expect political officials to be honest in their dealings with others, put the interests of the people they serve above their own, and commit to improving the area they represent. The political process is seen in a positive light and not as a vehicle tainted by corruption. In fact, citizens in moralistic cultures have little patience for corruption and believe that politicians should be motivated by a desire to benefit the community rather than by a need to profit financially from service.

Moralistic states thus tend to support an expanded role for government. They are more likely to believe government should promote the general welfare by allocating funds to programs that will benefit the poor. In addition, they see it as the duty of public officials to advocate for new programs that will benefit marginal citizens or solve public policy problems, even when public pressure to do so is nonexistent.

The moralistic political culture developed among the Puritans in upper New England. After several generations, these settlers moved westward, and their values diffused across the top of the United States to the upper Great Lakes. In the middle of the 1800s, Scandinavians and Northern Europeans joined this group of settlers and reinforced the Puritans’ values. Together, these groups pushed further west through the northern portion of the Midwest and West and then along the West Coast.[1]

States that identify with this culture value citizen engagement and desire citizen participation in all forms of political affairs. In Elazar’s model, citizens from moralistic states should be more likely to donate their time and/or resources to political campaigns and to vote. This occurs for two main reasons. First, state law is likely to make it easier for residents to register and to vote because mass participation is valued. Second, citizens who hail from moralistic states should be more likely to vote because elections are truly contested. In other words, candidates will be less likely to run unopposed and more likely to face genuine competition from a qualified opponent. According to Elazar, the heightened competition is a function of individuals’ believing that public service is a worthwhile endeavor and an honorable profession.

States that align with Elazar’s individualistic political culture see the government as a mechanism for addressing issues that matter to individual citizens and for pursuing individual goals. People in this culture interact with the government in the same manner they would interact with a marketplace. They expect the government to provide goods and services they see as essential, and the public officials and bureaucrats who provide them expect to be compensated for their efforts. The focus is on meeting individual needs and private goals rather than on serving the best interests of everyone in the community. New policies will be enacted if politicians can use them to garner support from voters or other interested stakeholders, or if there is great demand for these services on the part of individuals.

According to Elazar, the individualist political culture originated with settlers from non-Puritan England and Germany. The first settlements were in the mid-Atlantic region of New York, Pennsylvania, and New Jersey and diffused into the middle portion of the United States in a fairly straight line from Ohio to Wyoming.

Given their focus on pursuing individual objectives, states with an individualistic mindset will tend to advance tax breaks as a way of trying to boost a state’s economy or as a mechanism for promoting individual initiative and entrepreneurship. For instance, New Jersey governor Chris Christie made headlines in 2015 when discussing the incentives he used to attract businesses to the state. Christie encouraged a number of businesses to move to Camden, where unemployment has risen to almost 14 percent, by providing them with hundreds of millions of dollars in tax breaks.[2] The governor hopes these corporate incentives will spur job creation for citizens who need employment in an economically depressed area of the state.

Since this theoretical lens assumes that the objective of politics and the government is to advance individual interests, Elazar argues that individuals are motivated to become engaged in politics only if they have a personal interest in this area or wish to be in charge of the provision of government benefits. They will tend to remain involved if they get enjoyment from their participation or rewards in the form of patronage appointments or financial compensation. As a result of these personal motivations, citizens in individualistic states will tend to be more tolerant of corruption among their political leaders and less likely to see politics as a noble profession in which all citizens should engage.

Finally, Elazar argues that in individualistic states, electoral competition does not seek to identify the candidate with the best ideas. Instead it pits against each other political parties that are well organized and compete directly for votes. Voters are loyal to the candidates who hold the same party affiliation they do. As a result, unlike the case in moralistic cultures, voters do not pay much attention to the personalities of the candidates when deciding how to vote and are less tolerant of third-party candidates.

Given the prominence of slavery in its formation, a traditionalistic political culture, in Elazar’s argument, sees the government as necessary to maintaining the existing social order, the status quo. Only elites belong in the political enterprise, and as a result, new public policies will be advanced only if they reinforce the beliefs and interests of those in power.

When elected officials do not prioritize public policies that benefit them, those on the social and economic fringes of society can be plagued by poverty and pervasive health problems. For example, although the map below shows that poverty is a problem across the entire United States, the South has the highest incidence. According to the Centers for Disease Control and Prevention, the South also leads the nation in self-reported obesity, closely followed by the Midwest.[3] These statistics present challenges for lawmakers not only in the short term but also in the long term, because they must prioritize fiscal constraints in the face of growing demand for services. 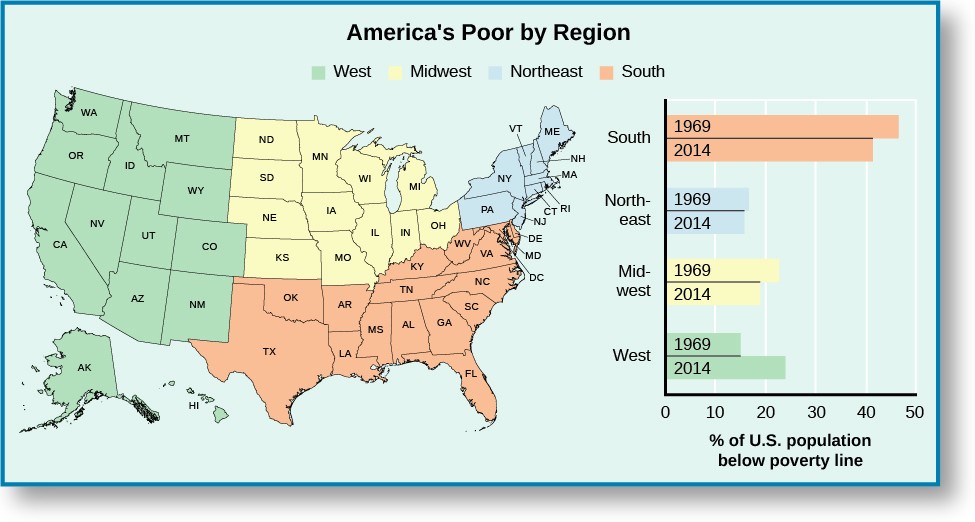 While the greatest percentage of those living below the poverty line in the United States is found in the South, migration and immigration patterns over the past fifty years have resulted in a significant increase in the percentage of the nation’s poor being located in the West.

While moralistic cultures expect and encourage political participation by all citizens, traditionalistic cultures are more likely to see it as a privilege reserved for only those who meet the qualifications. As a result, voter participation will generally be lower in a traditionalistic culture, and there will be more barriers to participation (e.g., a requirement to produce a photo ID at the voting booth). Conservatives argue that these laws reduce or eliminate fraud on the part of voters, while liberals believe they disproportionally disenfranchise the poor and minorities and constitute a modern-day poll tax.

Finally, under a traditionalistic political culture, Elazar argues that party competition will tend to occur between factions within a dominant party. Historically, the Democratic Party dominated the political structure in the South before realignment during the civil rights era. Today, depending on the office being sought, the parties are more likely to compete for voters.

Elazar’s Theory claims that Texas is a mixture of traditional and individualistic political cultures. As a result, the voter turnout in Texas is lower than most other American states, with the argument that Texans view political participation as an economic perk versus the value of contributing to society.

Several critiques have come to light since Elazar first introduced his theory of state political culture fifty years ago. The original theory rested on the assumption that new cultures could arise with the influx of settlers from different parts of the world; however, since immigration patterns have changed over time, it could be argued that the three cultures no longer match the country’s current reality. Today’s immigrants are less likely to come from European countries and are more likely to originate in Latin American and Asian countries.[4] In addition, advances in technology and transportation have made it easier for citizens to travel across state lines and to relocate. Therefore, the pattern of diffusion on which the original theory rests may no longer be accurate, because people are moving around in more, and often unpredictable, directions.

It is also true that people migrate for more reasons than simple economics. They may be motivated by social issues such as widespread unemployment, urban decay, or low-quality health care of schools. Such trends may aggravate existing differences, for example the difference between urban and rural lifestyles (e.g., the city of Atlanta vs. other parts of Georgia), which are not accounted for in Elazar’s classification. Finally, unlike economic or demographic characteristics that lend themselves to more precise measurement, culture is a comprehensive concept that can be difficult to quantify. This can limit its explanatory power in political science research.