Figure 1. In Black Canyon of the Gunnison National Park, the Gunnison River cuts through Precambrian rock nearly 2 billion years old! Most of these rocks are metamorphic and show evidence of exposure to extreme pressures and temperatures. Some of the rocks are igneous and formed from magma that pushed its way up into cracks in the Earth’s crust, where it cooled and crystallized. The metamorphic rock that dominates the walls of the Black Canyon is called gneiss (pronounced ‘nice’), and is blended with schist, another rock that normally has flat or elongated crystals. You might spot the intense folding of the alternating light and dark bands in this adjacent photo. These rocks were once buried deep below the Earth’s surface where they encountered extreme heat and pressure.

Basically, the rocks we encounter today that we classify as either igneous, metamorphic, or sedimentary, could have belonged to a different rock classification in the past, because rocks are recycled throughout geologic time. This cycle is driven by the motion of the tectonic plates. It is easy to see that increasing the temperature of a rock can produce magma, and that rocks on the surface of the Earth can break up into sediment that can ultimately lithify into a sedimentary rock. But how can we alter a solid rock into a new rock, without melting it or making it become sediment?

All rocks are formed at certain temperatures and pressures either on Earth’s surface or, more commonly, beneath the surface. These rocks are the most stable at the conditions under which they form. Therefore, changing the temperature and/or pressure conditions may lead to a different rock, one that changed in order to be stable under new external conditions. This new rock that forms in response to changes in its physical and chemical environment is called a metamorphic rock; the word metamorphism means to change form, and for rocks this means a recrystallization of minerals (crystals) under subsolidus (temperatures too low for melt production) conditions. A metamorphic change can also occur if the rock’s composition is altered by hot, chemically reactive fluids, causing a change in the mineral content of the rock. To distinguish between the pre-existing rock and the new metamorphic one, the term protolith, or parent rock, is used to describe the pre-existing rock. Therefore, all metamorphic rocks have at least one protolith that has altered during metamorphism. In this module you will learn that all metamorphic rocks are identified by the mineral content and texture of the rock; for metamorphic rocks, texture refers to the orientation of the minerals in the rock. In addition, crystal size also conveys important information regarding the temperature conditions during metamorphism.

To summarize, metamorphism is the process by which a pre-existing rock (the protolith) is altered by a change in temperature, pressure, or by contact with chemically reactive fluids, or by any combination of these three parameters. The alteration process is a recrystallization event, where the initial rock’s minerals (crystals) have changed size, shape, and/or composition in response to these new external conditions. The end result is a new (metamorphic) rock that has an altered appearance, sometimes strikingly different from what it used to look like before metamorphism occurred. The metamorphic rock you end up with is strongly dependent on what rock you started with before the metamorphic event. Of secondary importance is the agent of metamorphic change: was recrystallization a result of increased temperature, pressure, or both? Or were chemically reactive fluids involved?

One must also consider how high the temperatures and pressures were, because metamorphism can occur in a range of temperature and pressure conditions. However, as mentioned in the preceding paragraph, metamorphism occurs under subsolidus conditions, meaning that elevated temperatures that promote the recrystallization of a rock are not high enough to cause melting.

Select an image to view larger 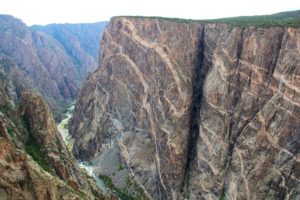 Figure 4. Vertically-tilted metamorphic rocks near Carn Eighe in the Northern Highlands of Scotland. These rocks belong to the Glenfinnan Group (part of the Moine Supergroup), and they are of Neoproterozoic age.

Figure 5. Rocks near Permaquid Lighthouse in Maine.Bands of the metamorphic rock type called gneiss, capped by a light-coloured pegmatite vein, at Pemaquid Point, near Pemaquid Lighthouse in Maine, USA. The gneiss belongs to the Bucksport Formation, formed originally as sedimentary rock during the Silurian period (about 440 to 430 million years ago). Then, during the Devonian period, the sedimentary rock was heated and squashed, which changed the rock into gneiss. Although the pegmatite has not been precisely dated, it may be of Devonian age.

Figure 7. Metamorphic Rock and Kings Canyon Road (Highway 180) The metamorphic rock is remnants of a ancient mountain range – the Nevada Range, situated at the western edge of Laurasia, the Late Jurassic supercontinent of the north.

Figure 8. Phyllite in the Precambrian of Tennessee, USA. This is an outcrop of Metcalf Phyllite in the Great Smoky Mountains. It’s one of many stratigraphic units in the ~50,000 feet thick Ocoee Supergroup. The Ocoee has considerable deposits of sandstone and shale originally deposited as sands and muds in an ancient ocean trench. Trenches form along subduction zones, where a tectonic plate composed of thin, heavy oceanic lithosphere dives down into the mantle below another tectonic plate of either oceanic lithosphere or thick, lightweight continental lithosphere. Rocks in the Metcalf Phyllite were originally shales, but have been metamorphosed to phyllites. Phyllite is a foliated, low to intermediate grade metamorphic rock dominated by mica. It often has wrinkled and crinkled foliation surfaces.

Figure 9. Slate in the Precambrian of Minnesota, USA. This is an outcrop of slate, a foliated metamorphic rock composed of clay minerals. Slate is the product of low-grade metamorphism of shale. The original shale bedding is visible in slate samples at this locality. The planar surfaces facing the viewer in the above photo are foliation planes.

Figure 10. Augen Gneiss. Gneiss is a high-grade, foliated metamorphic rock that consists of alternating bands of light- and dark-colored minerals (often quartz and biotite mica). The surface shown above consists of Precambrian-aged gneiss. The surrounding outcrop is gneiss with some shear zones and minor faults. Some epidote is present in bands and small pods. Notice the eye-shaped masses of quartz in the middle part of the photo. Gneiss with roughly eye-shaped mineral masses is called augen gneiss (augen is German for eyes).

Figure 11. Quartzite and schist near Kerguinou in Crozon, Brittany, France

Figure 12. The Vishnu Schist is a metamorphic complex that forms the basement rock of the Grand Canyon. It is a little over 1.7 billion years old.

At the completion of this module you will be able to:

See the Schedule of Work for dates of availability and due dates.

Be sure to read through the directions for all of this module’s activities before getting started so that you can plan your time accordingly. You are expected to work on this course throughout the week.

After you complete the reading, you can start working on Module 8 Assignment – Metamorphic Rock Lab

Module 8 Quiz has 10 multiple-choice questions and is based on the content of the Module 8 readings and Assignment 8.

The quiz is worth a total of 10 points (1 points per question). You will have only 10 minutes to complete the quiz, and you may take this quiz only once. Note: that is not enough time to look up the answers!

Make sure that you fully understand all of the concepts presented and study for this quiz as though it were going to be proctored in a classroom, or you will likely find yourself running out of time.

Keep track of the time, and be sure to look over your full quiz results after you have submitted it for a grade.

Your Questions and Concerns…

Please contact me if you have any questions or concerns.

Personal questions: If your question is personal, (e.g. regarding my comments to you specifically), then send me an email from within this course.