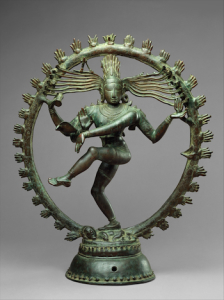 It’s important to keep in mind that the bronze male figure Shiva As Lord of the Dance (“Nataraja”—nata meaning dance or performance, and raja meaning king or lord), is a sacred object that has been taken out of its original context—in fact, we don’t even know where this particular sculpture was originally venerated. In the intimate spaces of the Florence and Herbert Irving South Asian Galleries in the Metropolitan Museum of Art, the Shiva Nataraja is surrounded by other metal statues of Hindu gods including the Lords Vishnu, Parvati, and Hanuman. It is easy to become absorbed in the dark quiet of these galleries with its remarkable collection of divine figures, but it is important to remember that this particular statue was intended to be movable, which explains its moderate size and circular base, ideal for lifting and hoisting onto a shoulder.