The Baroque and Rococo By the end of the 16th century, the Catholic Church was once again feeling optimistic, even triumphant. It had emerged from the crisis with renewed vigor and clarity of purpose. Shepherding the faithful—instructing them on Catholic doctrines and inspiring virtuous behavior—took center stage. Keen to rebuild Rome’s reputation as a holy city, the Papacy embarked on extensive building and decoration campaigns aimed at highlighting its ancient origins, its beliefs, and its divinely-sanctioned authority. In the eyes of faithful Catholics, Rome was not an unfaithful whore, but a pure bride, beautifully adorned for her union with her divine spouse. The art of this movement is called Baroque art. In the Protestant countries, and especially in the newly-independent Dutch Republic (modern-day Netherlands), the artistic climate changed radically in the aftermath of the Reformation. In the early years of the 1700s, at the end of the reign of Louis XIV (who dies in 1715), there was a shift away from the classicism and “Grand Manner” (based on the art of Poussin) that had governed the art of the preceding 50 years, toward a new style that we call Rococo.Versailles was abandoned by the aristocracy, who once again took up residence in Paris. A shift away from the monarchy, toward the aristocracy characterizes this period. 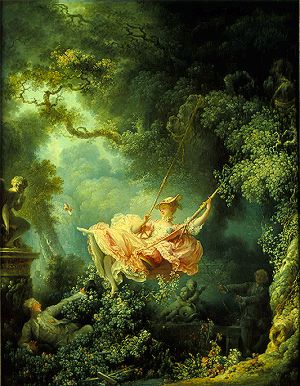 As with most Rococo paintings, the subject of Fragonard’s The Swing is not very complicated! Two lovers have conspired to get this older fellow to push the young lady in the swing while her lover hides in the bushes. Their idea is that as she goes up in the swing, she can part her legs, and he can get a perfect view up her skirt.

They are surrounded by a lush, overgrown garden. A sculptured figure to the left puts his fingers to his mouth, as though saying “hush,” while another sculpture in the background has two cupid figures cuddled together. The colors are pastel — pale pinks and greens, and although we have a sense of movement and a prominent diagonal line — the painting lacks all of the seriousness of a baroque painting.