A perfectly competitive firm has only one major decision to make—namely, what quantity to produce. To understand why this is so, consider a different way of writing out the basic definition of profit:

Total revenue and total costs for the raspberry farm, broken down into fixed and variable costs, are shown in Table 8.1 and also appear in Figure 8.2. The horizontal axis shows the quantity of frozen raspberries produced in packs; the vertical axis shows both total revenue and total costs, measured in dollars. The total cost curve intersects with the vertical axis at a value that shows the level of fixed costs, and then slopes upward. All these cost curves follow the same characteristics as the curves covered in the Cost and Industry Structure module.

Figure 8.2. Total Cost and Total Revenue at the Raspberry Farm. Total revenue for a perfectly competitive firm is a straight line sloping up. The slope is equal to the price of the good. Total cost also slopes up, but with some curvature. At higher levels of output, total cost begins to slope upward more steeply because of diminishing marginal returns. The maximum profit will occur at the quantity where the gap of total revenue over total cost is largest.

Table 8.1 Total Cost and Total Revenue at the Raspberry Farm

(Later we will see that sometimes it will make sense for the firm to shutdown, rather than stay in operation producing output.)

Watch the following video to learn more about the point of profit maximization.

Firms often do not have the necessary data they need to draw a complete total cost curve for all levels of production. They cannot be sure of what total costs would look like if they, say, doubled production or cut production in half, because they have not tried it. Instead, firms experiment. They produce a slightly greater or lower quantity and observe how profits are affected. In economic terms, this practical approach to maximizing profits means looking at how changes in production affect marginal revenue and marginal cost.

In the raspberry farm example, shown in Figure 8.3, Figure 8.4 and Table 8.3, marginal cost at first declines as production increases from 10 to 20 to 30 packs of raspberries—which represents the area of increasing marginal returns that is not uncommon at low levels of production. But then marginal costs start to increase, displaying the typical pattern of diminishing marginal returns. If the firm is producing at a quantity where MR > MC, like 40 or 50 packs of raspberries, then it can increase profit by increasing output because the marginal revenue is exceeding the marginal cost. If the firm is producing at a quantity where MC > MR, like 90 or 100 packs, then it can increase profit by reducing output because the reductions in marginal cost will exceed the reductions in marginal revenue. The firm’s profit-maximizing choice of output will occur where MR = MC (or at a choice close to that point). You will notice that what occurs on the production side is exemplified on the cost side. This is referred to as duality.

Figure 8.3. Marginal Revenues and Marginal Costs at the Raspberry Farm: Individual Farmer. For a perfectly competitive firm, the marginal revenue (MR) curve is a horizontal straight line because it is equal to the price of the good, which is determined by the market, shown in Figure 8.4. The marginal cost (MC) curve is sometimes first downward-sloping, if there is a region of increasing marginal returns at low levels of output, but is eventually upward-sloping at higher levels of output as diminishing marginal returns kick in. 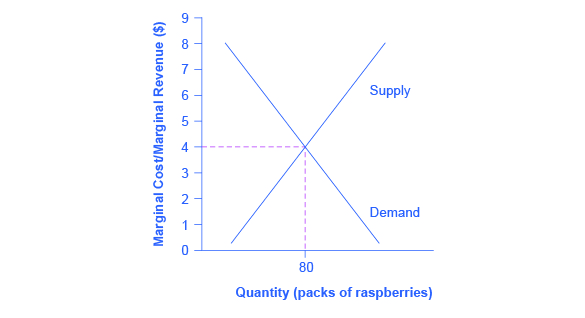 Figure 8.4. Marginal Revenues and Marginal Costs at the Raspberry Farm: Raspberry Market. The equilibrium price of raspberries is determined through the interaction of market supply and market demand at $4.00.

Table 8.3 Marginal Revenues and Marginal Costs at the Raspberry Farm

The profit-maximizing choice for a perfectly competitive firm will occur where marginal revenue is equal to marginal cost—that is, where MR = MC. A profit-seeking firm should keep expanding production as long as MR > MC. But at the level of output where MR = MC, the firm should recognize that it has achieved the highest possible level of economic profits. (In the example above, the profit maximizing output level is between 70 and 80 units of output, but the firm will not know they’ve maximized profit until they reach 80, where MR = MC.) Expanding production into the zone where MR < MC will only reduce economic profits. Because the marginal revenue received by a perfectly competitive firm is equal to the price P, so that P = MR, the profit-maximizing rule for a perfectly competitive firm can also be written as a recommendation to produce at the quantity where P = MC.

Self Check: Costs and Revenues in Competitive Markets