Private decisions in the marketplace may not be consistent with the maximization of the net benefit of a particular activity. The failure of private decisions in the marketplace to achieve an efficient allocation of scarce resources is called market failure. Markets will not generate an efficient allocation of resources if they are not competitive or if property rights are not well defined and fully transferable. Either condition will mean that decision makers are not faced with the marginal benefits and costs of their choices.

Imagine you’re considering going for an afternoon drive. You’ll face some, but not all, of the opportunity costs involved in that choice. In particular, your choice to go for a drive would increase air pollution and might increase traffic congestion. That means that, in weighing the marginal benefits and marginal costs of going for a drive, not all of the costs would be counted. As a result, the net benefit of the allocation of resources such as the air might not be maximized.

Suppose that in the course of production, the firms in a particular industry generate air pollution. These firms thus impose costs on others, but they do so outside the context of any market exchange—no agreement has been made between the firms and the people affected by the pollution. The firms thus will not be faced with the costs of their action. A cost imposed on others outside of any market exchange is an external cost.

We saw an example of an external cost in our imaginary decision to go for a drive. Here is another: violence on television, in the movies, and in video games. Many critics argue that the violence that pervades these media fosters greater violence in the real world. By the time a child who spends the average amount of time watching television finishes elementary school, he or she will have seen 100,000 acts of violence, including 8,000 murders, according to the American Psychological Association.

Thousands of studies of the relationship between violence in the media and behavior have concluded that there is a link between watching violence and violent behaviors. Video games are a major element of the problem, as young children now spend hours each week playing them. Fifty percent of fourth-grade graders say that their favorite video games are the “first person shooter” type.

Any tendency of increased violence resulting from increased violence in the media constitutes an external cost of such media. The American Academy of Pediatrics reported in 2001 that homicides were the fourth leading cause of death among children between the ages of 10 and 14 and the second leading cause of death for people aged 15 to 24 and has recommended a reduction in exposure to media violence.

An action taken by a person or firm can also create benefits for others, again in the absence of any market agreement; such a benefit is called an external benefit. A firm that builds a beautiful building generates benefits to everyone who admires it; such benefits are external.

The case of the polluting firms is illustrated in Figure 6.11 “External Costs.” The industry supply curve S1 reflects private marginal costs, MCp. The market price is Pp for a quantity Qp. This is the solution that would occur if firms generating external costs were not forced to pay those costs. If the external costs generated by the pollution were added, the new supply curve S2 would reflect higher marginal costs, MCe. Faced with those costs, the market would generate a lower equilibrium quantity, Qe. That quantity would command a higher price, Pe. The failure to confront producers with the cost of their pollution means that consumers do not pay the full cost of the good they are purchasing. 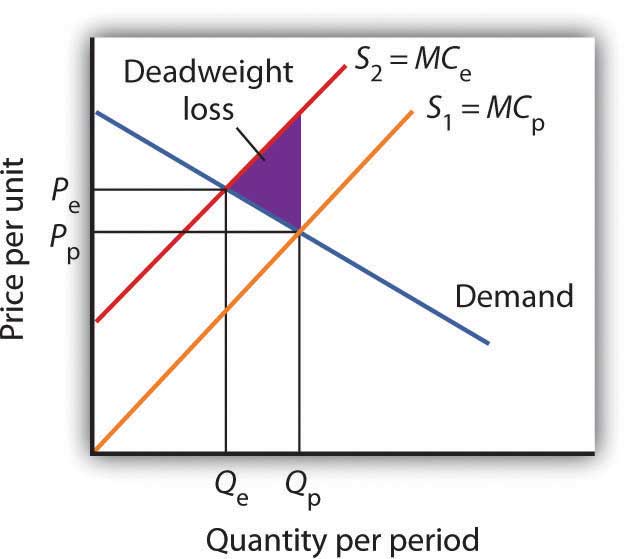 Figure 6.11 External Costs. When firms in an industry generate external costs, the supply curve S1 reflects only their private marginal costs, MCP. Forcing firms to pay the external costs they impose shifts the supply curve to S2, which reflects the full marginal cost of the firms’ production, MCe. Output is reduced and price goes up. The deadweight loss that occurs when firms are not faced with the full costs of their decisions is shown by the shaded area in the graph.

The level of output and the level of pollution are therefore higher than would be economically efficient. If a way could be found to confront producers with the full cost of their choices, then consumers would be faced with a higher cost as well. Figure 6.11 “External Costs” shows that consumption would be reduced to the efficient level, Qe, at which demand and the full marginal cost curve (MCe) intersect. The deadweight loss generated by allowing the external cost to be generated with an output of Qp is given as the shaded region in the graph.

If an activity generates external costs, the decision makers generating the activity will not be faced with its full costs. Agents who impose these costs will carry out their activities beyond the efficient level; those who consume them, facing too low a price, will consume too much. As a result, producers and consumers will carry out an excessive quantity of the activity.

In such cases, government may try to intervene to reduce the level of the activity toward the efficient quantity. In the case shown in Figure 6.11 “External Costs,” for example, firms generating an external cost have a supply curveS1 that reflects their private marginal costs, MCp. A per-unit pollution fee imposed on the firms would increase their marginal costs to MCe, thus shifting the supply curve to S2, and the efficient level of production would emerge.

Taxes or other restrictions may be imposed on the activity that generates the external cost in an effort to confront decision makers with the costs that they are imposing. In many areas, firms and consumers that pollute rivers and lakes are required to pay fees based on the amount they pollute. Firms in many areas are required to purchase permits in order to pollute the air; the requirement that permits be purchased serves to confront the firms with the costs of their choices.

Another approach to dealing with problems of external costs is direct regulation. For example, a firm may be ordered to reduce its pollution. A person who turns his or her front yard into a garbage dump may be ordered to clean it up. Participants at a raucous party may be told to be quiet. Alternative ways of dealing with external costs are discussed later in the text.

Self Check: Positive and Negative Externalities