Because of the complexity of oligopoly, which is the result of mutual interdependence among firms, there is no single, generally-accepted theory of how oligopolies behave, in the same way that we have theories for all the other market structures. Instead, economists use game theory, a branch of mathematics that analyzes situations in which players must make decisions and then receive payoffs based on what other players decide to do. Game theory has found widespread applications in the social sciences, as well as in business, law, and military strategy.

Two co-conspiratorial criminals are arrested. When they are taken to the police station, they refuse to say anything and are put in separate interrogation rooms. Eventually, a police officer enters the room where Prisoner A is being held and says: “You know what? Your partner in the other room is confessing. So your partner is going to get a light prison sentence of just one year, and because you’re remaining silent, the judge is going to stick you with eight years in prison. Why don’t you get smart? If you confess, too, we’ll cut your jail time down to five years, and your partner will get five years, also.” Over in the next room, another police officer is giving exactly the same speech to Prisoner B. What the police officers do not say is that if both prisoners remain silent, the evidence against them is not especially strong, and the prisoners will end up with only two years in jail each.

The game theory situation facing the two prisoners is shown in Table 10.2. To understand the dilemma, first consider the choices from Prisoner A’s point of view. If A believes that B will confess, then A ought to confess, too, so as to not get stuck with the eight years in prison. But if A believes that B will not confess, then A will be tempted to act selfishly and confess, so as to serve only one year. The key point is that A has an incentive to confess regardless of what choice B makes! B faces the same set of choices, and thus will have an incentive to confess regardless of what choice A makes. Confess is considered the dominant strategy or the strategy an individual (or firm) will pursue regardless of the other individual’s (or firm’s) decision. The result is that if prisoners pursue their own self-interest, both are likely to confess, and end up doing a total of 10 years of jail time between them.

The game is called a dilemma because if the two prisoners had cooperated by both remaining silent, they would only have had to serve a total of four years of jail time between them. If the two prisoners can work out some way of cooperating so that neither one will confess, they will both be better off than if they each follow their own individual self-interest, which in this case leads straight into longer jail terms.

THE OLIGOPOLY VERSION OF THE PRISONER’S DILEMMA

The members of an oligopoly can face a prisoner’s dilemma, also. If each of the oligopolists cooperates in holding down output, then high monopoly profits are possible. Each oligopolist, however, must worry that while it is holding down output, other firms are taking advantage of the high price by raising output and earning higher profits. Table 10.3 shows the prisoner’s dilemma for a two-firm oligopoly—known as a duopoly. If Firms A and B both agree to hold down output, they are acting together as a monopoly and will each earn $1,000 in profits. However, both firms’ dominant strategy is to increase output, in which case each will earn $400 in profits.

Can the two firms trust each other? Consider the situation of Firm A:

The result of this prisoner’s dilemma is often that even though A and B could make the highest combined profits by cooperating in producing a lower level of output and acting like a monopolist, the two firms may well end up in a situation where they each increase output and earn only $400 each in profits. The following example discusses one cartel scandal in particular.

What is the Lysine cartel?

Lysine, a $600 million-a-year industry, is an amino acid used by farmers as a feed additive to ensure the proper growth of swine and poultry. The primary U.S. producer of lysine is Archer Daniels Midland (ADM), but several other large European and Japanese firms are also in this market. For a time in the first half of the 1990s, the world’s major lysine producers met together in hotel conference rooms and decided exactly how much each firm would sell and what it would charge. The U.S. Federal Bureau of Investigation (FBI), however, had learned of the cartel and placed wire taps on a number of their phone calls and meetings.

From FBI surveillance tapes, following is a comment that Terry Wilson, president of the corn processing division at ADM, made to the other lysine producers at a 1994 meeting in Mona, Hawaii:

I wanna go back and I wanna say something very simple. If we’re going to trust each other, okay, and if I’m assured that I’m gonna get 67,000 tons by the year’s end, we’re gonna sell it at the prices we agreed to . . . The only thing we need to talk about there because we are gonna get manipulated by these [expletive] buyers—they can be smarter than us if we let them be smarter. . . . They [the customers] are not your friend. They are not my friend. And we gotta have ’em, but they are not my friends. You are my friend. I wanna be closer to you than I am to any customer. Cause you can make us … money. … And all I wanna tell you again is let’s—let’s put the prices on the board. Let’s all agree that’s what we’re gonna do and then walk out of here and do it.

The price of lysine doubled while the cartel was in effect. Confronted by the FBI tapes, Archer Daniels Midland pled guilty in 1996 and paid a fine of $100 million. A number of top executives, both at ADM and other firms, later paid fines of up to $350,000 and were sentenced to 24–30 months in prison.

In another one of the FBI recordings, the president of Archer Daniels Midland told an executive from another competing firm that ADM had a slogan that, in his words, had “penetrated the whole company.” The company president stated the slogan this way: “Our competitors are our friends. Our customers are the enemy.” That slogan could stand as the motto of cartels everywhere.

HOW TO ENFORCE COOPERATION

Perhaps the easiest approach for colluding oligopolists, as you might imagine, would be to sign a contract with each other that they will hold output low and keep prices high. If a group of U.S. companies signed such a contract, however, it would be illegal. Certain international organizations, like the nations that are members of the Organization of Petroleum Exporting Countries (OPEC), have signed international agreements to act like a monopoly, hold down output, and keep prices high so that all of the countries can make high profits from oil exports. Such agreements, however, because they fall in a gray area of international law, are not legally enforceable. If Nigeria, for example, decides to start cutting prices and selling more oil, Saudi Arabia cannot sue Nigeria in court and force it to stop.

Visit the Organization of the Petroleum Exporting Countries website and learn more about its history and how it defines itself.

Because oligopolists cannot sign a legally enforceable contract to act like a monopoly, the firms may instead keep close tabs on what other firms are producing and charging. Alternatively, oligopolists may choose to act in a way that generates pressure on each firm to stick to its agreed quantity of output.

One example of the pressure these firms can exert on one another is the kinked demand curve, in which competing oligopoly firms commit to match price cuts, but not price increases. This situation is shown in Figure 10.5. Say that an oligopoly airline has agreed with the rest of a cartel to provide a quantity of 10,000 seats on the New York to Los Angeles route, at a price of $500. This choice defines the kink in the firm’s perceived demand curve. The reason that the firm faces a kink in its demand curve is because of how the other oligopolists react to changes in the firm’s price. If the oligopoly decides to produce more and cut its price, the other members of the cartel will immediately match any price cuts—and therefore, a lower price brings very little increase in quantity sold.

If one firm cuts its price to $300, it will be able to sell only 11,000 seats. However, if the airline seeks to raise prices, the other oligopolists will not raise their prices, and so the firm that raised prices will lose a considerable share of sales. For example, if the firm raises its price to $550, its sales drop to 5,000 seats sold. Thus, if oligopolists always match price cuts by other firms in the cartel, but do not match price increases, then none of the oligopolists will have a strong incentive to change prices, since the potential gains are minimal. This strategy can work like a silent form of cooperation, in which the cartel successfully manages to hold down output, increase price, and share a monopoly level of profits even without any legally enforceable agreement. 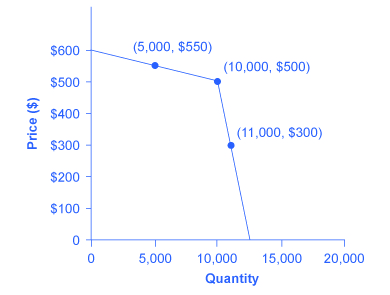 Figure 10.5. A Kinked Demand Curve. Consider a member firm in an oligopoly cartel that is supposed to produce a quantity of 10,000 and sell at a price of $500. The other members of the cartel can encourage this firm to honor its commitments by acting so that the firm faces a kinked demand curve. If the oligopolist attempts to expand output and reduce price slightly, other firms also cut prices immediately—so if the firm expands output to 11,000, the price per unit falls dramatically, to $300. On the other side, if the oligopoly attempts to raise its price, other firms will not do so, so if the firm raises its price to $550, its sales decline sharply to 5,000. Thus, the members of a cartel can discipline each other to stick to the pre-agreed levels of quantity and price through a strategy of matching all price cuts but not matching any price increases.

Many real-world oligopolies, prodded by economic changes, legal and political pressures, and the egos of their top executives, go through episodes of cooperation and competition. If oligopolies could sustain cooperation with each other on output and pricing, they could earn profits as if they were a single monopoly. However, each firm in an oligopoly has an incentive to produce more and grab a bigger share of the overall market; when firms start behaving in this way, the market outcome in terms of prices and quantity can be similar to that of a highly competitive market.