A price floor is the lowest legal price that can be paid in markets for goods and services, labor, or financial capital. Perhaps the best-known example of a price floor is the minimum wage, which is based on the normative view that someone working full-time ought to be able to afford a basic standard of living. The federal minimum wage at the end of 2015 was $7.25 per hour, which yields an income for a single person slightly higher than the poverty line. As the cost of living rises over time, the Congress periodically raises the federal minimum wage. 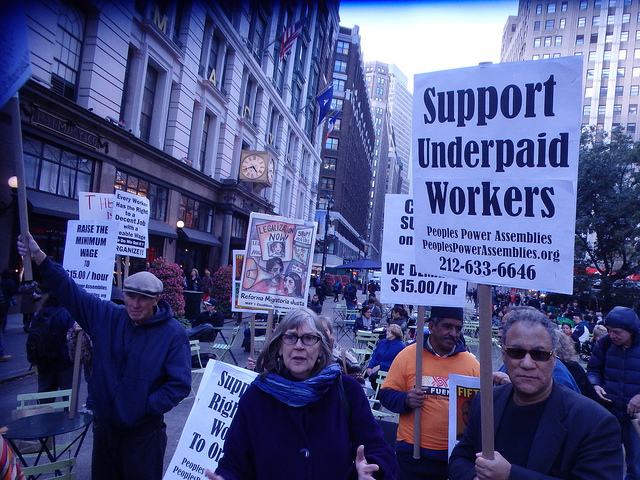 Image from the NYC Rally To Raise The Minimum Wage, by The All Nite Images. Accessed via Flickr, CC-BY-SA.

Price floors are sometimes called “price supports,” because they support a price by preventing it from falling below a certain level. Around the world, many countries have passed laws to create agricultural price supports. Farm prices and thus farm incomes fluctuate, sometimes widely. So even if, on average, farm incomes are adequate, some years they can be quite low. The purpose of price supports is to prevent these swings.

The most common way price supports work is that the government enters the market and buys up the product, adding to demand to keep prices higher than they otherwise would be. According to Reuters News, the European Union (EU) will spend about $60 billion per year, or roughly 38% of the EU budget, on price supports for Europe’s farmers from 2014 to 2020.

The high-income areas of the world, including the United States, Europe, and Japan, are estimated to spend roughly $1 billion per day in supporting their farmers. If the government is willing to purchase the excess supply (or to provide payments for others to purchase it), then farmers will benefit from the price floor, but taxpayers and consumers of food will pay the costs. Numerous proposals have been offered for reducing farm subsidies. In many countries, however, political support for subsidies for farmers remains strong. Either because this is viewed by the population as supporting the traditional rural way of life or because of the lobbying power of the agro-business industry.

For more detail on the effects price ceilings and floors have on demand and supply, see the following Application feature.

Figure 3.22. European Wheat Prices: A Price Floor Example. The intersection of demand (D) and supply (S) would be at the equilibrium point E0.

DEMAND AND SUPPLY AS A SOCIAL ADJUSTMENT MECHANISM 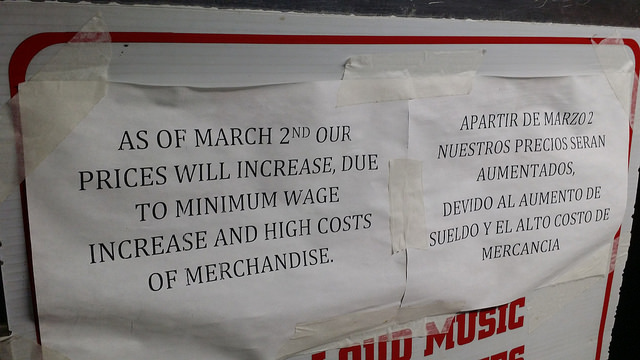 Image of store publicizing their price increases. By George Kelley. Accessed via Flickr and licensed under a CC-BY-ND license.