THE CHOICES IN REGULATING A NATURAL MONOPOLY 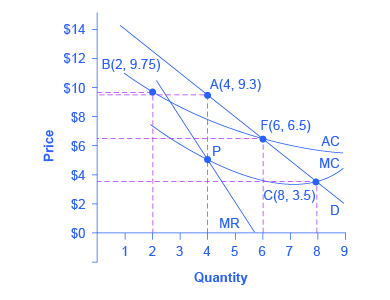 Figure 11.3. Regulatory Choices in Dealing with Natural Monopoly. A natural monopoly will maximize profits by producing at the quantity where marginal revenue (MR) equals marginal costs (MC) and by then looking to the market demand curve to see what price to charge for this quantity. This monopoly will produce at point A, with a quantity of 4 and a price of 9.3. If antitrust regulators split this company exactly in half, then each half would produce at point B, with average costs of 9.75 and output of 2. The regulators might require the firm to produce where marginal cost crosses the market demand curve at point C. However, if the firm is required to produce at a quantity of 8 and sell at a price of 3.5, the firm will suffer from losses. The most likely choice is point F, where the firm is required to produce a quantity of 6 and charge a price of 6.5.

Perhaps the most plausible option for the regulator is point F; that is, to set the price where AC crosses the demand curve at an output of 6 and a price of 6.5. This plan makes some sense at an intuitive level: let the natural monopoly charge enough to cover its average costs and earn a normal rate of profit, so that it can continue operating, but prevent the firm from raising prices and earning abnormally high monopoly profits, as it would at the monopoly choice A. Of course, determining this level of output and price with the political pressures, time constraints, and limited information of the real world is much harder than identifying the point on a graph. For more on the problems that can arise from a centrally determined price, see the discussion of price floors and price ceilings in Demand and Supply.

Indeed, regulators of public utilities for many decades followed the general approach of attempting to choose a point like F in Figure 11.3. They calculated the average cost of production for the water or electricity companies, added in an amount for the normal rate of profit the firm should expect to earn, and set the price for consumers accordingly. This method was known as cost-plus regulation.