Reading: The Supply of Labor

The Supply of Labor

The demand for labor is one determinant of the equilibrium wage and equilibrium quantity of labor in a perfectly competitive market. The supply of labor, of course, is the other.

Economists think of the supply of labor as a problem in which individuals weigh the opportunity cost of various activities that can fill an available amount of time and choose how to allocate it. Everyone has 24 hours in a day. There are lots of uses to which we can put our time: we can raise children, work, sleep, play, or participate in volunteer efforts. To simplify our analysis, let us assume that there are two ways in which an individual can spend his or her time: in work or in leisure. Leisure is a type of consumption good; individuals gain utility directly from it. Work provides income that, in turn, can be used to purchase goods and services that generate utility.

The more work a person does, the greater his or her income, but the smaller the amount of leisure time available. An individual who chooses more leisure time will earn less income than would otherwise be possible. There is thus a tradeoff between leisure and the income that can be earned from work. We can think of the supply of labor as the flip side of the demand for leisure. The more leisure people demand, the less labor they supply.

Two aspects of the demand for leisure play a key role in understanding the supply of labor. First, leisure is a normal good. All other things unchanged, an increase in income will increase the demand for leisure. Second, the opportunity cost or “price” of leisure is the wage an individual can earn. A worker who can earn $10 per hour gives up $10 in income by consuming an extra hour of leisure. The $10 wage is thus the price of an hour of leisure. A worker who can earn $20 an hour faces a higher price of leisure.

Suppose wages rise. The higher wage increases the price of leisure. We saw in the module on consumer choice that consumers substitute more of other goods for a good whose price has risen. The substitution effect of a higher wage causes the consumer to substitute labor for leisure. To put it another way, the higher wage induces the individual to supply a greater quantity of labor.

We can see the logic of this substitution effect in terms of the marginal decision rule. Suppose an individual is considering a choice between extra leisure and the additional income from more work. Let MULe denote the marginal utility of an extra hour of leisure. What is the price of an extra hour of leisure? It is the wage W that the individual forgoes by not working for an hour. The extra utility of $1 worth of leisure is thus given by MULe/W.

Suppose, for example, that the marginal utility of an extra hour of leisure is 20 and the wage is $10 per hour. Then MULe/W equals 20/10, or 2. That means that the individual gains 2 units of utility by spending an additional $1 worth of time on leisure. For a person facing a wage of $10 per hour, $1 worth of leisure would be the equivalent of 6 minutes of leisure time.

Let MUY be the marginal utility of an additional $1 of income (Y is the abbreviation economists generally assign to income). The price of $1 of income is just $1, so the price of income PY is always $1. Utility is maximized by allocating time between work and leisure so that:

Faced with the inequality above, an individual will give up some leisure time and spend more time working. As the individual does so, however, the marginal utility of the remaining leisure time rises and the marginal utility of the income earned will fall. The individual will continue to make the substitution until the two sides of the equation are again equal. For a worker, the substitution effect of a wage increase always reduces the amount of leisure time consumed and increases the amount of time spent working. A higher wage thus produces a positive substitution effect on labor supply.

But the higher wage also has an income effect. An increased wage means a higher income, and since leisure is a normal good, the quantity of leisure demanded will go up. And that means a reduction in the quantity of labor supplied.

Figure 12.6 illustrates the opposite pull of the substitution and income effects of a wage change facing an individual worker. A janitor, Meredith Wilson, earns $10 per hour. She now works 42 hours per week, on average, earning $420.

Now suppose Ms. Wilson receives a $5 raise to $15 per hour. As shown in Figure 12.6, the substitution effect of the wage change induces her to increase the quantity of labor she supplies; she substitutes some of her leisure time for additional hours of work. But she is richer now; she can afford more leisure. At a wage of $10 per hour, she was earning $420 per week. She could earn that same amount at the higher wage in just 28 hours. With her higher income, she can certainly afford more leisure time. The income effect of the wage change is thus negative; the quantity of labor supplied falls. The effect of the wage increase on the quantity of labor Ms. Wilson actually supplies depends on the relative strength of the substitution and income effects of the wage change. We will see what Ms. Wilson decides to do in the next section.

Wage Changes and the Slope of the Supply Curve

What would any one individual’s supply curve for labor look like? One possibility is that over some range of labor hours supplied, the substitution effect will dominate. Because the marginal utility of leisure is relatively low when little labor is supplied (that is, when most time is devoted to leisure), it takes only a small increase in wages to induce the individual to substitute more labor for less leisure. Further, because few hours are worked, the income effect of those wage changes will be small.

Figure 12.7 shows Meredith Wilson’s supply curve for labor. At a wage of $10 per hour, she supplies 42 hours of work per week (point A). An increase in her wage to $15 per hour boosts her quantity supplied to 48 hours per week (point B). The substitution effect thus dominates the income effect of a higher wage. 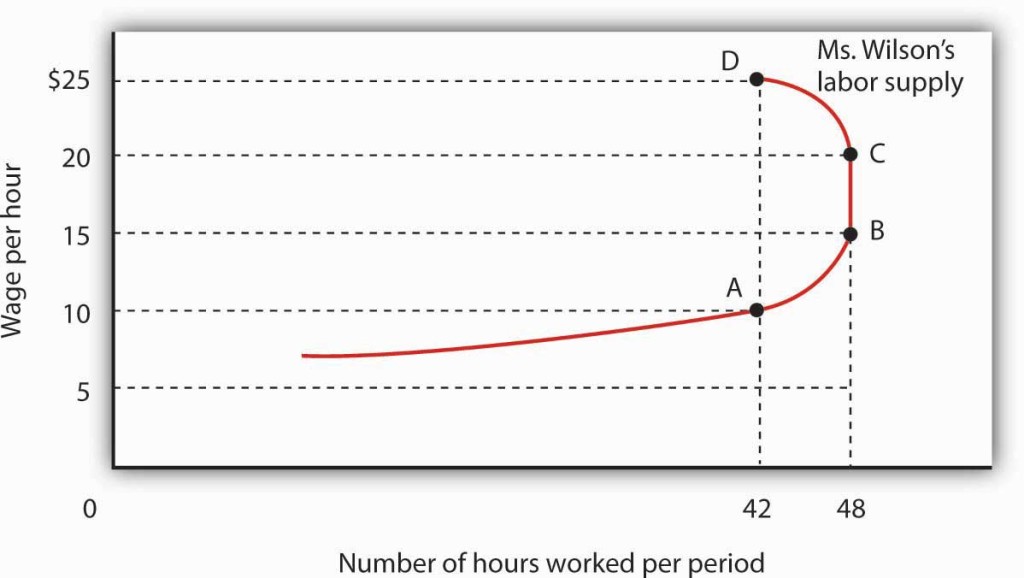 It is possible that beyond some wage rate, the negative income effect of a wage increase could just offset the positive substitution effect; over that range, a higher wage would have no effect on the quantity of labor supplied. That possibility is illustrated between points B and C on the supply curve in Figure 12.7; Ms. Wilson’s supply curve is vertical. As wages continue to rise, the income effect becomes even stronger, and additional increases in the wage reduce the quantity of labor she supplies. The supply curve illustrated here bends backward beyond point C and thus assumes a negative slope. The supply curve for labor can thus slope upward over part of its range, become vertical, and then bend backward as the income effect of higher wages begins to dominate the substitution effect.

It is quite likely that some individuals have backward-bending supply curves for labor—beyond some point, a higher wage induces those individuals to work less, not more. However, supply curves for labor in specific labor markets are generally upward sloping. As wages in one industry rise relative to wages in other industries, workers shift their labor to the relatively high-wage one. An increased quantity of labor is supplied in that industry. While some exceptions have been found, the mobility of labor between competitive labor markets is likely to prevent the total number of hours worked from falling as the wage rate increases. Thus we shall assume that supply curves for labor in particular markets are upward sloping.

What events shift the supply curve for labor? People supply labor in order to increase their utility—just as they demand goods and services in order to increase their utility. The supply curve for labor will shift in response to changes in the same set of factors that shift demand curves for goods and services.

An increase in income will increase the demand for leisure, reducing the supply of labor. We must be careful here to distinguish movements along the supply curve from shifts of the supply curve itself. An income change resulting from a change in wages is shown by a movement along the curve; it produces the income and substitution effects we already discussed. But suppose income is from some other source: a person marries and has access to a spouse’s income, or receives an inheritance, or wins a lottery. Those nonlabor increases in income are likely to reduce the supply of labor, thereby shifting the supply curve for labor of the recipients to the left.

Changes in the Prices of Related Goods and Services

Several goods and services are complements of labor. If the cost of child care (a complement to work effort) falls, for example, it becomes cheaper for workers to go to work, and the supply of labor tends to increase. If recreational activities (which are a substitute for work effort) become much cheaper, individuals might choose to consume more leisure time and supply less labor.

An increase in population increases the supply of labor; a reduction lowers it. Labor organizations have generally opposed increases in immigration because their leaders fear that the increased number of workers will shift the supply curve for labor to the right and put downward pressure on wages.

One change in expectations that could have an effect on labor supply is life expectancy. Another is confidence in the availability of Social Security. Suppose, for example, that people expect to live longer yet become less optimistic about their likely benefits from Social Security. That could induce an increase in labor supply.

A change in wages in related occupations could affect supply in another. A sharp reduction in the wages of surgeons, for example, could induce more physicians to specialize in, say, family practice, increasing the supply of doctors in that field. Improved job opportunities for women in other fields appear to have decreased the supply of nurses, shifting the supply curve for nurses to the left.

Worker preferences regarding specific occupations can also affect labor supply. A reduction in willingness to take risks could lower the supply of labor available for risky occupations such as farm work (the most dangerous work in the United States), law enforcement, and fire fighting. An increased desire to work with children could raise the supply of child-care workers, elementary school teachers, and pediatricians.